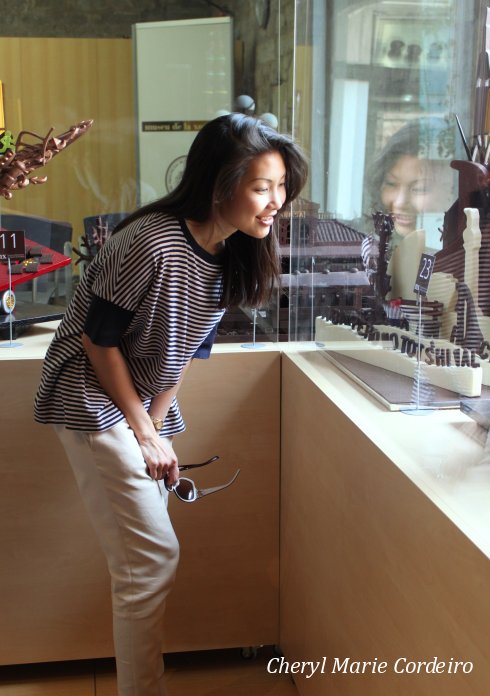 At the Chocolate Museum, just outside the kitchen where the museum holds classes on chocolate confection.
JE Nilsson and CM Cordeiro Nilsson © 2011

Although Spain’s connection with Mexico in the 1500s means that cacao beans and chocolate would be as native to Spain as coconuts and pineapples are to Singapore, I must say that it still took some doing exploring the numerous cafés in Barcelona, before I settled for a favourite place of mine that served my cup of hot chocolate with an added shot of espresso in it!

If you’re a chocolate lover like me, then perhaps nobody can stop you from immediately hitting any café in sight as soon as you get off the plane in Barcelona for a cup of Spanish hot chocolate. At least, that’s what happened to me.

But with that done I brusquely encountered a cultural difference of what a cup of hot chocolate laced with espresso is in Spain.

While thick, sticky and not necessarily sweet would be my favourite, in Spain, when ordering ‘hot chocolate’ or xocolata calenta, you could expect in some cafés and restaurants that the hot drink served is literally a bar of chocolate, warmed and in molten state, better consumed with a spoon than sipped. 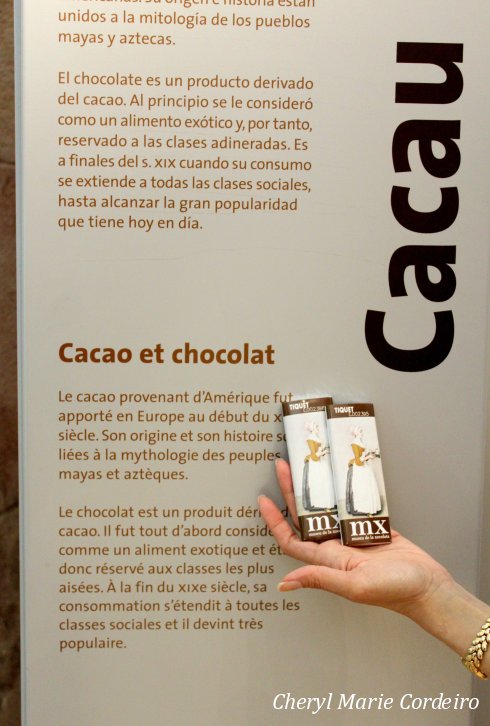 Entrance tickets you can eat – chocolate bar for tickets at the Museu de la Xocolata.

More than consuming chocolate in the form of hot drinks, single beaned chocolate ice-cream, chocolate bars or beautifully formed chocolate pralines and truffles, I was absolutely delighted to find an entire museum devoted to the history in narrative, of Chocolate, Barcelona’s Museu de la Xocolata (MX). 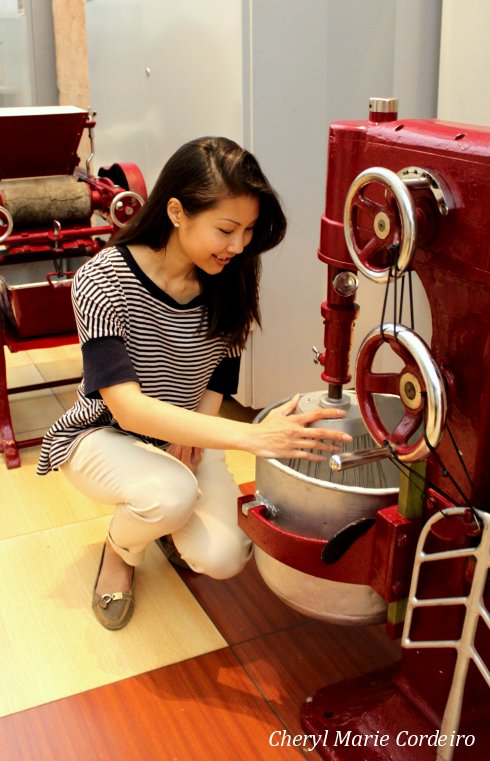 In one section of the Chocolate Museum in Barcelona, you’ll find a range of old fashioned machines used in various stages of chocolate making. 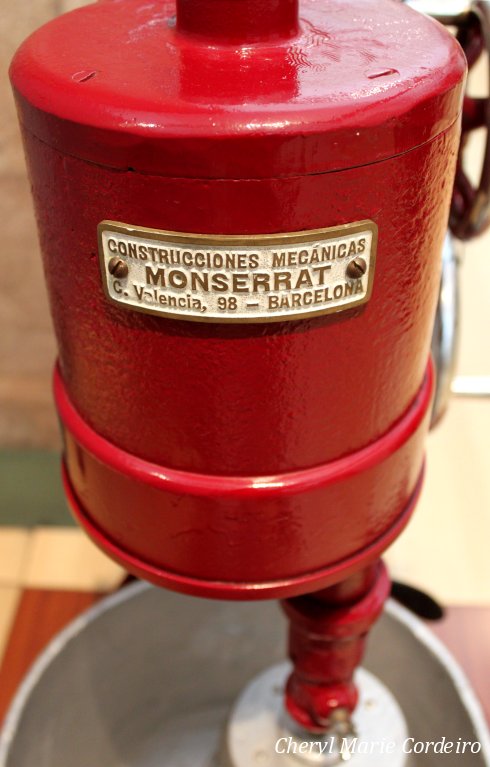 In the Chocolate Museum in Barcelona a floor standing mixer in red that caught my attention. This beauty of a machine was manufactured in Montserrat, right here near Barcelona!

The presence of the museum is somewhat overshadowed by the Museu Picasso, since there is always some art and music event going on at their premise. MX is also located in District 1, and once discovered, you’ll find it in the oldest quarter of the Old City of Barcelona, Ciutat Vella that is within walking distance from the Mediterranean beach front and the more modern extension of the city, l’Eixample, snuggled in amidst numerous gorgeous art boutiques, trendy flavoured cafés and bars that stud the La Ribera and El Born district on Carrer del Comerc.

Come evening, you can look forward to plenty of beautiful people pouring into the streets in this quarter of the city, as this district is as trendy as it is touristic.

Two places that I would recommend for that hot chocolate and to grab a bite of Sacher Chocolate Cake – Granja Viader and Escriba Barcelona. 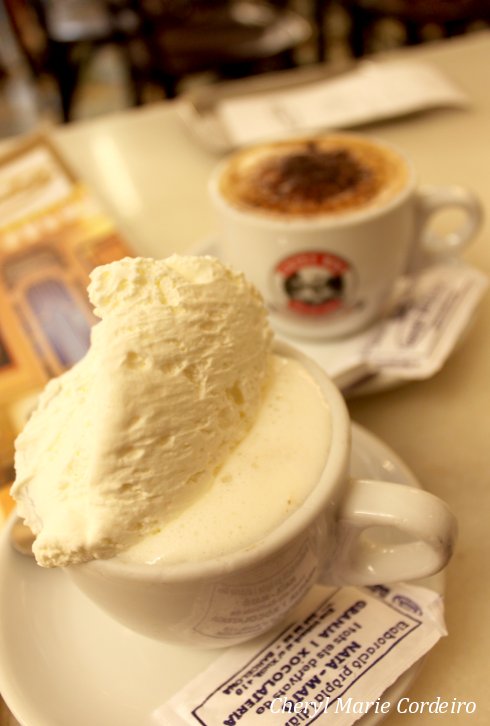 A generous dose of whipped cream that brings on a smile in most anyone!

It took a couple of days for me to meet with this grand old dame of a place during opening hours, only because I seemed to walk past Granja Viader during siesta, either myself wanting a rest and looking for a hot chocolate stop on some days, or simply cantering past because I was on my way to another place. 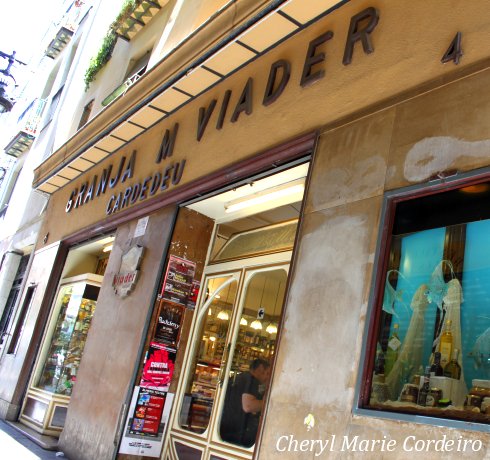 Located along a pinstripe street, the entrance is nondescript, even when the place is open.

Granja Viader has a history dating back to 1870 and you can feel its history as you walk in and settle at a table. 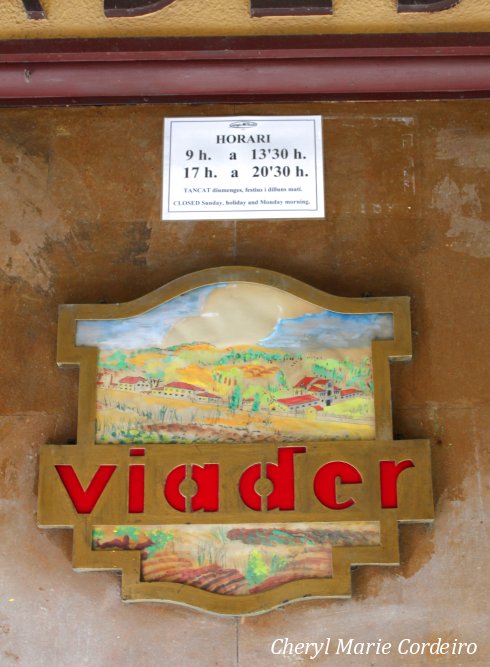 In keeping with tradition, Granja Viader keeps its siesta hours.

From the delicatesse counter, the numerous articles that sit framed on the walls, the tiles and the dark wooden chairs, the place makes you feel as if you’re coming home for something to eat and drink. The atmosphere is relaxed and casual, where the people in the café make you feel as if they’ve known you and your habits for years. Almost everything you ask for is possible and not the least bit strange in combination. Here is where good friends meet over breakfast and come together again after sundown to exchange the latest news of the day. 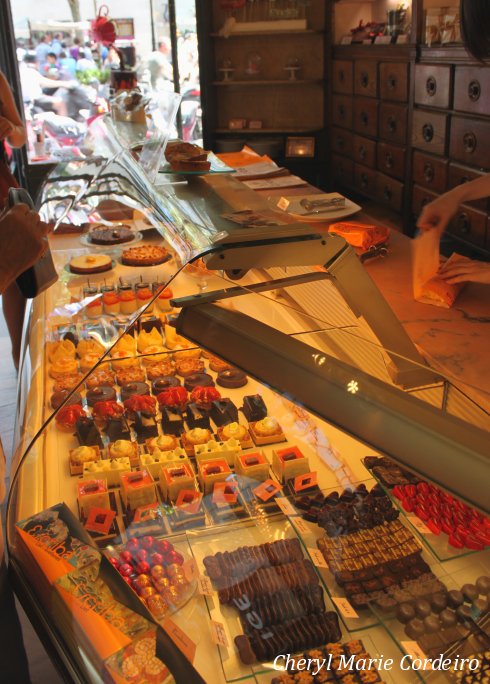 Escribà has several outlets in Barcelona, this is the one near the Boqueria wet market.

While several travel guides have recommended that visitors skip food outlets along La Rambla, recommending moving into the side lanes for more authentic Catalonian food, Escribà Barcelona, a pasteleria that is near the La Boqueria wet market, is not one to miss for a cup of hot chocolate and that Sacher chocolate cake laced with apricot inside. 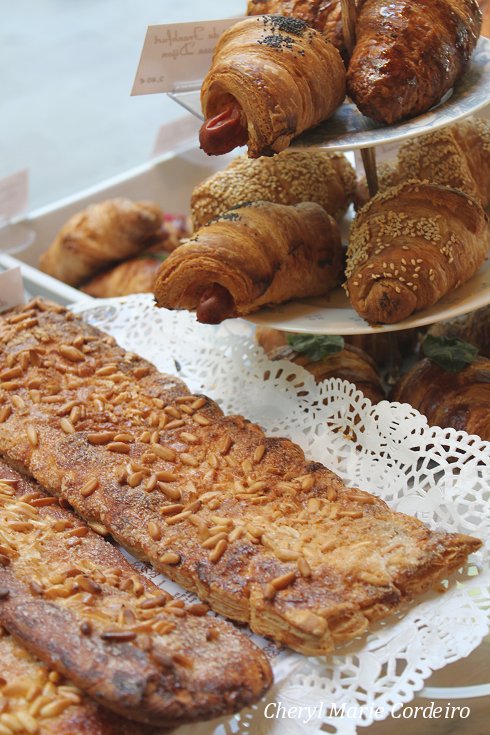 Some of Escribà’s pastry assortment. 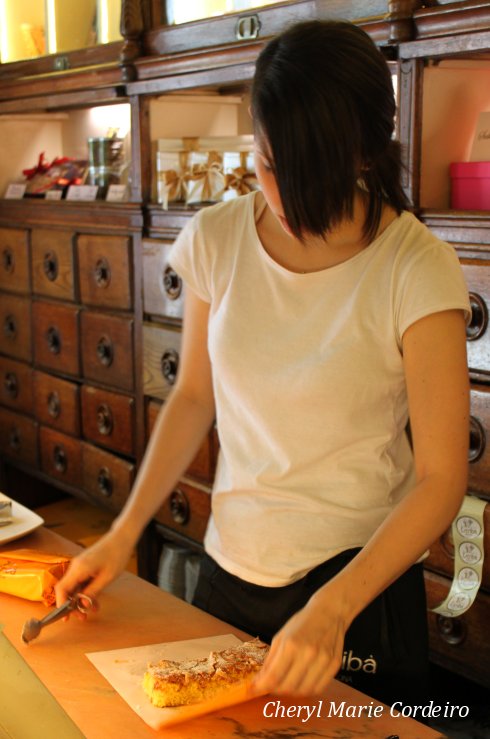 When I was there, an old lady dressed in Sunday best, walked in and purchased an entire orange cake to-go. Here, the packing of her order in two separate packages, neatly wrapped and orange ribboned, in waxed paper. 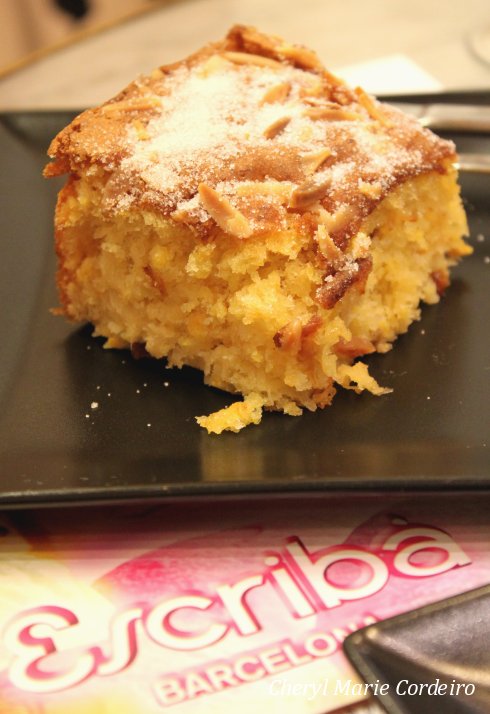 This sugar encrusted orange cake is another of Escribà’s signature confections. 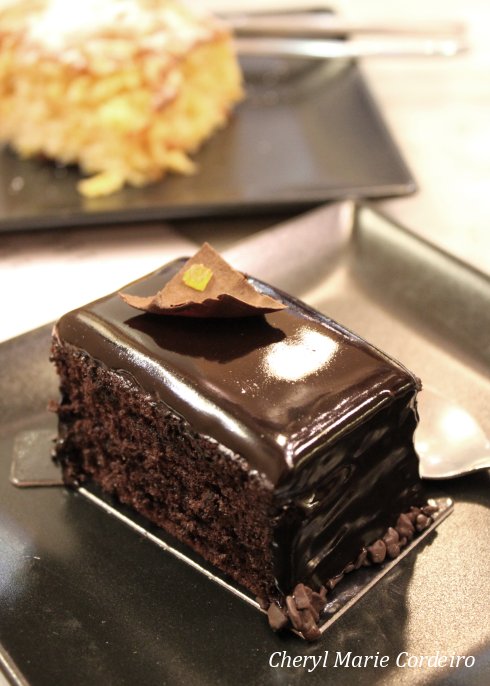 A perfectly glossed and sliced, Sacher cake. Sacher cakes are popular in cafés in Barcelona, with each café having a variation of its own. It’ll be worthwhile and fun to make your rounds to find your favourite. Escribà’s Sacher cake is as beautiful to behold as it is gorgeous and decadent to the palate – it was difficult to not order seconds of this cake!

Walking through the narrow streets of Barri Gotic in Barcelona, navigating from the Carrer d’en Xuclà, the chocolate street, towards the chocolate museum, will take you quite close to the place where King Ferdinand and Queen Isabella of Spain actually received Christopher Columbus when he first returned from America in 1493.

At the lower end of La Rambla when you walk along it towards the harbour, you will eventually also end up at the Monument a Colom, a 60 m tall column with a statue of Columbus on top of it that serves as a reminder about that it was actually here that he returned to Spain to report to the country’s King and Queen after his first voyage to the Americas. Interestingly enough if you look at it, the statue, instead of pointing to the west where he went, points east, the direction in which he actually wanted to go.

I think there is a lesson in here somewhere about that you might not always get where you want to go, but it might be OK anyway. It is certainly true in the narrow lanes of Barri Gotic, and in this case, Columbus was indeed the first person to bring chocolate beans to Barcelona, though the reason was not that the drink was nice but due to the fact that cacao beans actually counted as money where they came from.

While it was reported that the going rate in 1513 was that 100 cocoa beans would bring you a slave, 10 cocoa beans the services of a prostitute and 4 cocoa beans, would get you a rabbit for dinner, it was Hernando Cortez that in 1519 decided to establish a cocoa plantation in the name of Spain – since “henceforth, money would be cultivated” – an thus that it was he who started the actual trade in cocoa beans.

So, if we chocolate fans were in command it would have been him we would have cast in bronze on that Column in the harbor.

And made him point west.