Semla in a bowl of warm milk, a northern Swedish tradition 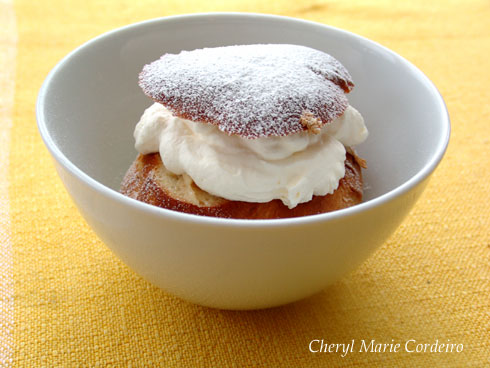 Our homemade semla which has chopped almonds with a marzipan filling in a cardamon bun. This is topped with a generous dollop of freshly whipped cream.
Photo for CMC by: Jan-Erik Nilsson © 2009.

It doesn’t matter if Fettisdagen was just over and that we’ve been eating semlor for about a month now. With the exception of high summer, I think I pretty much could enjoy a semla any day in the year, though of course enjoying one particularly on Fat Tuesday or Mardi Gras would be double the fun and delight! 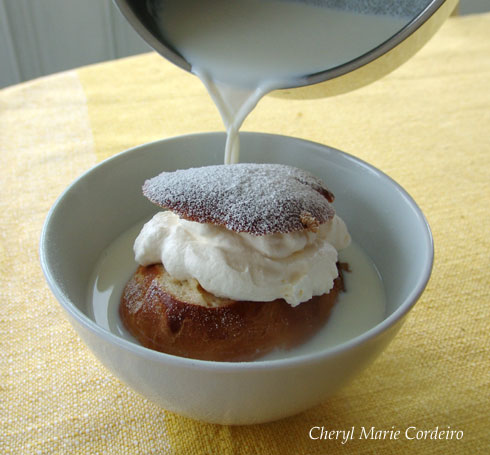 Warm milk goes into the bowl where the semla sits.

Having a semla sit in a warm bath of milk before eating is one of my favourite ways to enjoy this almond marzipan filled cardamon bun, though many Swedes may still prefer if milk was served on the side, in a glass. The tradition of eating a semla in warm milk is apparently northern Swedish, where I gather the long cold seasons make any fat and warm delicacy a welcomed eat. 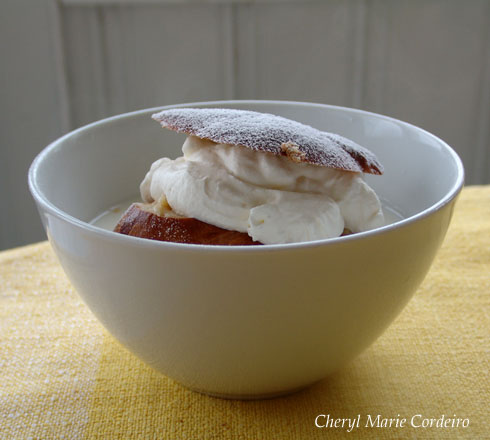 A northern Swedish tradition: a semla served in a bowl of warm milk.

I think if I somehow found myself away from Sweden in the future, the tradition of eating semlor on Fettisdagen is something I would like to bring with me. It’s a food that warms the belly when you eat it. It’s a comforting food that connects with the soul when the weather is at its coldest.

One thought on “Semla in a bowl of warm milk, a northern Swedish tradition”