Ten minutes in the life of a pear 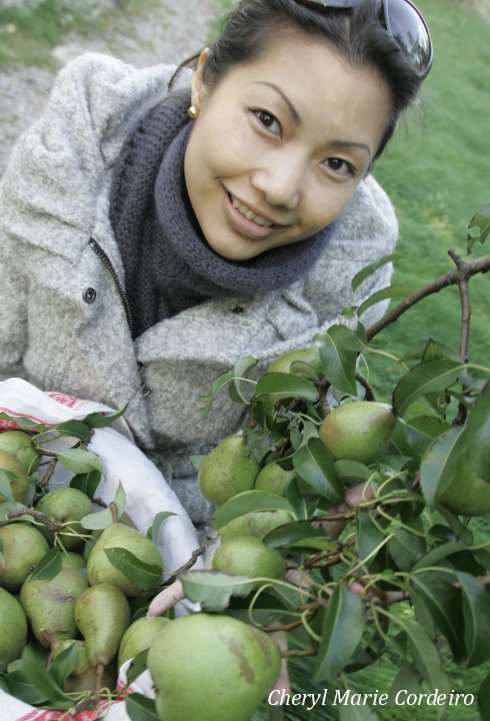 After work and back home, pear picking in the garden this autumn, 2011, where they sat happily bathing in the autumn rain just a few weeks ago.
Photos © JE Nilsson and CM Cordeiro 2011

Pears. They never featured prominently in my repertoire of non-tropical fruits when growing up in equatorial Singapore. In the markets they were often pushed aside, their presence at supermarkets and fruit baskets overwhelmed by the lush appearances of its more juicer alternatives such as sun ripened mangoes, mangosteens, chikus or creamy custard apples etc.

In Sweden the situation is different, the tone of voice among the fruits are calmer and everyone gets their say during the autumn harvests. While the apples this year were far from abundant, the plums and for the first time, the pears came along very nicely. While I have had my eyes directed towards finding someone having quince – kvitten in Swedish – in their garden and being at a loss about what to do with them (fat chance), our own pears were a more viable option for today’s harvesting. 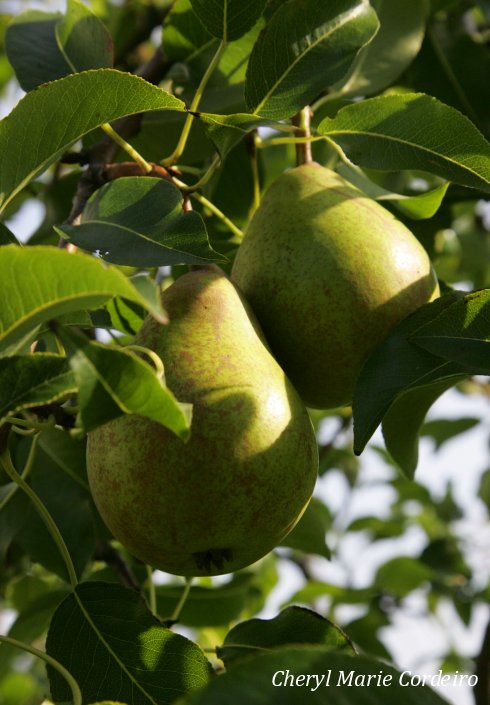 Ralph Waldo Emerson, obviously having a rather disenchanted view of pears in general, once said that there were only ten minutes in the life of a pear when it was perfect for eating. Maybe so, but they are OK for marmalade far longer than that. 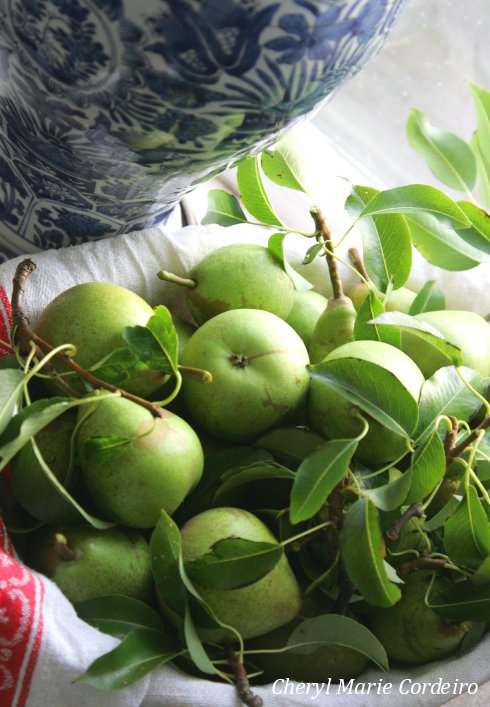 “…the duty of an apple [is] to be crisp and crunchable, but a pear should have such a texture as leads to silent consumption.”
~ Edward Bunyard, “The Anatomy of Dessert” (2006)

So these days, when confronted with a pear, I struggle to come to terms with its unfamiliar anatomy, hardly knowing what to do with one if not biting into it raw. And with a whole lot of them for the picking from our Swedish west coast garden – what’s to fill pots, pans and jars? Pear compote? Pear cobbler? Upside down pear cake? All immediately wonderful suggestions, but in my view, lacking appeal of some sort. I wanted more out of these pears, I wanted them to keep a little longer, to have their small but voluptuous presence on the side dish into the long winter nights, and perhaps even lingering after the winter solstice, welcoming the lengthening of days.

Pears are easy to make marmalade out of since their pectin content is good, however most is present in the peel and the core that eventually is discarded before cooking so the marmalade might not turn out as thick as you like. The recipe is easy enough though and is not much of an effort to do while the rewards are immense. 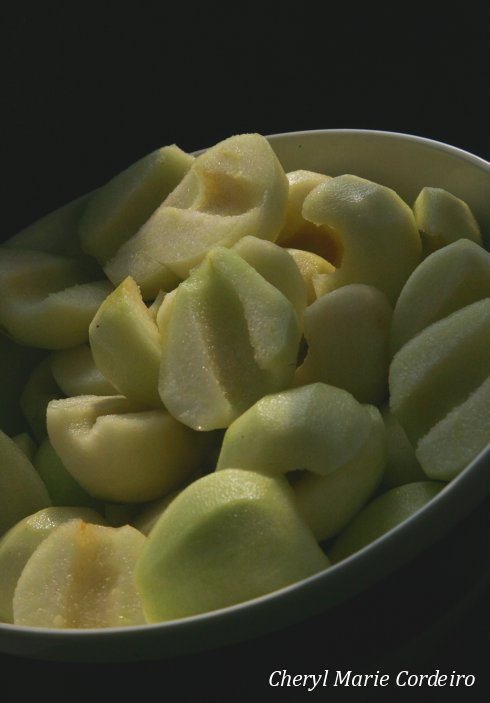 To make a pear marmalade that will go brilliant with soft French cheeses such as Brie and Camembert, just peel and dice your pears until you get about 1.5 kg. Boil under lid for 15 minutes with half a lemon, add 300 ml of sugar and any flavouring you like. I used 1 inch finely diced ginger root, and let boil without lid for another 10-15 more minutes. 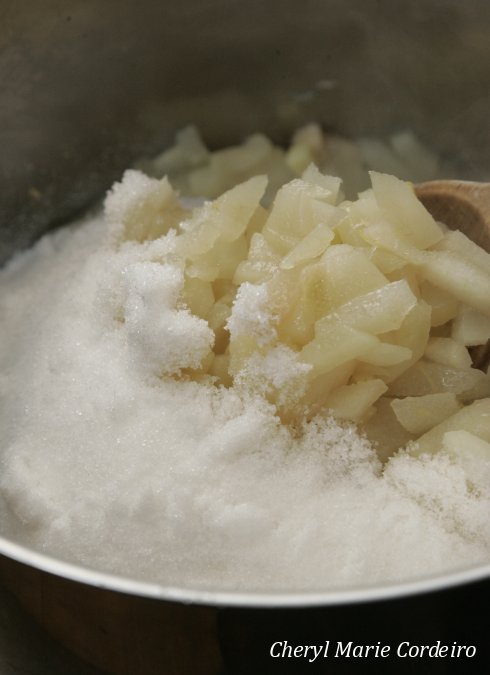 Castor sugar into the pear pot, the pears being diced into fairly small pieces. 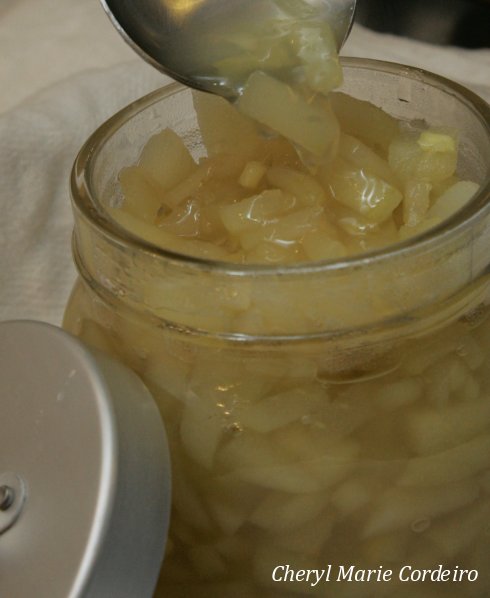 Cooking time should be about half an hour all in all.

The marmalade is ready when the total volume has gone down to about half, or around 800 ml. Thanks to the fruit juice and the sugar, the consistency of the marmalade should be fairly thick regardless of the pectin development, however to my experience the pear marmalade will thicken some over the next few days so no need to panic if you end up with pear something else, if it does not look like marmalade. Who’s to know what you actually intended to make, as Julia Child would have it. 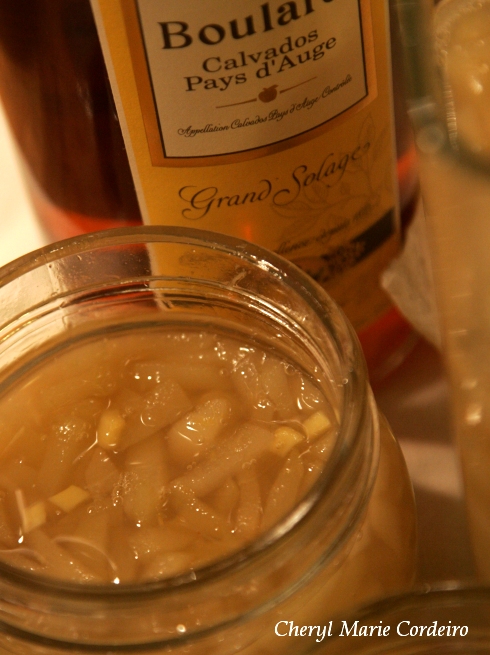 Admittedly when this turned out very well by itself, I could not stop myself from adding a fair dash of the apple liquor, Calvados, just for good measure. So far, noone has complained.

This thick, syrupy marmalade also goes perfect with unsweetened plain or natural yoghurt for a snack or a light lunch.

Having an abundance of pears we could not help trying our hands on a ginger and chili flavoured pear chutney too. For a savoury use of the pears, we added chopped red chillies to the ginger and pear in the pot, rendering a chutney that goes well with chicken and pork.

Making a new batch while following the above recipe I just added twice the amount of ginger or about 2 inches, and a finely shredded rather large red chili fruit. Being afraid it would become too hot, I discarded the seeds. Highly recommended together with chicken. 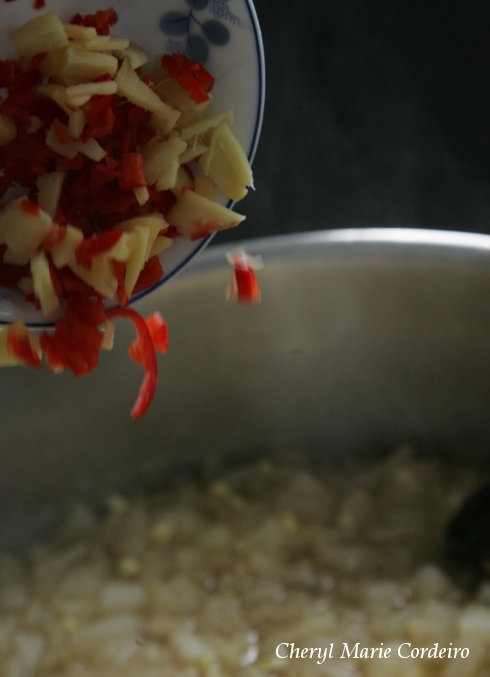 Ginger and chili into boiling pears. 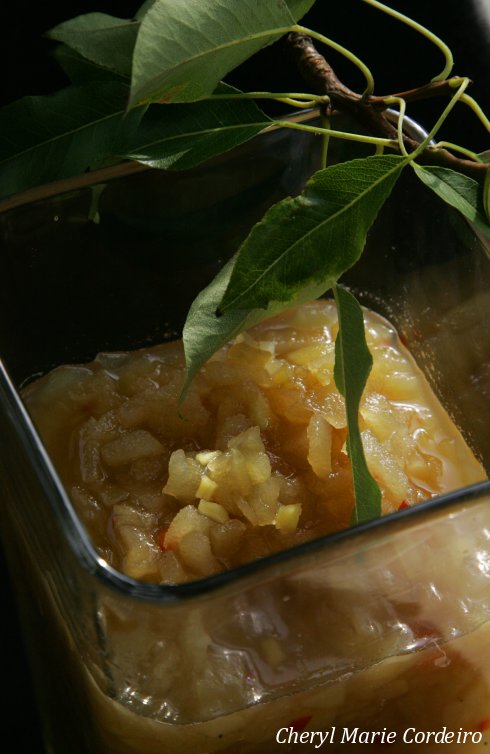 Complements chicken and pork, adding a sweet and spicy flavour to poultry and white meat.

Personally, between the sweet and the savoury, I’m now sitting snug and comfy with the knowledge that I will have this harvest for keeps, for warmth, for as long as the winter lasts.