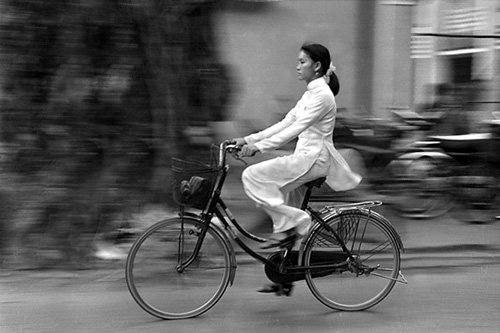 My first view of a Vietnamese Ao Dai (the national costume of Vietnam) was when I was still a student at the National University of Singapore (NUS). I believe one of the lady professors at the English Language & Literature department wore an ao dai to work. I watched her move and was mesmerized at how the material flowed around her wrists and ankles. I thought she was a vision of a goddess walking in the glinted shades of the tropical sunlight that filtered through the leaves at a most unromantic spot of the NUS parking lot for cars. 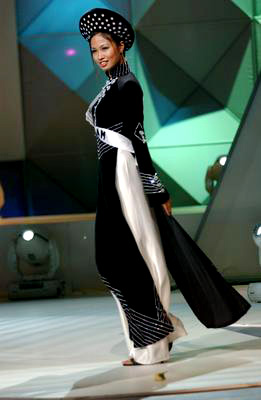 Above, a Vietnamese delegate to an international pageant, in her national costume of an ao dai, on stage. The design that she is wearing is one that is modern and most likely used in high fashion events such as a wedding or dinner or in this case, a national costume representation.

The picture gives some idea of the flowy movement of the feather weight material that is preferred when constructing the ao dai. Most ao dais are figure hugging on the upper body; the design then splits at the waist and drapes to the ankles.

It is the waist high side slits that lend this dress its coy but come hither appeal, since the side openings will allow a glimpse of the wearer’s midriff. The bottom part of the ao dai are wide trousers that sweep the ground as the wearer sashays down the street. The entire construction elongates the wearer’s form, lending an aura of elegance and sensuality even at its most innocent.

Considered a demure and elegant outfit, the ao dai which has actually gone out of fashion during the 1970s, has made a comeback in recent years and can be seen most anywhere in Vietnam, from the muddy rice fields and streets to school uniforms and official meetings. It is today, their form of dress.

Pronounced ‘ao yai’ in the south, but ‘ao zai’ in the north, the outfit is both indicative of social standing, status and age of the wearer. Younger girls and Vietnamese school uniforms tend to be white or barely there pastel colours as a symbol of purity for the young girls. 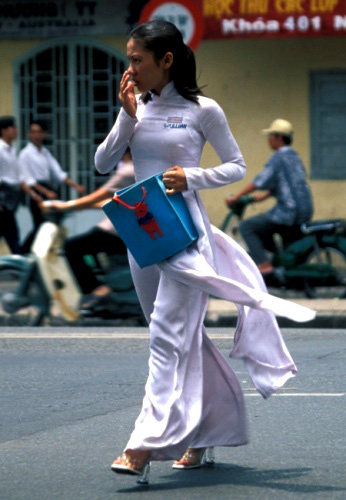 Young women who are unmarried also tend to wear pastel shades in their ao dai and older women would wear bolder colours, pairing black with white. A picture of a modern ao dai with a blue dragon motif. 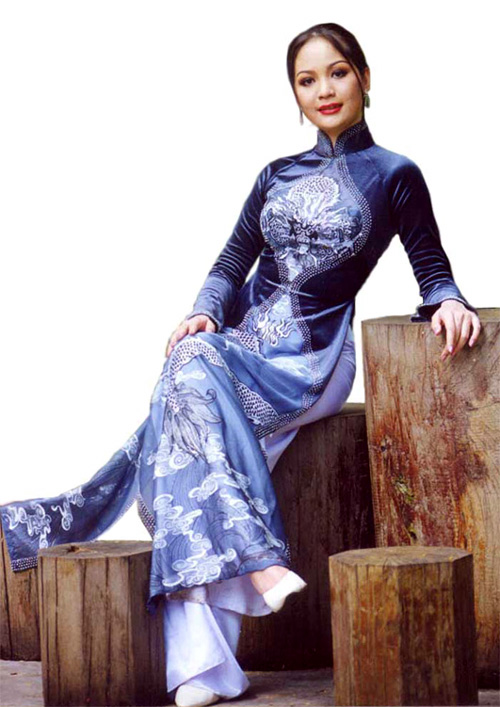 I have personally believed, until recently, that the ao dai was only meant for women, after all, I grew up seeing women in cheongsams, sarong kebayas and sarees and I can hardly picture those on men! So I was surprised to find that the Vietnamese long dress can in fact, be donned by men.

This picture shows some recognizable world leaders in the Vietnamese long dress. Here, they wear the long dress in silk. 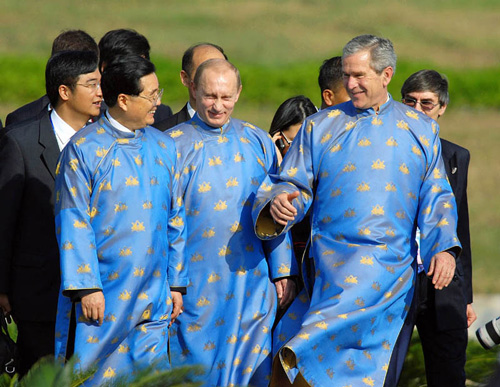 I wouldn’t say they looked all that sexy in those outfits – I would personally vote for a kilt anyday! But after a moment’s thought, perhaps it isn’t all that surprising since the style of dress hails back to the days of the Qing emperors in China and their elaborate gowns. And indeed, the ao dai was developed from Chinese court clothing with the first modern versions of the appearing during the 1930s.