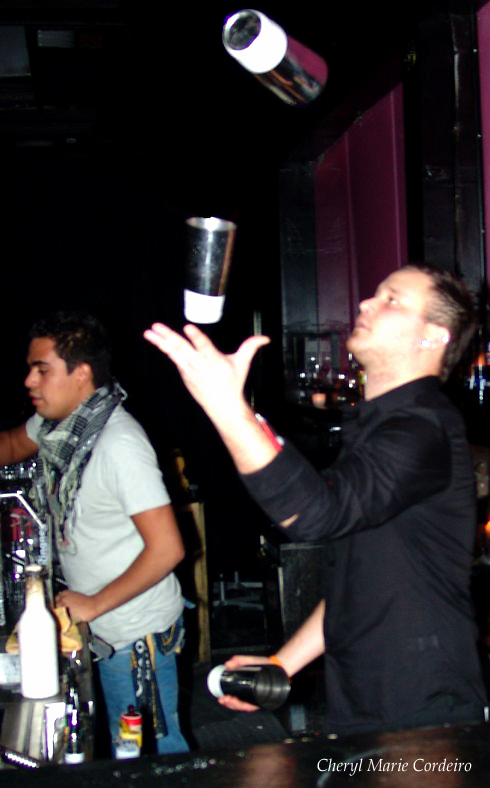 The bartenders were not about to be upstaged by the girls; they offered a brilliant show of their own bartender tricks, juggling bottles, glasses and blenders.
Photo JE Nilsson CM Cordeiro-Nilsson © 2009.

Around 10 pm the crowd started to pour in. The photography crews settled in and representatives from print newspapers as well as on-line journals started to appear and introduced themselves. The lights flashed and the sound checks punched holes in the ambience once in awhile. Girl friends, boyfriends, talent scouts and the hot and successful of the clubbing crowd milled around, settling in the VIP areas and the bought tables.

It wasn’t before long that the music was pumping to a vigorous dance beat and the DJ created new sound waves that got the crowd on their feat before the event began. Everything with the show was rehearsed and planned by now. The second stylist crew was on site and they were busy re-tangling any hair that the rehearsal could have untangled. 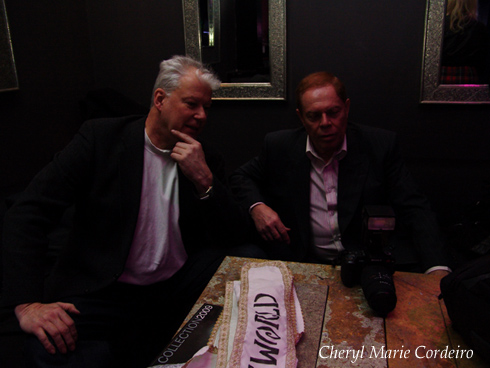 We were invited to some champagne in celebration to the event! And more champagne was poured soon after, with the glasses generously passed around to others in the ‘in’ crowd. The expectations and tensions electrified the atmosphere. 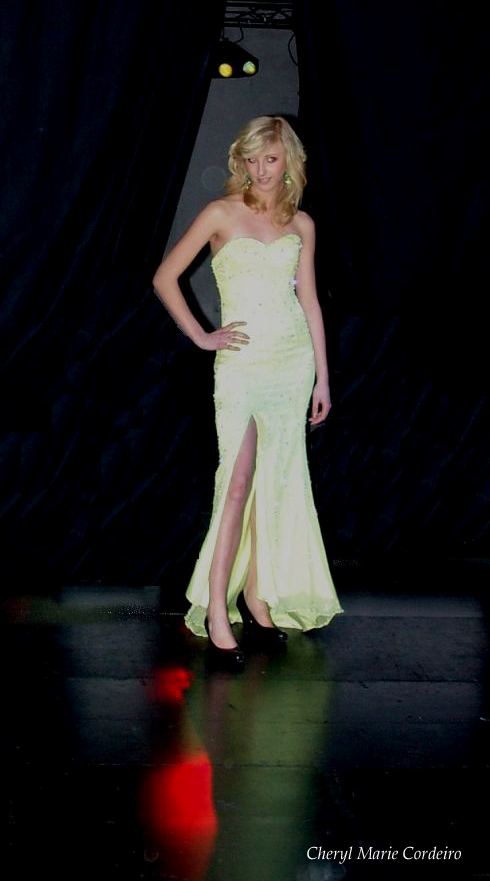 Our girls that were only there for the practice did very well.
Minna on stage in evening wear by Alfred Angelo in Oslo, Norway 2009.

The event began with the expected bang! with beautiful Lisa-Mari Moen Jünge, Miss Norway, World, 2007 as host for the evening. Being part of the judging panel, I was delighted to have one of the best seats in the ouse, right in front of the stage. And I thought the girls did fabulously well on stage!

Having been in the judging panel for several pageants in Singapore and in Sweden, I would like to share my insights about how a pageant jury works, since there are often many questions regarding how the winners are chosen. In my view, a large panel of judges, though more intimidating for the girls, would present a broader perspective on the girls in general since each person will look for slightly different qualities in the winner. Back at the Miss Singapore Universe 1999 pageant, I remember a 12-member judging panel in the closed round interview session and a further 7 new judges were called in for the final stage presentation event. This event in Oslo had about 6 judges in the judging panel, persons all related to the fashion and entertainment industry. 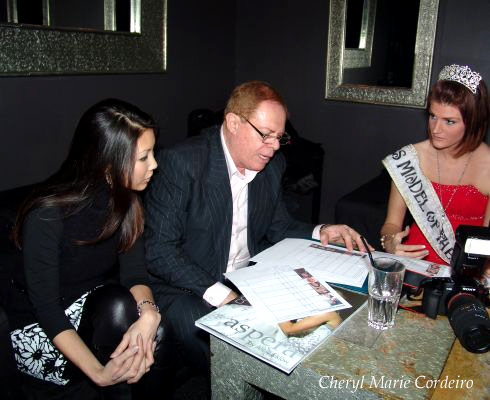 Myself, with Peter and Karine.

As mentioned in my previous post on pageants, different pageants in the world have different profiles that target different markets. Some pageants look for swimsuit models for sports magazines, some look for models for the fashion industry, some look for representative women of their age and times to help with humanitarian causes and environmental awareness etc.

Models, representative faces and personalities are needed everywhere and what we need to do as judges is to know which pageant best fits the girls we have. As such, the chosen delegate to the country will need to fit the pageant profile and preferably have an active interest in the pageant profile before winning, so they stand the best possible chance of bringing home a crown to the country organisation. 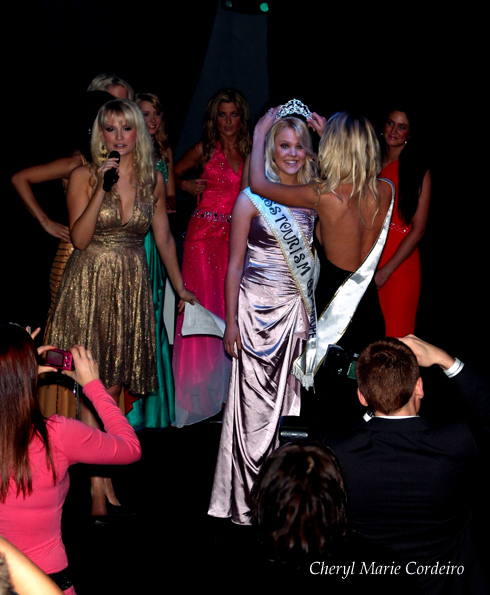 Apart from charisma, that certain x-factor on stage and off-stage, this girl will need to be full of positive energy. And how do we know that? Well, what is not told to most pageant contestants is that a lot of judging and selecting of the winning delegate actually take place during rehearsals, when the organizers actually get to meet the girls in person, when they first arrive on scene for training.

A very strong consideration is physical and psychological strength. For one thing, the fashion and entertainment industry is a very stressful environment to work in. There are prima donnas abound and hysterical outbreaks amidst events are the norm, and I am not talking about the models. Contrary in this mayhem, the winning delegate very often needs to be the calm boulder for everybody at the scene, from photographers to producers. She will need to be a pillar of strength, that people can go to and confide in, to get coffee and an aspirin to the producer or the photographer when something goes wrong for the umpteenth time. When the batteries are flat, when that particular lens is back at the hotel or the sun goes down behind the wrong mountain.

As such, the girl we look for as country representative needs to do this job effortlessly, without hurting herself. She needs to be mature for her age with feet well grounded. She will need to be able to pull off a genuine smile even at the end of a long and gruelling day of meeting people, fans, photographers, journalists etc. So this girl needs to be all this and of course, above average in looks for an eventual international win. All economy in pageants are related to sponsors and the entertainment and publicity value of the event, and nothing beats winning.

Pageant contestants who did not win should never take a non-win as a personal failure. In my view, the fact that these young women are on stage makes all of them winners in their own right! Since not everyone has the confidence or strength of character to put themselves on stage to be publicly judged by professionals in the field and by others in the viewing crowd. Many pageant winners also win out of sheer determination of will, after several tries at pageants. Crystle Stewart, Miss USA, 2008 for example, won the title after her fifth attempt. 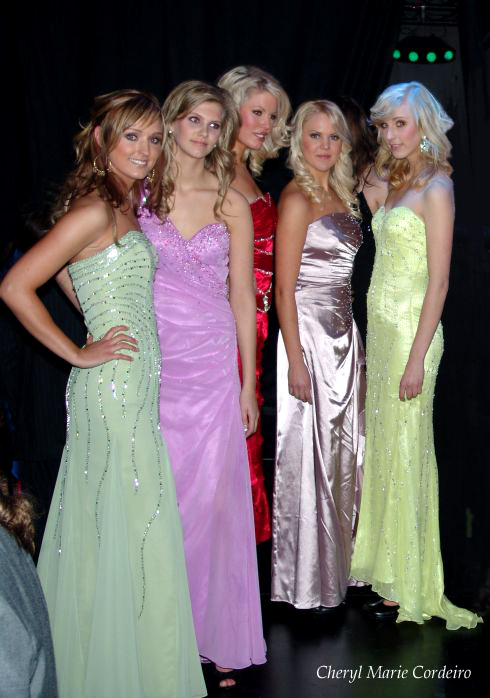 Girls gathering on stage after the event, for a press photoshoot.

The furore of the event does not end with the crowning of the girls, as the crowning signals the start of the press photography, interviews for the winners and the event’s after-party!

Final photoshoot by the pool and spa, and good-bye 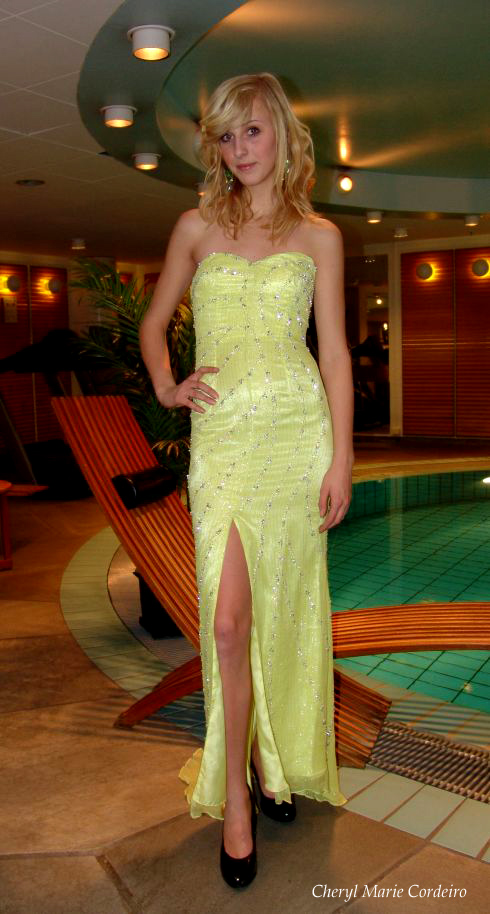 Picture of Minna during the final photoshoot by the pool and spa at the Clarion Hotel Royal Christiania.

The pace of the next day was rather less hurried, with everyone in good spirits. We headed for the hotel’s pool and spa arena for a final photoshoot for the girls and took our group shot for the road. 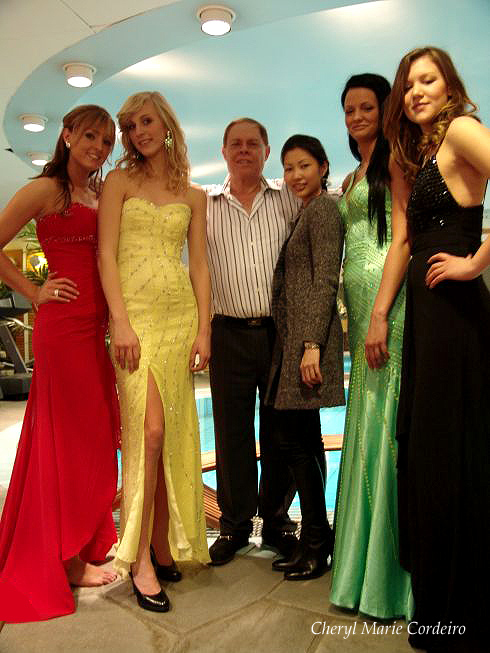 A farewell shot, a last pose in front of spotlights and cameras.

The fun was over for this time. From now on, some of us would go back home to continue with our studies and office work. Some would just switch clothes, grab their bags and travel out in the world towards their next photoshoot, next modelling job, next cover picture, meeting new and exciting people along the road, creating their own future as they go.

The Miss Sweden MMW and Miss Sweden MTQI will be held in Stockholm, Sweden, probably end of May 2009. Those interested in attending this event or participating as a contestant to this event, please contact Peter Hadward. A feature article by Henrikke Havaas and more pictures to the event can be found at BiipMag.

3 thoughts on “Beauty Pageants, a peek behind the scene
4 – Crowning and After-Party!”