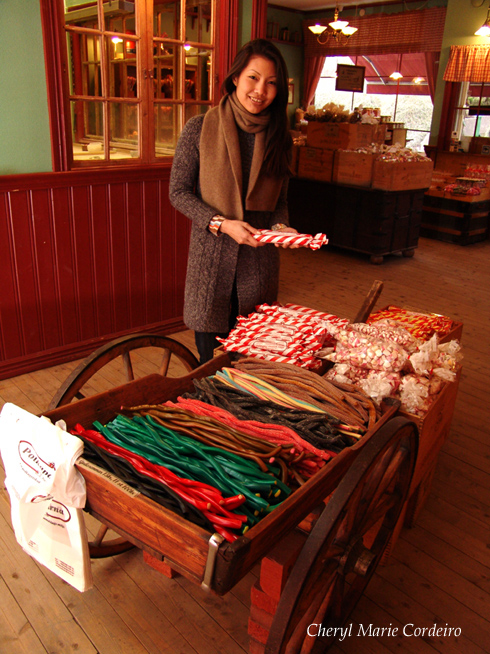 Isn’t visiting a candy factory something we have always dreamt about? Well, yesterday that dream came true for me!
All photos for CMC by: Jan-Erik Nilsson © 2009.

Although I need to admit that chocolate would have been my preferred choice of candy, the chance to visit a polkagris or striped candy cane factory in the small-town of Gränna is a dream come true!

Gränna with its adjacent island of Visingsö in Vättern, the second largest lake in Sweden, is a tourist paradise and located only a few hours of driving from either of the cities of Gothenburg or Stockholm. Its narrow cobbled streets and old fashioned houses reminds me of Arrow Town in New Zealand. 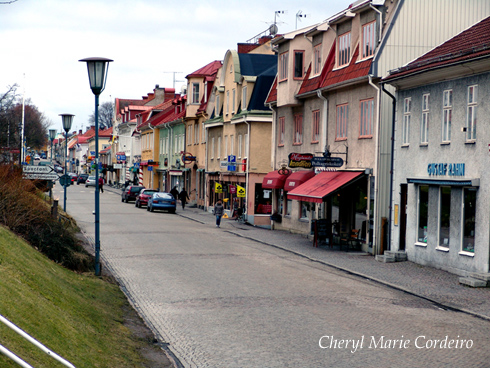 A street in Gränna, lined with polkagris factory shop fronts displaying their trade. This street was the R1 national highway until the 1970s. Today the new highway runs outside of the city, not too far off.

Through Gränna runs the former “R1” which was once the main road between the Swedish West and East coast, connecting the two major cities of Gothenburg and Stockholm. By the 1970s the new E4 highway was built outside of Gränna. Today, during the summer, this old main road becomes completely blocked with tourists.

Few people travelling between Gothenburg and Stockholm would today stop over at Gränna, if it weren’t for a sugar sweet invention in 1859. That year, Amalia Eriksson, in trying to keep her economy together as a widow, applied to the authorities for a permission to start making “fine bakery and a sugar candy called polkagris“. The name polka came from the popular new dance at that time.

Without this initiative Gränna would have been virtually forgotten and Sweden would have been without one of its most popular and characteristic national souvenirs, the red and white striped candy cane. It is available in a myriad of shapes and sizes, some approaching 500 grams (1 lb), which you can buy and eat yourself silly. 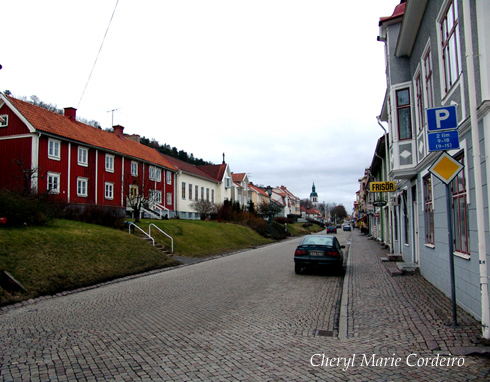 The main – and only – thoroughfare street in Gränna, once the main road between Gothenburg and Stockholm.

That the town of Gränna has become famous for its striped peppermint candy canes is ironic and a remarkably modest fate for a city that once was at the absolute center of Sweden. In 1652 it was literally founded by the Count Brahe d.y. He established himself here and built himself a stronghold, in a network of three castles. The ruins of one of the castles, Brahehus, intended for his first wife is still standing, all but spoilt after a devastating fire in 1708. He even kept a small private army at the nearby island of Visingö where he had his main castle and also established a private print shop, and despite the protests of the clergy, a private school.

He was an extraordinary man and soon advanced to second in command to the Swedish King Gustav II Adolph. Due to the peculiar Swedish habit of never bragging about old achievements, Gränna is today more famous for its candy than its history. Go figure. 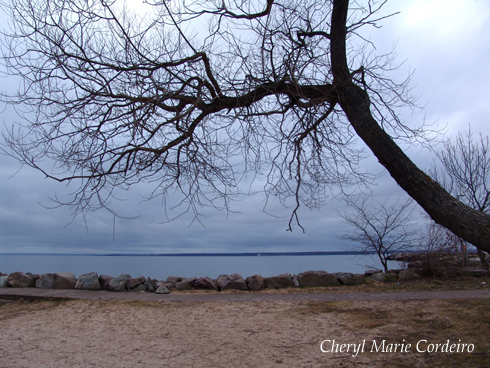 Lake Vättern shoreline, in the distance Visingsö and the ferry which is the only connection to solid land.

The island of Visingsö visible in the distance is worth a few notes. According to legend it was once thrown out as a tuft to serve as a stepping-stone for the Giant Vist’s wife, so that she could walk across the lake without wetting her feet.

As a large island on a vast inland lake, it was considered very safe. It is known to have been inhabited since the stone age. During the 12th century it housed the capital of Viking time Sweden, called Näs, and as such was mentioned in the Island Sagas of the time as the place where the Vikings hoarded their treasures.

After having lost much of its former glory, the island was chosen in 1831 by the Swedish Navy as a good place to grow straight and tall oak trees that were felt to be much needed in the future for the building and upkeep of the Swedish fleet. It was soon decided that 360 hectares of land – or 3.6 million square meters – should be planted with tens of thousands of oaks. The planting took 20 years after which the project was promptly forgotten. 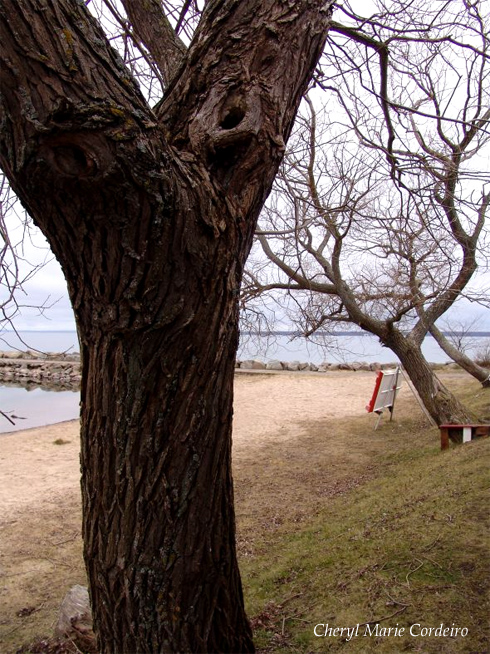 A modestly old oak, maybe a mere 150 years, near Gränna at the Vättern lake, with Visingsö in the background.

However, since oak trees grow extremely slowly, it was not till 1975 that the local keeper who had inherited the job of looking after the trees, picked up the phone and called the Swedish Navy to say:

Since the Navy eventually had no use for them, the oak plantation is now preserved as a national park. Some trees are occasionally harvested for historical ship building projects and whisky barrels, for which the long and straight trees are perfectly suited. 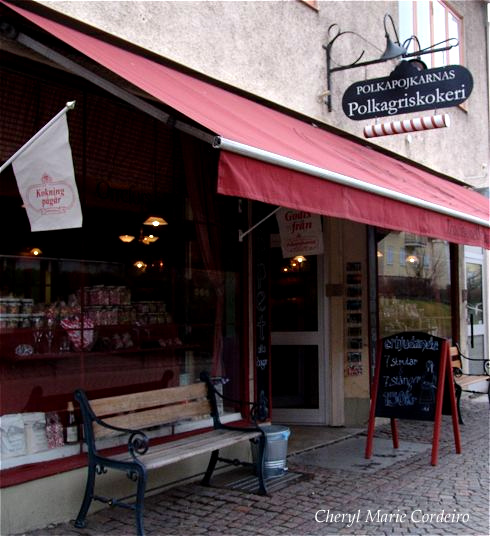 The very friendly shopfront to the Polkapojkarna Polkagriskokeri in Gränna, Sweden.

As we walked through this town, we noted that the making of the classic red and white striped polkagris is shown in many small workshops that specialize in this most popular candy. Oscar and Gustav Lager, two young men working in Polkapojkarnas Polkagriskokeri, which was one of these shops, told us that summer time was the peak season for these workshops.

There were three persons in the polkagris workshop when we visited and they were very kind to let us take some pictures as we watched them manufacture these delicious and striking looking candy!

Gustav and Oscar, brothers who worked in the kitchen, began making this by mixing sugar, water and some vinegar, heated up to around 150 centigrades. This is in order to get a clear dough of melted sugar which is then poured out on a baking table. A small part of the molten sugar is colored red. The remaining dough is flavoured with peppermint oil. 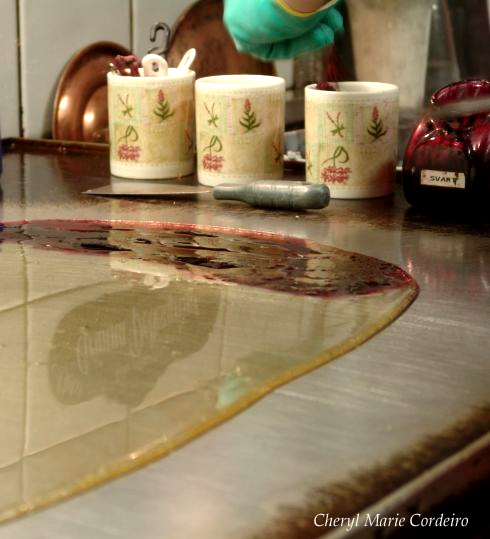 The clear dough of melted sugar, with a section of it coloured a deep red.

The red section of the melted sugar dough is then cut away, kneaded and set aside to cool. While the red dough is cooling off, the clear dough is pulled and kneaded to become filled with air bubbles. In this process it turns white. The one modernization with the making of the polkagris today is a machine that helps with the heavy work of pulling the dough. 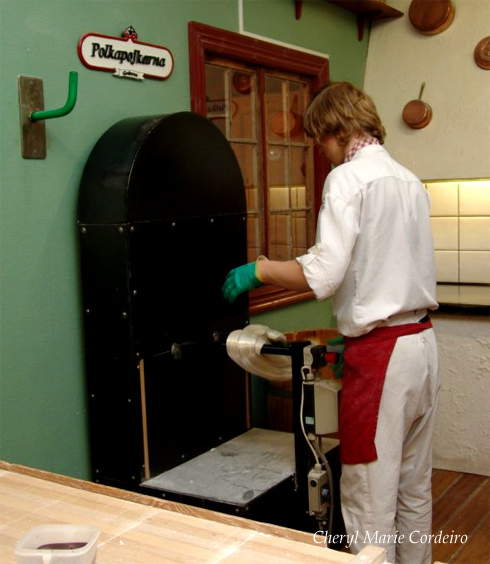 Gustav Lager adds the warm and sticky sugar dough to the pulling machine, to let it the dough stretch and fill with air bubbles, which gives it its white color and its unique consistency. This is the one instance when this factory has given in to some modernizations of the process since the 1850s.

As I watched the team at work in the kitchen, kneading and pulling the dough, I couldn’t help but imagine Amalia Eriksson back in the mid-1800s, having to work the melted sugar with her hands and that she would have been quite a physically fit lady from all the hard work that would have gone into the traditional process of making this candy! 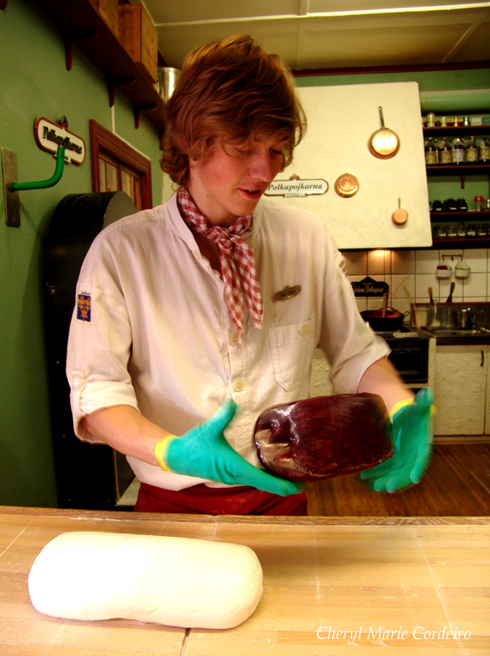 The red and white sugar dough, shaped like large bread buns, are now ready to be put together to make a polkagris.

When the pulling of he dough is done the dough is shaped into a bun, the red part is put on top of it as a red strip. The process then is to continue to pull and twist the sugared dough of two colours, until the polkagris have got their right intertwining pattern and size. 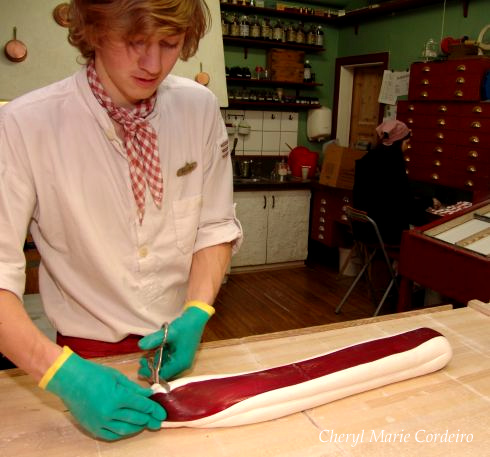 The red part is put on top of the white sugar dough bun as a red strip. 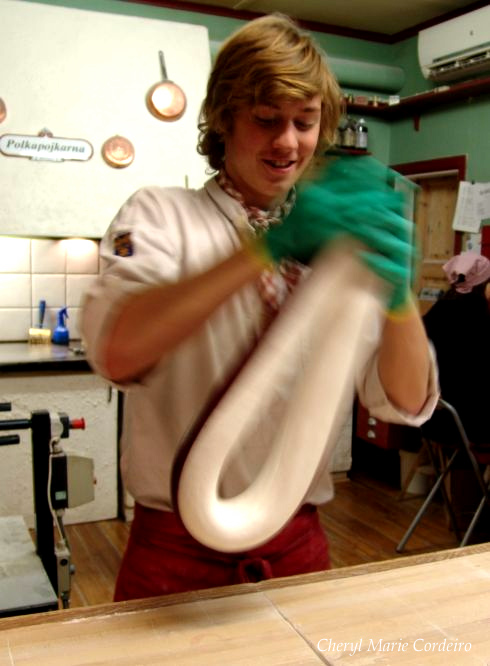 The sugared dough is continually twisted and flipped, to get the right intertwined red and white pattern on it. 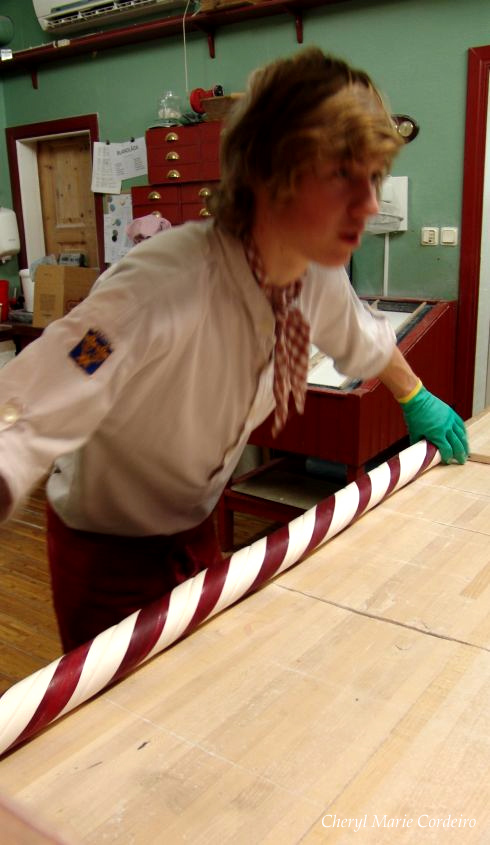 The sugar dough lengthens and begins to take its form after several minutes of rolling.

When the polkagris dough becomes long enough or when it reaches its desired thickness, it can be cut and shaped. The process needs to be quite carefully timed by experience since each moment is only possible at exactly the right temperature. Once the dough becomes cold it solidifies into a brittle brick that is no longer malleable. 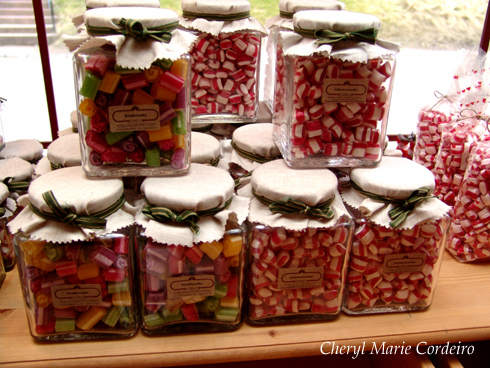 Polkagris also come squared and bottled. This candy is often seen during Christmas at the Christmas desserts table, to make the festive buffet line-up more colourful!

Being in a candy store and witnessing the making of a polkagris is truly fantastic! It also makes you want to buy plenty of what is in the store and as expected, we walked away with a few bags of candy, mostly peppermint flavoured, though in our bag was also modern liquorice, mint-filled chocolate and fruit flavoured candy.

But as the tourist organization is careful to point out, only the red and white striped ones are truly Gränna original. 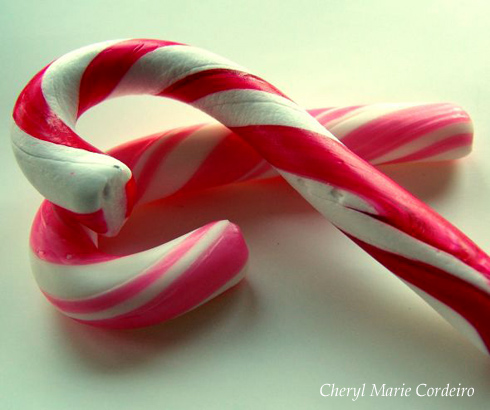 Some “original” candy canes we brought back from Gränna, Sweden.