A magical evening with Ulf Wagner at Sjömagasinet, in Gothenburg 2011

Restaurant decoration at Sjömagasinet. In Swedish folklore well managed farm houses was looked after by their own house elf or elves. They were quiet and mostly invisible but kept themselves informed from the animals if everything was done right and proper. The house cat was their eyes and ears during daytime. If the people were good, the elves would help take care of the house and the family that lived there. Eventually these elves merged in Swedish lore with the later idea of a Juletide Tomte that brings the Christmas gifts.
Text and Photo © CM Cordeiro, JE Nilsson and T Eliasson, 2011

In the past years, we’ve dined enough at Sjömagasinet in Gothenburg (2009a, 2009b, 2008, 2007) to feel quite at home at what was once the old outfitting warehouse for the Swedish East India Company (1731-1813). In the 18th century their ships made round trips from Gothenburg to China and back where each trade voyage took about two years, bringing back immense fortunes for the participants.

During their many voyages these ships would dock at various ports around the world including Cadiz in Spain, to pick up silver and Batavia in Indonesia for spices, before reaching Canton in China. Besides tea, silk and spices they contributed significantly to the cultural exchange of knowledge between Sweden and Asia and brought back many important influences, not the least within the medical and culinary field that is so intriguingly interconnected. In this wharf equipment were stored such as sails, masts, spars and all things you might imagine being needed on a wooden ship about 50 meters long. The spirit of these adventures is still felt in the very walls of this building. 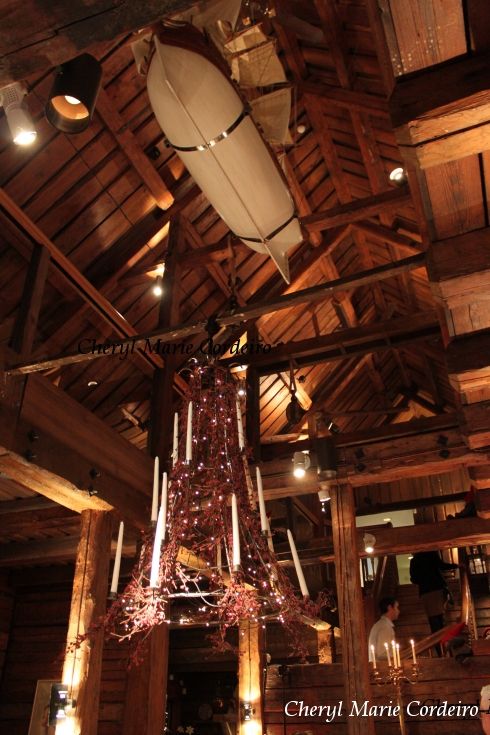 This outfitting wharf is today a cozy restaurant by the sea, complete with intersecting logs for walls and ceiling, equipped with a most modern kitchen and with a two floors seating capacity of 300 guests.

While Ulf Wagner brought the first Guide Michelin star to a Gothenburg restaurant in 1989, when he ran a restaurant called The Place, Gustav Trägårdh won the Chef of the Year 2010 award for his efforts with the Restaurant Basement for several years, together with Ulf Wagner.

Stepping into Sjömagasinet being greeted by Ulf, his friendly staff, some Jultomtar at the farther end of the corridor and most of all, by the white stoned fireplace with logs on the fire all signaled immediately that the place was certainly up and about, and with him and his team in full control of the evening’s event.

The fireplace in the entrance greets all guests to the Sjömagasinet restaurant.

A winter’s evening without logs on fire at the restaurant would be the exception.

Traditionally dining at a classic Christmas table should be worked in five consecutive rounds, from cold herrings to warm dishes and after that desserts. However the beauty of a buffet, is that you can also skip all these rules and go directly to your favourites.

To me, the allure of the generous spread of cold to warm dishes didn’t do much to divert my attention from what to me, is the heart of any dining experience – the desserts! What caught my attention in particular was their chocolates and here a chocolate mousse and raspberry crème ensemble.

My buffet tables begin as always… with desserts!

The evening was spent in good company, with conversations at the table on the inspirations of various dishes and how the various Swedish culinary traditions from north to south had influenced the traditional Swedish julbord offerings.

Dining with culinary experts is always amusing. One at the table groused over what I thought was a perfectly delectable sweet mustard sauce, and then went on to dine in complete discontent because the ‘wrong’ mustard seeds had been used, while one other bemoaning the fact that the “gourmet” Anya potatoes were served on the side with the Lutfisk instead of a more traditional one.

Skagen prawn salad – a dish that on any other day, would go well between a French baguette for lunches in Sweden.

The restaurant has an impressive collection of wines, being one of Ulf’s foremost passions.

JE with Ulf at his own buffet line up.

The perfect complement to coffee.

Jellied candy, all made by Ulf’s team in the kitchen at Sömagasinet.

Valrhona bars with cocoa beans from Trinidad, Venezuela and Madagascar.

After much discussion of processes behind the dishes, from raw produce to presentation at the table, the evening concluded with some final suggestions at the table on possible improvements in various recipes and presentations to the buffet, and of course, the ripple effect of bringing back new ideas to experiment with, right in the kitchen at home.

Walking home in the velvety black night with the street lights of the newly developed Eriksbergs quay reflecting in the still, black river water, a traditional Swedish Christmas poem came to mind as unusually fitting with the mood.

The opening paragraph of the poem Tomten by one of Sweden’s most renowned writers of the late 1800s, Viktor Rydberg. Published first time in Ny Illustrerad Tidning in 1881 and nowadays a classic that just about everyone in Sweden would recognize as an indispensable part of the Christmas.

Pretty much same as the Julbord at Sjömagasinet.