A lifetime of romance in its old cut facets 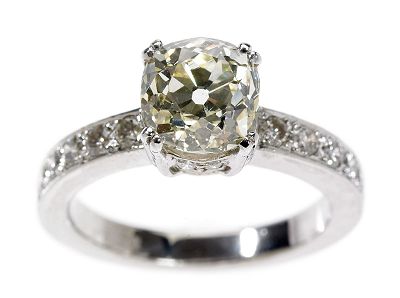 An old cut diamond weighing ca. 1.90 ct, Top Cape, VS set in white gold with 18 modern brilliant cut diamonds set halfway down each side of the shank.
Text and Photo © JE Nilsson and CM Cordeiro 2012

I love old cut diamonds. There’s a depth of warmth about them that comes through even in dimly lit rooms compared to their flashier modern counterparts. It’s the way the cutting interacts with the light. A softer, calmer sparkle and glow rather than the hard busy flashes of the modern cuts.

Distinctive of old cut diamonds are the larger culet as you can see in the picture, where modern brilliants will have a very small or no culet at all. Most of them are also cut cushion shaped and not perfectly round, as they were not computer assisted cuts but rather, fashioned from the cutter’s understanding of the nature and shape of the stone. Original cutters of diamonds and jewels needed to a large extent have the eye of an artist who envisioned the polished stone in its finished state in all its dazzling glory. A skill that perhaps not many cutters of today possess since computers and mathematical formulae now distinguish the ideal cuts for a rough, rending stones that while may be full of sparkle, lacks in my view, a certain individual spirit and personality.

If you own an old cut stone, chances are, you will recognize it in any light as your own just by looking at it – the colour, the cutting, even by its inclusions. Luxury comes these days not in terms of how much you spend but also in terms of exclusivity that includes peculiarities and imperfections that in old cut diamonds, make them striking to behold. And diamonds with natural inclusions that mark them, giving them their own ID instead of a laser printed number are certainly unique by nature. So if you have an old cut diamond for example, a family heirloom of sorts, and have it resent into a new design, chances are even without loop in hand you won’t be fooled by any replacements, you’ll know it’s yours by eye.

Old cut diamonds also tend not to be as white as the modern brilliants, most of them having I, J, K, L colours or Top Cape, Cape colours. A feature that I have today, come to love.

This old cut diamond, acquired from Sotheby’s in Paris, has decades of narratives to tell, embodying romances across several lifetimes, reflected in its open cut and open flanked face.

All you need to do is pick it up,and read it.