Rediscovering oatmeal or havregrynsgröt in Sweden 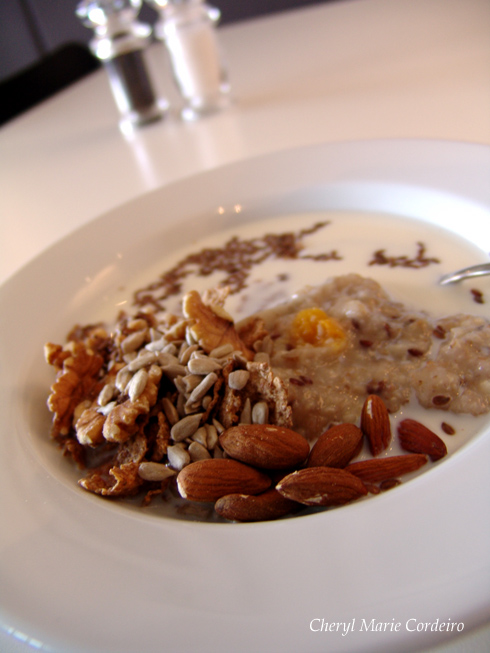 As a child, I was never a fan of oatmeal because I was fed oatmeal served with sweetened condensed milk only when I was ill. Tasteless and watery, the consistency of the oatmeal served meant that it could be swallowed and digested more easily. Back then, because of my lacklustre association to oatmeal, I remember staring at a friend in horror when he told that his father ate plain cooked oatmeal everyday for breakfast, without added sugar. I asked him in all earnestness, “Why does your father do that?”

After more than fifteen years of not touching oatmeal and after a shift in continents, I began rediscovering this simple grain that in no matter what form you have it, takes less than ten minutes to cook.

A popular breakfast in Sweden, oatmeal in its most basic form is often cooked with a pinch of salt and served with apple sauce, milk and a dash of cinnamon powder on top. From this, I began experimenting with fruit, slicing bananas into the mixture or adding dried raisins to the mixture, taking away the apple sauce but keeping the dash of cinnamon. I’ve also tried frozen fruit such as frozen strawberries, raspberries, blueberries and mangoes. Fruit in general seems to go splendidly with oatmeal!

Beyond fruits, I began eating oatmeal with all kinds of nuts – hazelnuts, almonds, walnuts and brazil nuts. Or seeds such as flax seeds, sesame seeds, sunflower seeds. These also seem to complement oatmeal to a large extent and I began to enjoy having oatmeal at breakfast.

Today, with a repertoire of oatmeal recipes at hand, I find oatmeal to be one of the most cost efficient, healthy and interesting meals one could whip together in no time. Everyone from atheletes to those with high blood pressure and diabetes would benefit from eating at least one serving of oatmeal a day.

As for my association of oatmeal and illlnesses, it’s pretty much gone now. In fact, I’m just as happy settling for oatmeal with sweetened condensed milk as I am with oatmeal with fruits and nuts. The latter, preferably without added sugar.