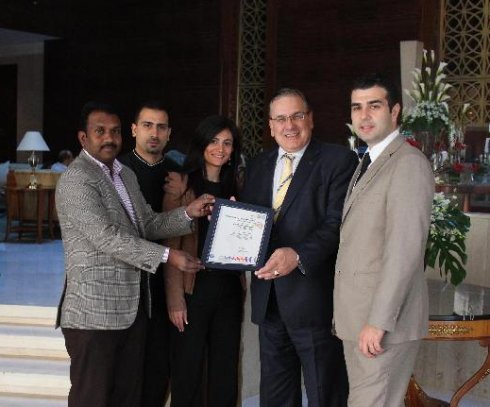 Giorgio Lanfranchi has had more than thirty years of international experience in the Tourism and Hospitality Industry. Born in Italy, his career had taken him across 5 continents working at international 5-star destination companies such as the InterContinental Hotels Group, Kempinski and Four Seasons, that had operations in countries from Switzerland, United Kingdom, Oman, Philippines, India, Egypt and Eritrea. He has been General Manager of the Millennium Hotel Doha since 2008. Millennium Hotel Doha is part of Millennium & Copthorne Hotels, one of the world’s largest hotel companies with more than 120 owned and managed hotels across 20 countries. In 2006, he was Knighted for his social and economic commitment in the Tourism Industry by the Italian President Giorgio Napolitano with the honour – Cavaliere della Repubblica Italiana.

Sitting back with coffee in hand, staring out through large glass windows that offer a perfect view of a clear blue sky over an amazing skyline, it is surreal to be in conversation with Giorgio Lanfranchi, General Manager of the Millennium Hotel Doha who sits in the heart of Qatar.

As GM of the luxurious Millennium Doha, Giorgio oversees most every aspect and detail of its daily operations, though perhaps one could say that being Italian and having his family background in food and beverage, it is there that his heart is well placed.

With more than about three hundred staff, and even more so guests walking into the Millennium Doha each month, I asked how it is that he was able to ensure the experience of luxury and exclusivity of each guest to the hotel?

I had expected an answer in the line of quality assurance in the F&B department, to strict guidelines, rules and routines in the frontline. But instead, he replied, “Take care of your employees and they will take care of the guests.”

And indeed. In a stretch of the average eight to ten hours on the job, Giorgio manages to touch base with his staff at various departments and divisions across the hotel functions as many as eight times. Reasons vary from keeping schedules, to following up on contracts, projects and new leads to keeping up the morale of the employees. He also finds time for socializing on social media, as a way of keeping a flow of network opportunities.

On the topic of “Quality Service” in the hospitality industry, we went right back into the focus on human relations and group working dynamics where he said,

While it takes a team effort to efficiently meet guest expectations, it generally takes an individual’s effort to exceed expectations. And when an employee exceeds a guest’s expectations by delivering service faster, going out of the way to handle a special situation or quickly compensating for an error, he or she enhances a service beyond what the guest had anticipated.

And it is this very aspect of the ‘personal touch’ that he actively encourages and cultivates in the organizational culture of the Millennium Doha. This he does by being politely firm but at the same time friendly and accessible to all members of his staff.

In terms of what makes for great customer service, Giorgio Lanfranchi’s ideas parallel those of Jan Carlzon. Carlzon is the Swede most noted for being the CEO of the Scandinavian Airlines System (SAS) Group from 1981 to 1994 and largely responsible for the flattening of hierarchies in Scandinavian organizations with the book, “Riv pyramiderna” (1985). Giorgio seldom dismisses any form of feedback from most anyone in the organization, deeming that it is those at the frontline who come most in contact with the guests and they would know best for current situations. Such feedback is also one way towards Innovation in the hospitality industry where he says,

Every level of staff should be allowed to express his / her ideas on how to improve the operation without fear of reproach.

With the people philosophy firmly in place, proper organization strategy and goals that complement good HR policies don’t hurt either.

As I marveled at the restaurants situated in the Millennium Doha with all day fine dining in the ever elegant Cosmos Restaurant and Lebanese cuisine with a breathtaking view of the city at the top of the Millennium Doha in Zaman Restaurant and coffee and cake at the Atrium Café, where you could say that it is the restaurants and cafés of any hotel are really the vital center and repository of sensibilities of the establishment, Giorgio shared with me a milestone of success on his part, together with his F&B team of the hotel – they had in early February received international recognition for achieving the highest standards of food safety and quality management, the HACCP certificate from Codex Alimentarius. This came almost at the same time that the hotel brought in a famous Italian Chef, Manolo Marconi to be part of their ten day Italian Food Festival, an event opened by Giorgio in his capacity as GM of the hotel, together with the Deputy Head of the Italian Embassy Silvia Josi in Qatar.

As the conversation drifted onwards to life and business in the Middle East, where Giorgio will be part of a panel of speakers for the upcoming Hotelier GM Debate in April 2012 held in Qatar, on the topic of Qatar’s hotel industry landscape, present and future, I couldn’t help but look forward to further insights into the luxury of travel and living – where at the heart of everything, it really comes home to people and their warmth of giving to others that makes a difference, whether in F&B or at the frontline of the hospitality industry.