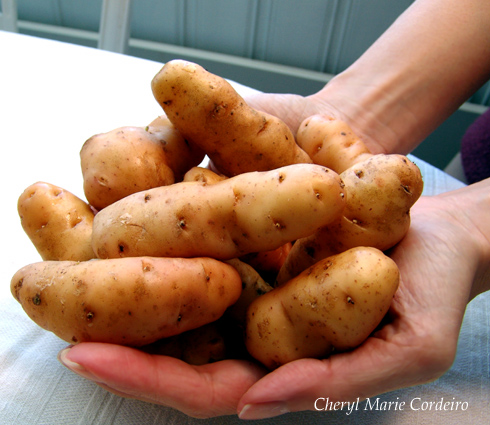 A handful of Anya potatoes.
Photo for CMC by: Jan-Erik Nilsson © 2009.

We were first introduced to these distinctly thumb-shaped potatoes at a recent food fair in Gothenburg, Passion för mat, where author and potato expert Dan Berntsson was on location to give en empassioned talk about these Anya potatoes, which he calls “GI-potatoes”. These potatoes grow finer than the normal household variety and the firmness of their flesh helps with the GI-Index in our bodies after a meal.

A project of the Scottish Research Institute and Lord Sainsbury’s gardener, Anya potatoes were originally grown in Scotland in 1995 as a cross between the Pink Fur Apple and Desiree potatoes. It gets its characteristic knobbly features from one of its parent, the Pink Fur Apple.

While one could buy 10 kg boxes of Anya potatoes readily availble at the grocers in the UK, this variety of potatoes has only recently been introduced into the Swedish market by Dan Berntsson, and is currently only sold to restaurants. We were lucky enough to get our hands on a 1 kg pack of these potatoes only because we were at the food fair in Gothenburg, that opened up a wonderful gamut of delicatesse food items for us to explore and bring home.

It is the Anya’s steadfast consistency that has seduced the food and restaurant industry in Sweden, because the potatoes don’t easily fall apart during the cooking process. These potatoes can also be enjoyed raw. When raw, it tastes much like a water chestnut with a nutty flavour. And when cooked, this nutty flavour, which is different from the taste of almond potatoes, is enhanced. 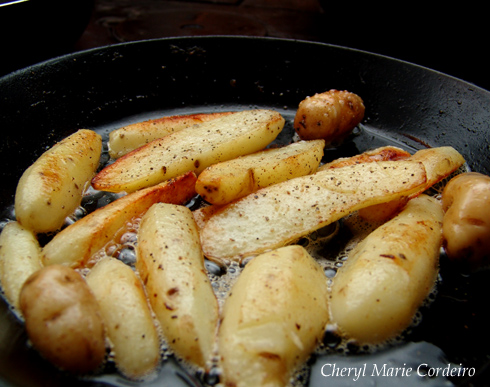 As the potatoes are rather small and tubular in shape, the best way to prepare them is by simply washing them clean and slicing them length-wise in half. Fry them in a mixture of butter and oil, with a dash of salt and peppar and voila!, they’re done in about fifteen minutes. A variation is to add parsley and garlic to the potatoes when frying. 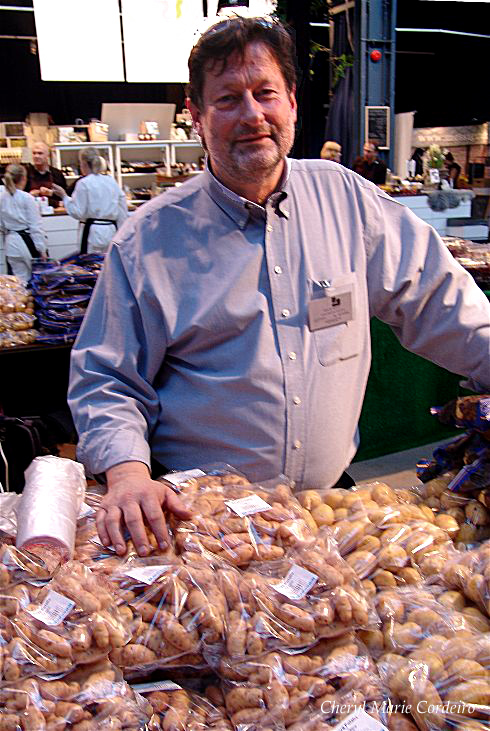 We met and spoke with Dan Berntsson, at Passion för mat 2009 in Gothenburg, who told that Anya potatoes were one of his favourites.

I’m hoping that Dan’s promotional efforts in Sweden with the Anya potatoes will help bring them to the local grocers soon, as these are tiny little things that will win almost anyone’s heart on the plate, including non-potato fans.