I recently had a chat with a guy friend of mine and he raised the topic of men’s suits. Apparently in the Singapore fashion scene, three buttoned suits for men are out and what is fashionable these days are the two buttoned suit. What he really wanted to know was – is this true?

I wondered some about that and decided to prowl the men’s Spring 2008 collections to see what were the upcoming styles. Below, is a presentation of styles from five different collections spanning Europe and New York.

Burberry Prorsum seemed to alternate between the three button (worn open) to two button suits (worn as one button). 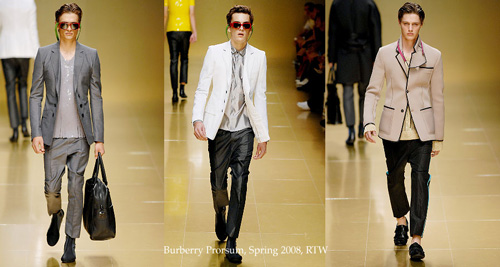 Alessandro Dell’aqua featured two button suits but wore them as one button. The third picture below to the right, features a one button suit. 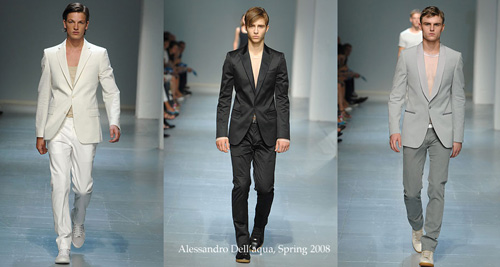 I generally liked the beat of Dsquared for Spring 2008, it opened with a biker look. Sporty, full of attitude and rugged. They featured all three kinds of suits, from three button to open. 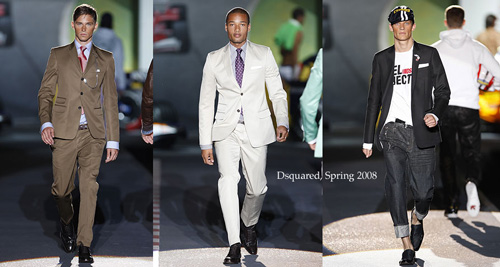 Thom Browne, a New York highlight had quite a it of range in this collection, featuring all three kinds of suits, from three button to open, the last pendulating towards the downright unconventional and fun! 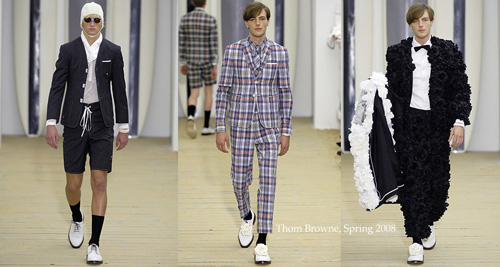 And Paul Smith, whom I love for his British eccentric, seemed to have his take on the five button suit, worn as one, two or three buttoned. 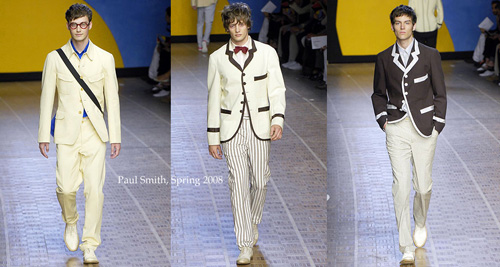 Men.Style.com presented some of the best suits in the world, made to order.

A sweep over the details show that style varies and there isn’t exactly a square box that dictates any kind of suit over the other. As a woman, I look at overall details when meeting with a man, from how he wears his hair to how he keeps his shoes. More than a suit, what makes most impact on me is how comfortable he is in his suit.

So, have no cash for a world class tailored suit? Then go with your confidence and walk into the room with style! I think the girls will want to hang around anyway.