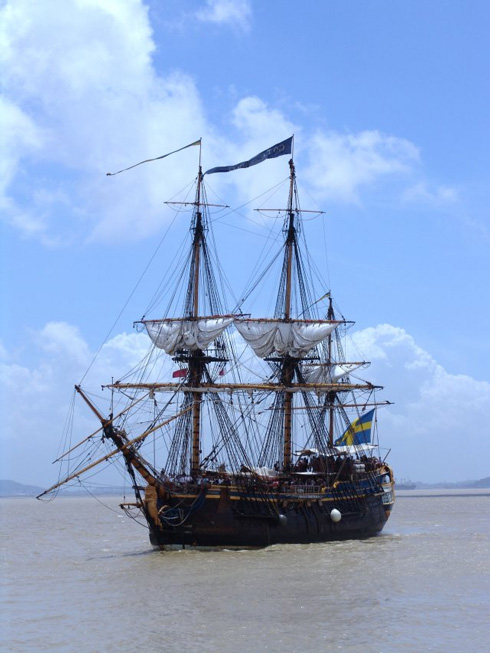 The rebuilt replica of the first East Indiaman Gotheborg, the Gotheborg III has now made its old trade route trip around the world, from Sweden, around the Cape of Good Hope in South Africa and up to Canton, China. On its way back from China, it touched base at Singapore earlier this year, where some of you might already have had a chance to view Her in Her majestic beauty. To me, she looks every bit belonging to the movie Pirates of the Caribbean where I can almost see Captain Jack Sparrow at the helm, albeit in the wrong flag colours.

The project was based on the excavation of the original East Indiaman Gotheborg which sat sail in early 1743 not to be heard of again before September 1745 when upon homecoming, She, with a huge crash, hit an underwater rock just outside the home harbour of Gothenburg and sank. The salvaging of the immensely valuable cargo of silk, tea and about 300,000 pieces of Chinese porcelain started immediately. This salvaging of lost treasures continued intermittently for centuries, since her foundering.

The entire project of recreating an 18th century Swedish East Indiaman ship and sending Her to China again and back, all started as a private project lead by Anders Wästfeldt, Berit Wästfeldt (his wife) and soon to join in, Jan-Erik Nilsson and a number of other specialists in business organisation, carpentry, blacksmith, sailmaking, shipyard organisation etc. Most of them volunteering and working for free.

While some of you had seen this ship when she arrived, in Singapore or any other port of call along the way, I’d like to share with you some “front row seats” to her moment of arrival in Canton (Guangzhou), China where I had the honour and pleasure of touring with the Götheborg III project Initiators and a group of the very first sponsors.

On the 18th of July 2006, the Götheborg III, sailed into the Boca Tigris of the Pearl River delta outside Canton. It would later pass the old anchorage at Whampoa. The sight of the river delta called to mind Boat Quay and the Singapore river. The waters red and heavy with mud silt set against a warm and humid summer heat.

The atmosphere at the arrival dock was electric and rightly so since HRH the King Carl XVI Gustaf and HRH Queen Silvia of Sweden had joined the crew on-board in this last leg of the old trade route trip. 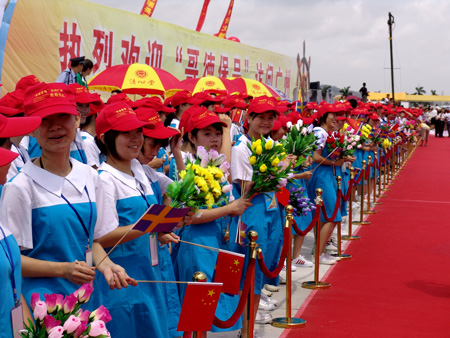 Lining the red carpet, hundreds of school girls and performers to welcome the Götheborg III 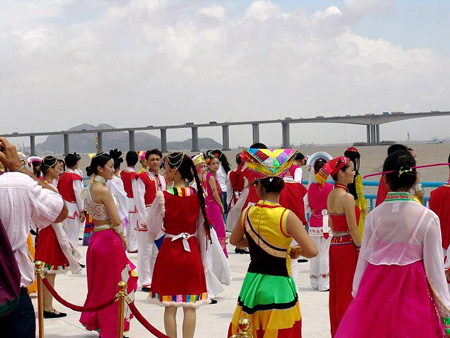 Dancers in a myriad of colours, awaiting the arrival of the Götheborg III

The arrival of the ship and the presence of HRH the King and Queen of Sweden caused quite a press frenzy. They were utmost professional in their patience awaiting the arrival of the ship, setting up their cameras, chatting under their umbrellas and sipping water now and again; and then their “kill anyone standing in the way!” flurry when the ship arrived. NOTHING could stop them from getting that right shot! 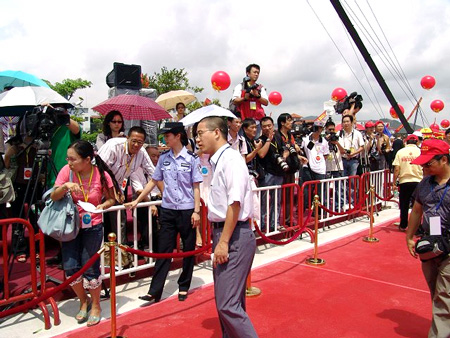 The press stand, at a calmer point.

Travelling with the Initiators of the project had its perks – I had the chance to walk the red carpet! 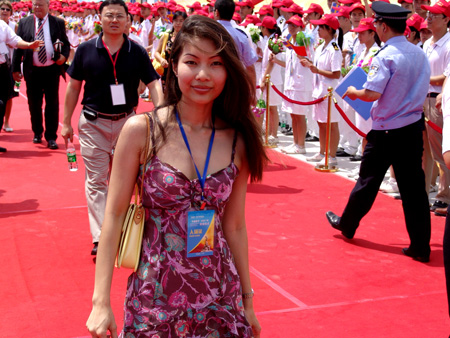 We positioned ourselves right behind the live camera crew, 2 m from where the ship would dock. We waited for quite awhile actually and just when I was getting restless under the blazing heat of the sun with no umbrella or hat for shade, I heard the Chinese band go up in a raucous boom of trumpets, drums, flutes and cymbals. Rowdier than at a Chinese wedding and louder than what I recall from a Singapore Chinese New Year festivity! 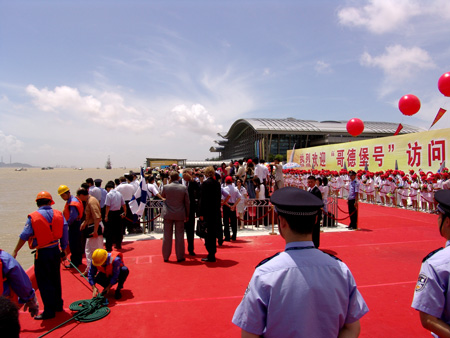 A view from where we were standing, of the red carpet and of the oncoming Götheborg III, on the horizon. 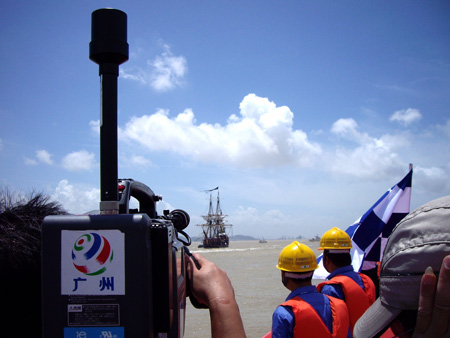 The Gotheborg III went through a traditional trade politeness call, where they shot a traditional 8 canon salute, indicating that they have come in peace, emptying their canons. 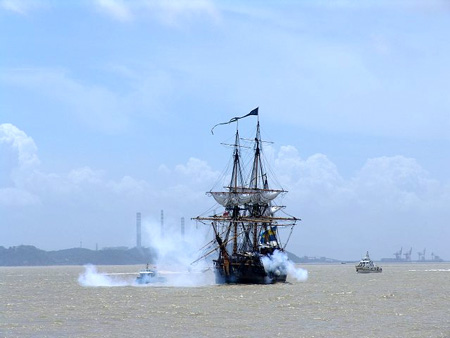 A picture of calm isn’t it, the Götheborg III? But in reality, the surrounding was filled with the sounds of canons blasting, the sound of drums and not in the least, the helicopters circling the Shp from above!

The ship finally docked and we could now see all faces on-board.

The first things they did were to roll out the Swedish colours and the Chinese colours on the masts of the ship. A symbol of cooperation and trade between Sweden and China. 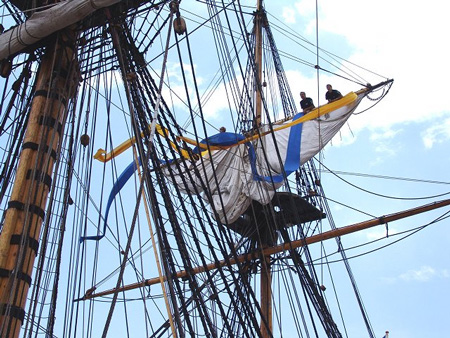 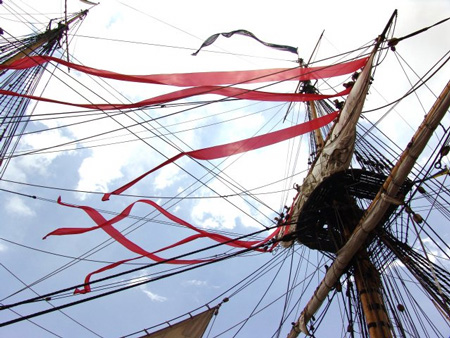 Even though She docked, it took quite awhile before anyone could step off since the docking procedures in itself took about half an hour. And there I began to wonder, what would it take to commandeer this ship? I think the answer lies with the City Council of Göteborg.

Well, all riggings were in place and so the ladder came down and all on-board could step foot again on land – a long wait for some sailors on this trip. 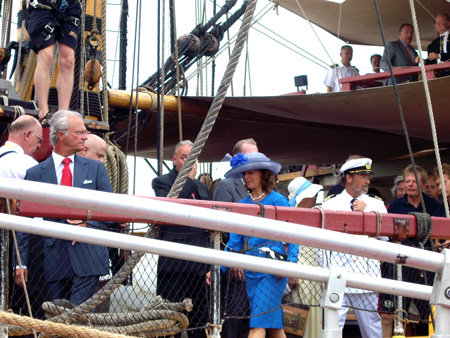 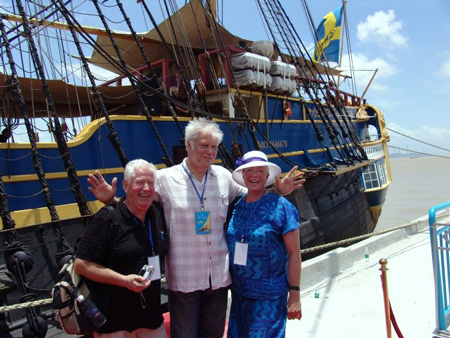 Anders Wästfeldt, Berit Wästfeldt and Jan-Erik Nilsson, exuberant in front of their “baby”.

All of us were eager to board the ship but a little bit of continued press flurry meant we had to wait awhile more. The lady in pink you see below, with the pink hat is Connie, our tour guide. She also acted as a translator during interview time with the Chinese press. 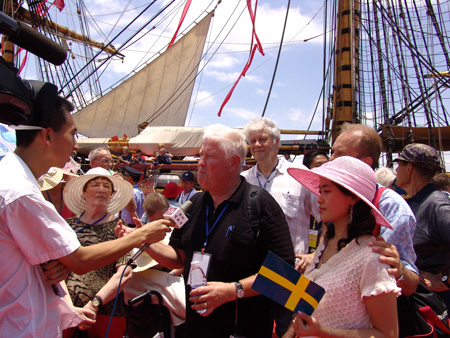 The press with Anders and Jan-Erik.

Our guide Connie was a delightful personality. Full of bravery and humor. Her petite frame belies the manner in which she tackles questions and puts across her point of view. She got really popular with our entire group even though she seldom minced words. We called her famed lines during the tour trip Conni-isms. Here are just a few we remember:

To us on the railway station:

– This is the railway station. You should never go there. I went there once and there are only thieves there! I looked away for a second and, they stole my earrings!

While guiding us through the city, on board the tour bus:

– There are no beauties from Guangzhou. Look at me, I’m not from here.

– You see the houses over there? Beautiful right? All owned by corrupt politicians! So expensive, nobody else can own them!

After the fuss died down and the crowd started to thin at the dockside, we walked around some on-board the ship. There were talks and tours going on but I found myself a quiet spot on the upper deck of the ship, to contemplate the view of the Pearl River. There was a light breeze blowing, a relief and contrast to the sweltering heat below from where we came. 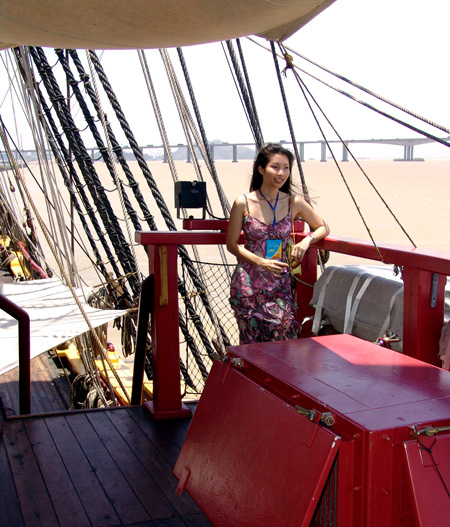 On the upper deck

Though I’ve been on-board the Götheborg III during the process of its building and before its setting sail to China, walking on-board Her in Canton made me feel as if I was saying a warm hello to an old friend. I could sit on Her without saying a word and have an understanding of Her and where she’s been, what she’s seen. 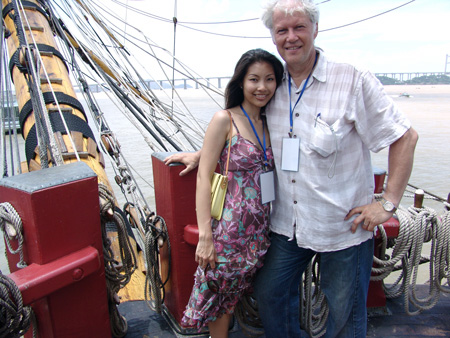 A picture of myself and my husband, Jan-Erik Nilsson

The final destination during this stay for Her was opposite the White Swan Hotel in the city of today’s Guangzhou (Canton), right where we stayed during our Canton trip.