Artichoke, dining on a sexy weed 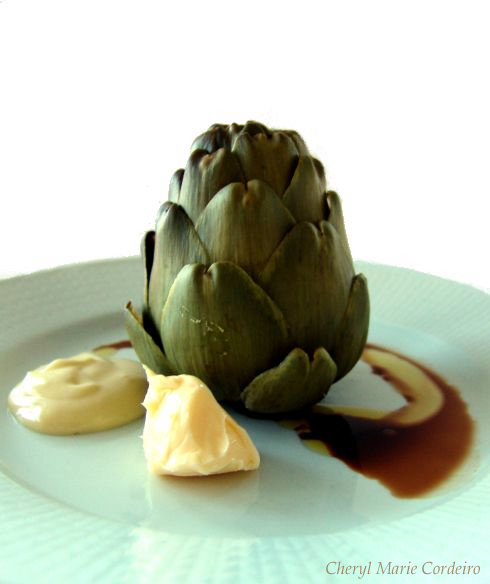 “These things are just plain annoying. After all the trouble you go to, you get about as much actual “food” out of eating an artichoke as you would from licking 30 or 40 postage stamps. Have the shrimp cocktail instead.”
~ Miss Piggy (The Muppet Show)

The first time I saw an artichoke I drew a complete blank on how to cook them. These beautifully crest-petalled flowers don’t have much of a history in Singapore and are certainly not your average hawker-center staple.

It took some time for me too, to recognize them as part of the Italian Quatro Stagione (four seasons) pizza where the soft heart of the artichoke is used to symbolize the spring.

The artichoke itself is the bud of a thistle flower. The plant can be almost 2 meters high. If allowed to flower, blossoms measure up to 7 inches in diameter and are of a vibrant violet-blue colour. It also seems to have most of its history around the Mediterranean basin. 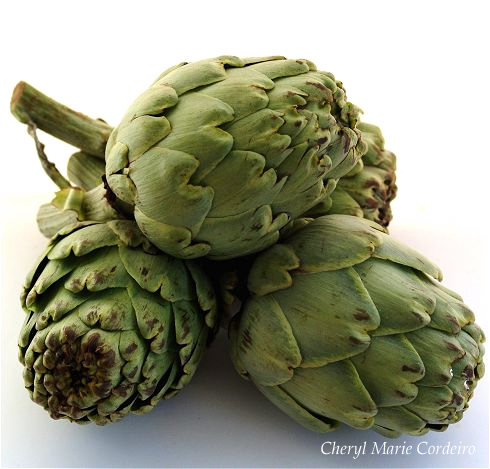 The artichoke is known from Greek and Italian sources from before the time of Christ and might have been cultivated in monasteries until medieval times for its medical properties. In the 16th century it was introduced as a popular Italian dish into French social life through the marriage between Catherine de Medici and King Henry II. Somehow this led to the belief in France that only men could or maybe even should eat artichokes, while women who dared to eat the vegetable were considered to have loose morals. 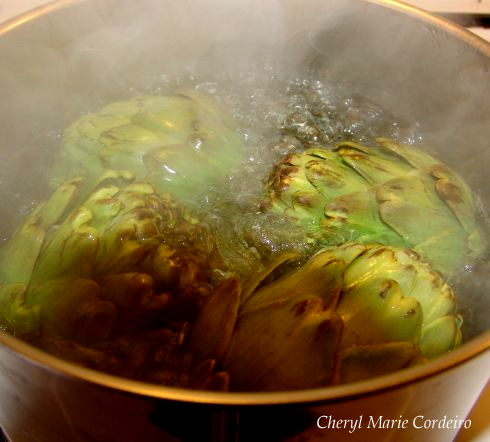 Cook without lid for around 30 minutes or until the outer leaves can be easily pulled off.

In Greek mythology Zeus – who was ruler of the Gods and the God of Sky, Lightning and Thunder, son of Saturn and brother of Neptune, and married to the goddess Hera – one day spotted a stunningly beautiful young mortal woman, Cynara and seized the opportunity to seduce her. Zeus was so pleased with the girl that he made her a goddess, so that he could see her when Hera was away. However when the moment arrived Cynara had become homesick and had gone back home to see her mother. This made Zeus so angry that he threw Cynara back to earth and turned her into a thistle – the Cynara scolymus, which is the Latin name of the artichoke.

Both the ancient Greeks and Romans loved artichokes and considered them not only a delicacy but also an aphrodisiac. In Crete today, the artichoke is eaten raw, dipped in lemon and olive oil together with the local alcoholic beverage by men at the local cafés. They too are claiming that artichokes are potent aphrodisiacs!

In the United States, artichokes have been grown commercially in California since the early 20th century. The city of Castroville even claims to be the “Artichoke Capital of the World.” As a curio, California even has an Artichoke Queen — the most famous queen was Marilyn Monroe in 1947. She is said to have inspired more people to eat artichokes in that year than any year before or after her reign as Artichoke Queen.

Since the plant is reputed to be a powerful aphrodisiac it is not actually known whether she helped the artichokes to their road to fame, or the artichokes helped with hers.

What we do know is that the artichokes are very healthy. They are rich in minerals and the B vitamins niacin and folacin. They are also the source of the medical substance cynarin, which has de-poisoning effect on our livers and gall. 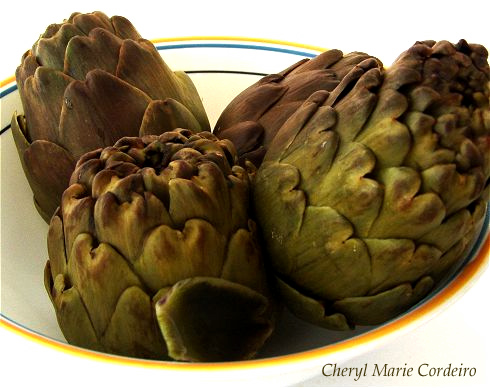 The artichokes give a wondrous aroma when whilst cooking and turn only a slighter darker shade when done.

To cook an artichoke is a pretty straightforward affair. Twist or cut off the stalks so that you get a flat bottom for the presentation. Rinse and cook without a lid over the pot for around 30 minutes, or until the outer leaves of the artichoke can be easily pulled off. It is also perfectly fine to steam it in just a few inches of water. Some recipes mention the use of a microwave oven but I have never done that myself so I can’t guarantee the result.

If you are cooking larger artichokes, it is suggested that you might want to cut off the tips of the leaves because they can taste bitter. Other recipes recommend simply cutting off the top part of the bud but I somehow I feel that isn’t the right ting to do with a plant that is specifically known to be an aphrodisiac. 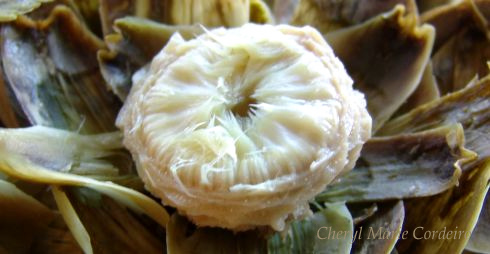 When the leaves are gone, you can then use a fork or spoon to scoop out the hairy inedible layer, called the choke and discard. What remains is the artichoke heart, which is the softest and tastiest part of the whole thing.

Larger artichokes could most favourably be served with the inedible middle parts removed and stuffed with a shrimp or crab salad.

When serving, my absolute favourite is simply some soft stirred butter and sea salt, to dip the edible parts in. The flavour of the artichoke is very subtle and if you like it as it is, anything more than that risks overtaking rather than enhancing the flavour.

Olive oil is also the soul mate of the artichoke and might combine well together with fresh lemon juice.

Mythology aside, the very act of eating artichokes can be an incredibly sensuous affair as you slowly peel back layer upon layer of the petals of the flower-fruit with your fingers, lick, suck and nibble the outer leaves to finally get to the heart of the matter – the tender, juicy artichoke heart. Artichoke eating could well be the perfect meal for a long weekend couple getaway.