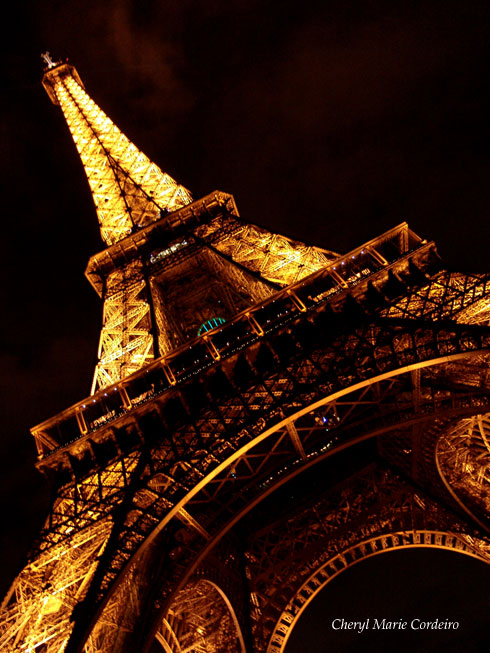 Under the Eiffel Tower at night in early spring in Paris, France.
Photo © Jan-Erik Nilsson for CMC, 2009

Considered by the French as a national embarassment and an architectural eyesore on French landscape when it was first erected in 1889, the Eiffel Tower is now one of the world’s most recognizable construction. Though not the highest lattice tower in the world, it could well be the most replicated structure of our time and you can find versions of it in countries such as China, Russia, Kazakhstan, Bulgaria, Romania, the USA and Denmark.

But we were in Paris to do all things crazy and romantic, so why not.

It took less than ten minutes from where we were to get to the Eiffel Tower by taxi. When we got out, instead of pitch black deserted grounds as I had expected, we were greeted by crowds of people in vibrant, cheerful spirits. Tourists and Parisiens were there on excursion and you had local street vendors who sold everything from roses to stuffed plush toys, Eiffel Tower keychains and all sorts of sourvenirs they could wrap up under their generous woollen coats. 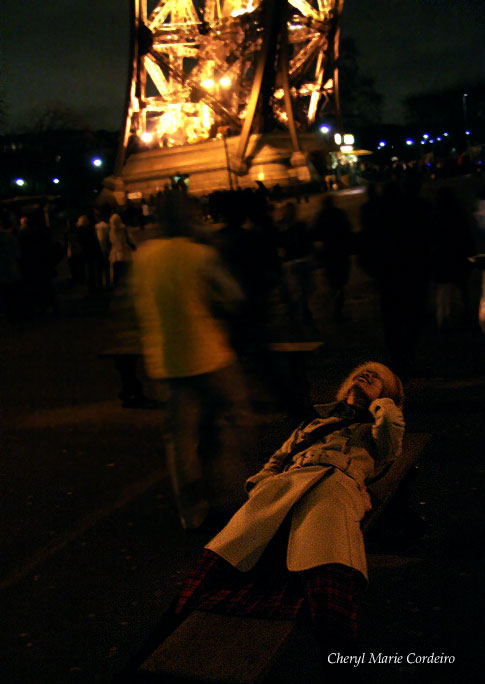 Myself, lying on a bench under the Eiffel Tower, looking straight up in to the belly of the trellised structure.

The visual journey and experience of the Eiffel Tower begins even before you get close to its ticketing entrance. The intricately latticed structure knocks the wind right out of your lungs just by you standing at the base, looking up. It’s as if you were looking up into the heart and core of this enormous construction of iron. The flickering lights by night made it look like the Eiffel Tower lived and breathed the very heartbeat of Paris and you’re at once entranced and puzzled by how soft and romantic a piece of metal structure can look. 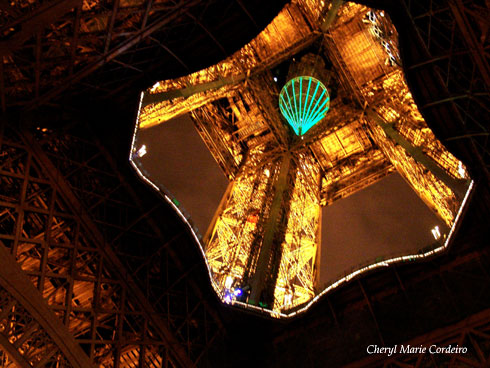 This was what I was looking at laying down on the bench – a view from under the Eiffel Tower.

Once up in the Eiffel Tower, the place presents a wonderful evening of exploration. If you indeed took your time to enjoy the sights and sounds of the inner Eiffel Tower, you could choose to have dinner at one of the two restaurants located on its first and second floors. Our recommendation is Le Jules Verne restaurant which has access via its own lift in the Eiffel Tower. This restaurant, which is a one star in the Guide Michelin offers a picturesque gastronomical experience over a view of Paris! 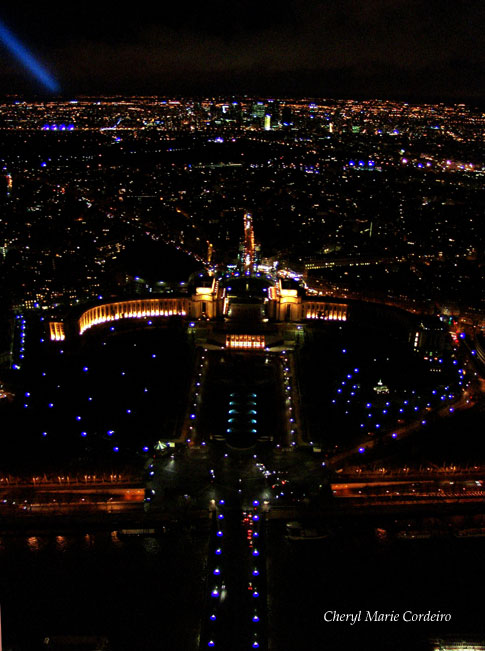 One vantage point from the top of the Eiffel Tower, overlooking the Palais de Chaillot.

At the top of the Eiffel Tower, we found the observation deck quite similarly caged as the Empire State Building’s top deck. It took awhile for the eyes to adjust to the night light before you found landmark buildings below, from the Eiffel Tower’s vantage point. And what marvels to behold when you finally realize what you’re looking at from above!

The picture immediately above shows one view from the top of the Eiffel Tower. You can see the structural columns of the Palais de Chaillot in its backlit glory. In that direction, behind the banks of the river Seine is also the view of the Musée de l’Homme, Trocadero Gardens and further away but also in sight is La Defense and the Grand Arch. 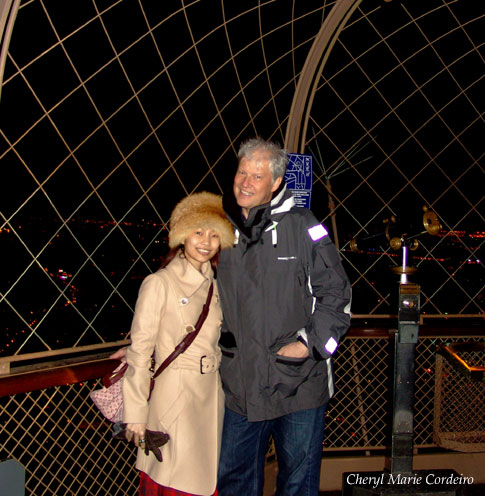 JE and I at the top deck of the Eiffel Tower by night in Paris, France.

As if to confirm our impressions that the Eiffel Tower had a beating heart and that it was softly supple in all its metal lacings, the structure swayed gently with the winds of the night. This swaying in the wind is something very real that you can feel as you walk around the top deck of the tower.

As we eased into the rhythm of dance of the Eiffel Tower and the wind, we found something quiet and serene about looking over a night-lit Paris. And we could have spent all night looking at the lights of Paris that made the city look like a large onyx gem dotted with blue and yellow sapphires. The city up there, was breathtakingly beautiful. 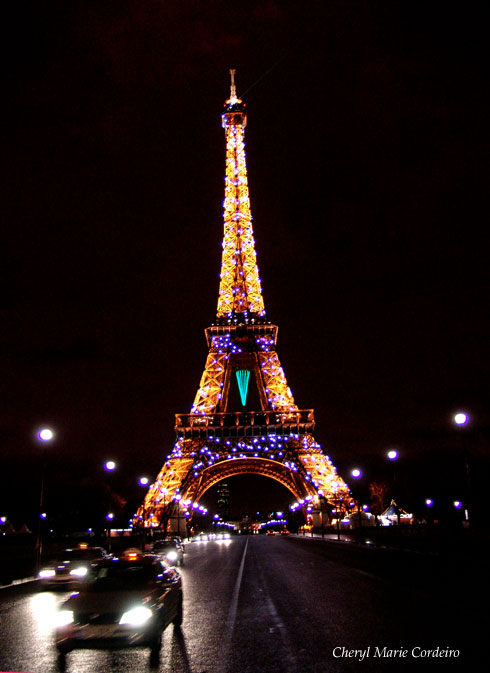 View of the Eiffel Tower from the Iena Bridge.

Upon ending our tour of the Eiffel tower in itself, we set upon looking at it from afar.

The Eiffel Tower looks just as spectacular further away as it is up close and from the inside out. The view from the 1814 constructed, 28m long Iena Bridge proved a magnificent place to stop and have a turnaround look at the Eiffel Tower by night.

The Eiffel Tower by night? Well, it turned out a splendid thing to do!