Friday Glam! A dress with a story

I was graduating from college and had a prom to go to, with no dress. It didn’t occur to me to go find one in the stores, I thought evening wear and prom dresses were generally costly.

But, I had been looking at my parents’ wedding pictures at the time and thought my mother’s wedding gown was beautiful. It was one that she had crocheted herself, being unable to afford to go to a wedding atelier to have a dress rented or sewn to fit her at the time she was to be married. The picture below shows my mother in the dress (the picture has yellowed some with time). 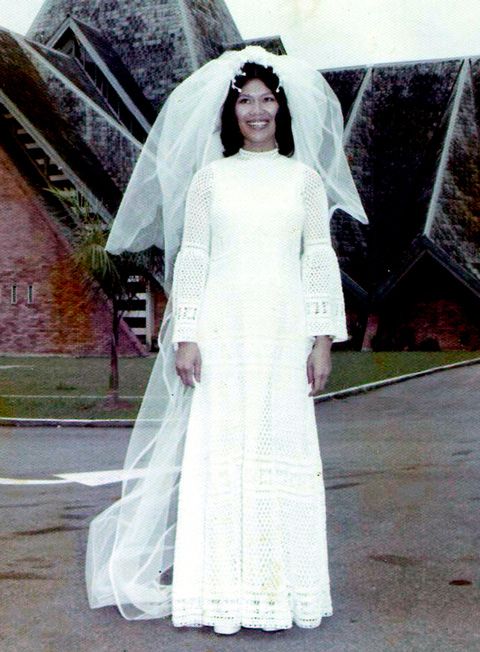 Twenty years down the road and my mother still had her wedding dress, much to my delight! So I asked if I could borrow that dress for my prom. Yes!

We took it out of the cupboard where it sat behind all the daily clothes and clothes that were more often worn. It was in surprising pristine condition, well kept and for a crocheted dress, it still kept its shape. I remember the feeling of glee when I took the dress out of the package, like a little child opening a Christmas present.

Creamy in colour and soft to the touch, the dress did indeed look as beautiful in real life as it looked in the pictures on my mother.

It took awhile to undo the buttons at the back of the dress, but when they were undone, I slipped it over my head.

Only to find that it didn’t fit.

The shoulders were too narrow – which surprised me because I always thought my mother and I were the same size. Well, apparently, she was much smaller built than I.

But she offered to crochet me that dress, for which I am utterly grateful for, with a slight modification of the sleeves, at my request.

Looking at pictures of my mom’s wedding dress and of this dress, I figure that given a choice today, I would have kept the original sleeve design, which was tight at the top, opening to a bell sleeve at the bottom. A quintessential 1970s sleeve design. This dress design does actually come from the 1970s era.

I believe I wore this dress with a dark body suit under it to the prom. Today, I don’t think that was an all too good a combination to show off the dress for its beauty. On hindsight, I should have gone all white, but I did not want the dress associated too much with a wedding gown.

As it all turns out, this dress was also worn at my wedding last year, as a “winding down” piece, when all the guests were about to leave the party.

2 thoughts on “Friday Glam! A dress with a story”