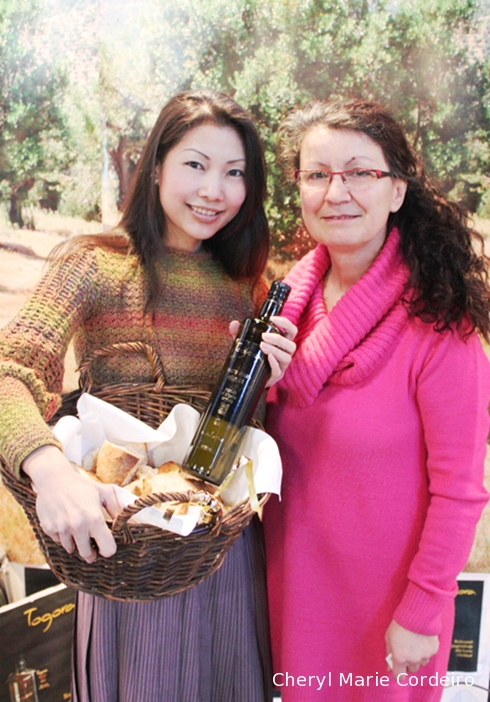 What I love about traveling is the adventures and the new experiences that come with it. My favourite souvenirs are new food ideas, and where possible, I love bringing home local produce of the region coupled with recipes of places I’ve visited and of dishes I loved. Eventually I will also synthesize the experience, mix and match with things I already know and make the experience my own.

Meeting with Lambriní Theodossious who owns her own olive plantation on the islands of Lesvos in Greece at the Passion for Food Festival 2013 in Gothenburg, Sweden, was another one of those wonderfully unexpected experiences. She brings her efforts of love in the form of dark bottles of unadulterated olive oil which she produces herself with some help of local farm hands, from Greece to Sweden. Its called the Todora Olive Oil, named after her grandmother Theodora.

“My lifelong dream has been to own an olive grove and see the ocean meet the sky from the grove top, sitting in a hammock under an olive tree, contemplating the flavours from my own olives and the olive oil, with no added chemical sprays and more. Plain and simple, to truly enjoy what I’ve produced”, she told. 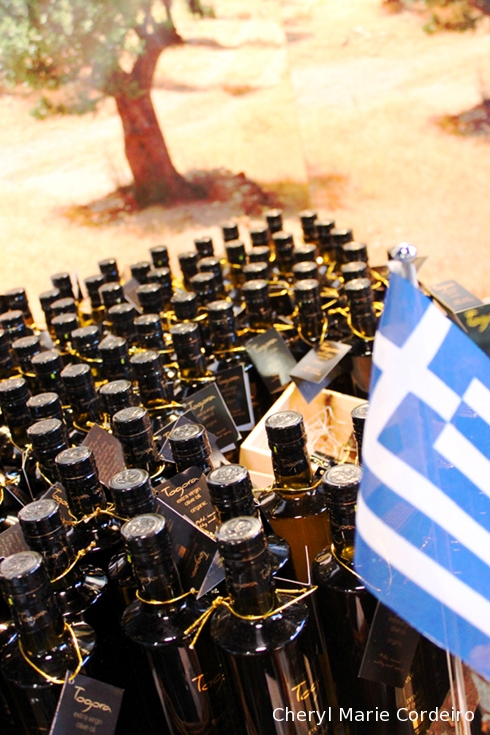 Bottled from Lambriní’s 1500 olive trees on the island of Lesvos.

And “to make my own” is what Lambriní Theodossious goes back to time and time again when talking about her life’s passion and dream that quite reminded me of the utmost determination of Steve Jobbs in creating his own reality. Fervent and spirited are words that describe Lambriní.

The Emerald Island
With about eleven million olive trees, Lesvos is lush and aptly named the Emerald Isle set in the deep lazuline hues of the Aegean sea. The island continues to be a hidden gem of a paradise till today, being by and large untouched by global capital and harsh modernizations that easily can strip a place of its sense in history.

Listening to Lambriní, curiosity turns to excitement and to wonderment as she describes her island, with a history dating back to ca 3300 BC.

The island has always been a place for inspiration and musings, being home to early Greek poets and inspiring great minds of all times. What stories to hear of a place that had all kinds of historical links, from belonging to Persia in antiquity and then to the Roman Empire, followed by the Byzantines and the Ottoman Empire. Even in antiquity, the geographical location made the harbours of Lesvos a hub for trade and communications. 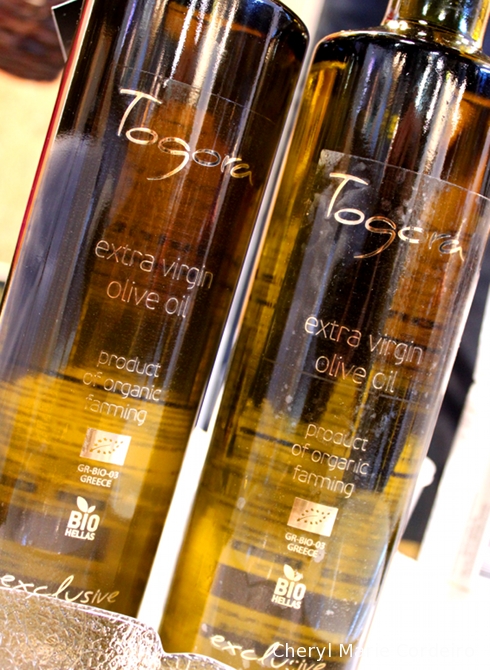 The seductive verdant of Lesvos, illuminated and intensified under the spotlights of the stalls at this food fair. Enticing. 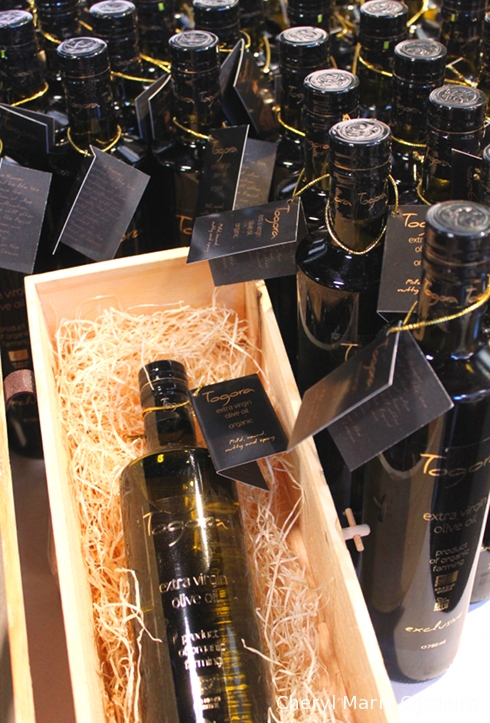 Gift packaged. From antiquity to modernity, when a gift – that of olive oil – seems never to go out of style. 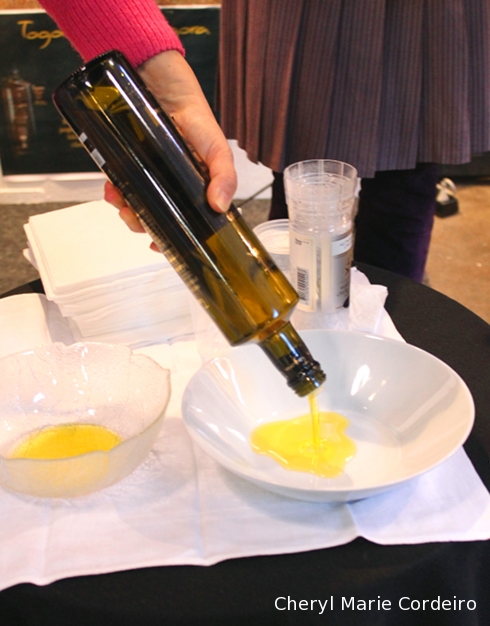 Wine and olive oil were in ancient times, celebrated agricultural products of Lesvos, distinguished from ‘barbarian foods’ from hunting and the gathering of berries and fruit. Olive oil was highly regarded as a luxurious product in ancient times (many would also argue that it remains a luxurious product till today depending on variety) because it was deemed cultivated and processed from scratch, with the hands and efforts of Man. Cups of olive oil were given as prizes during the Panathenaic Games (ancient Olympics from 566 BC to 3rd century AD).

Today it seems that the heart of Greece itself in terms of olive oil, budding from the coastal region of the Aegean sea is brought to the Swedish west coast via Lambriní and her efforts. What she wanted was to share with people, her love of nature and to find that balance between producing a quality product that is in symbiosis with the soils of Lesvos.

She is careful about how Togora olive oil is made, making sure that with the extra virgin version, the fruits are picked before they have ripened and fallen from the tree, the key to which is that they have never touched the ground and have never been through any refinery process. She is adamant that her olive trees be grown in an ecologically friendly manner, the ‘old-fashioned’ way, surrounded by almond, oregano and thyme bushes that give her product its characteristic taste. 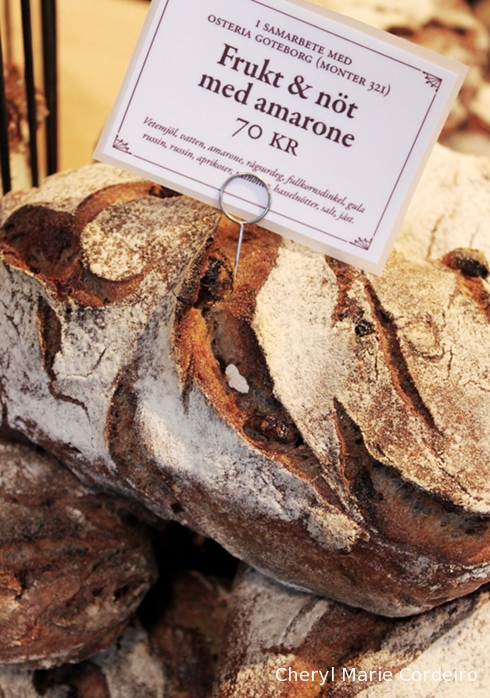 One thought on “Lesvos olive oil: from the Aegean Islands to the Swedish west coast”