Pandan Cakes are usually presented and served bottom up, coming out of its cake form. Here in this picture, a heavy crusted top of the Pandan Cake: its golden brown crust broken with a vibrant green peeking through.
This is the cake, au naturel. Neither Pandan paste nor green colouring were used in the making of this cake.
Photo © Jan-Erik Nilsson for CMC, 2009

The Pandan Cake was one of my first cake loves when growing up in Singapore. A lot of Southeast-Asian cooking calls for the use of pandan leaves, from a few blades cooking with coconut rice to its larger varieties wrapping glutinous rice, sweet meat dumplings, all because of the sheer irresistable fragrance of the long slender blades.

The uses of the leaves of the Pandan plant are so rapacious in Southeast-Asian recipes, that it hardly proved handy growing a plant at home because it would be consumed much faster than it grew and more leaves had to be bought from the wet market anyway.

The blades of the pandan plant are so fragrant that people in Southeast-Asia often use them as natural air fresheners, a bunch of knotted Pandan leaves casually tossed behind the back seats of cars. 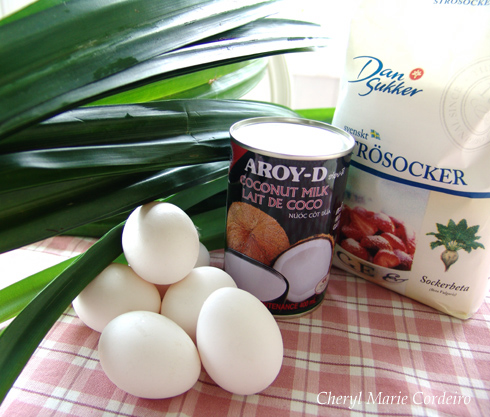 Some ingredients needed for the Pandan cake.

I remember the slices of the Pandan Cake as vibrantly green when growing up, where a liberal slice for breakfast on Sundays would generally make my day. But with modern bakeries, the homemade Pandan Cakes disappeared from the wet market stalls and in their place, pre-fab versions were sold in a variety of greens – some dark green, some very light green, almost yellow in colour and some others, a spine chilling synthetic green.

It is the wide ranging greens of the cake, sold in bakeries, wet markets and grocery stores in Singapore today, that made me curious and really want to go back to making this cake using fresh blades of Pandan, without the use of food colouring or bottled Pandan paste. 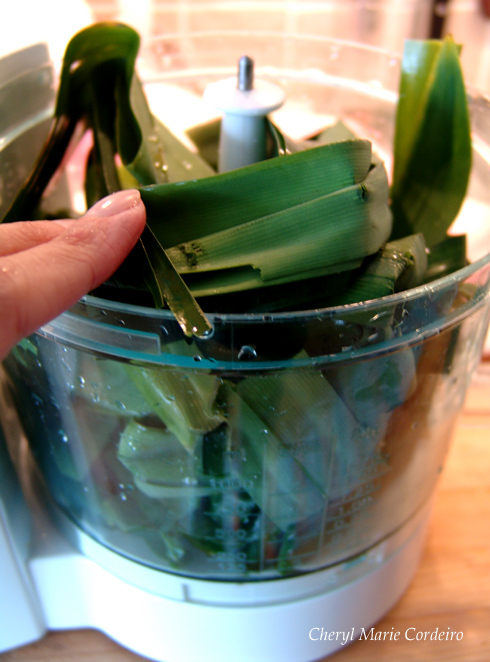 Pandan leaves in the blender.