World Water Day and a walk down the CHIJ memory lane, Singapore Watercolour of CHIJ Katong Convent.
The Infant Jesus (IJ) schools were founded in heritage by the Minim Friars or the Order of Minims, that was in turn founded by St. Francis of Paola (1416-1506). The Order is still active in France, Germany and Spain.
Text and Photo © Samantha Lim, JE Nilsson, CM Cordeiro 2013

Today CHIJ celebrated this anniversary in conjunction with the United Nations World Water Day with an early morning Walk for Water event, that took teachers and students from CHIJMES near Raffles City to the Marina Barrage.

I have far too many stories from these years than I can share, but it seems a quick stopover at the CHIJ Katong Convent website showed several threads of continuity from fun and laughter in and between classes, to the school’s ongoing humanitarian and fund raising efforts, their motto still being Simple in Virtue, Steadfast in Duty.

Some things never change
The school had its location since its founding in the early 1900s by the Marine Parade beach front. Out of sheer practicality, many school activities were held by the beach especially before noon, from geography lessons to physical fitness classes. 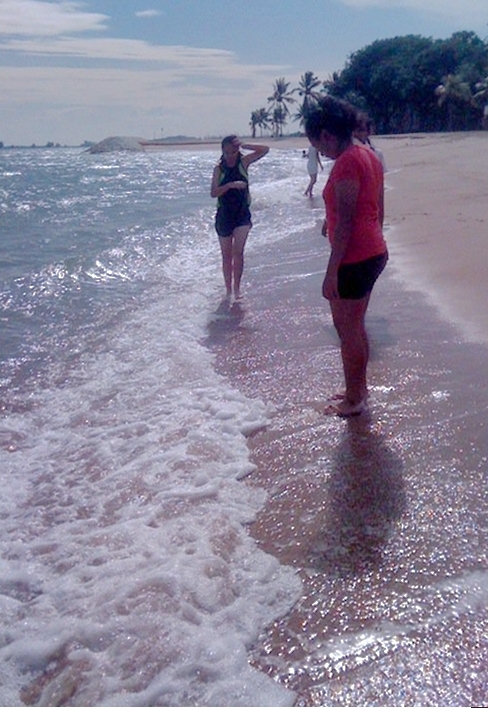 An IJ-Girls LOVE sculpture
The picture below is a wink towards the American artist Robert Indiana’s iconic LOVE sculpture, the original on display in the ‘Love Park’, near City Hall in Philadelphia, and a replica at the University of Pennsylvania campus ground, where in my time we did the same, but with Y.M.C.A. 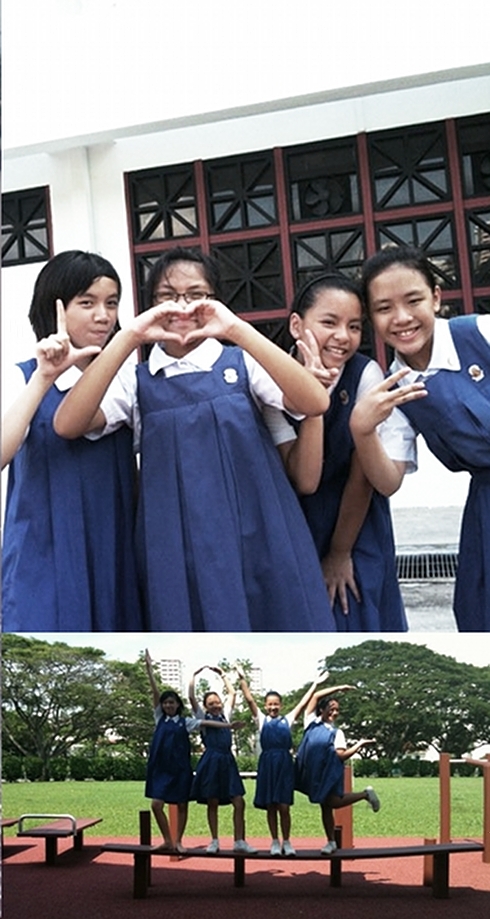 An IJ-Girls Love Sculpture.
This was something I did too with my own girlfriends during my days at the Convent, except we were all into Y.M.C.A – a Freudian statement perhaps since directly opposite CHIJ Katong Convent was the boys-only school St. Patrick’s, where the two schools were connected via a bridge, known during my time there as ‘the Love Bridge’. Though there are many stories to tell, not all were too fun, since my father was eventually the Principal of the St. Patrick’s, and I, in the Convent’s Prefectorial Board.

Streaming of students system
During the 1970s through to perhaps the 1990s, the education system in Singapore had streaming exams at different junctures, so that they could group students in accordance to their grades for various subjects in a class of about 40 girls each. They continue to do so today, though with different measures. Katong Convent at the time had their graduating cohort divided into 7 classes, beginning with pure Arts, labelled class of 4/1, all the way to pure Science, labelled class of 4/7.

Having come from the graduating pure sciences class of 4/7, where we studied the triple science subjects of physics, chemistry and biology, we were curious girls who liked asking teachers a lot of questions. We got restless easily and more often than not we must have caused considerable discomfort to the teachers rather than fitting easily into the “girls are so nice and cute” mould.

We were more than a handful to deal with. We were never quiet when we were told to be quiet and hardly seemed to listen when we were told to sit and listen. I am not that entirely certain that gender separated schools are the way to go to help children to grow up. Personally I believe it had been easier to focus on the studies if there had been less mysteries of life to ponder on distance, or just across the bridge, for all of us.

Katong Convent corporate video
I particularly enjoyed watching the Convent’s current corporate video, that contained many names I personally recognized from my own school days. The video had me smiling at when they emphasized how they encouraged “character development” in the girls.

Today many of my former school mates live and work outside of Singapore. I feel we all find ourselves moving forward in life, doing new things and opening new doors that lead to new paths.

Since my days as a curious girl at the Convent, I have also come to realize that a question, no matter how seemingly dull can bring up some real gems in the process of finding the answer.