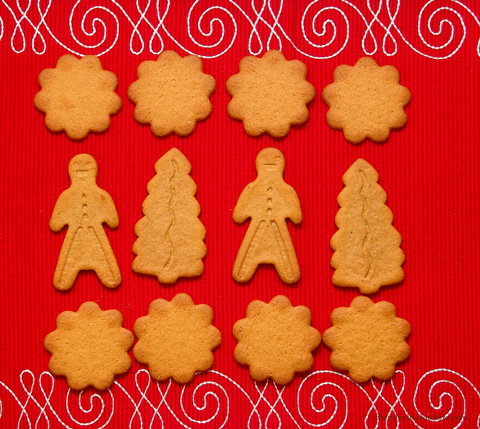 Gingerbread cookies laid out on a festive red place mat

Pepparkakans dag or gingerbread cookies day, falls on the 9th of December in Sweden, which happens to be today!

While the gingerbread cookie is most often associated with Christmas in Sweden, it is in fact eaten all year round. But then again, I’ve personally observed that it is during the Christmas season that all fantastic creations of gingerbread dough occurs! You can most often see these delicious architecture of cookie dough displayed at bakeries and candy stores in towering miniature houses replete with Santa and reindeer.

Today, I’m a much bigger fan of gingerbread cookies and even have a couple of favourite off the shelf brands. What gets me eating is also the belief that if you tapped with your knuckle in the center of the cookie and it breaks into three pieces, you get a chance to make a wish. So it is not uncommon that on the table, you find a small heap of uneaten broken cookies – too many cookies, too few wishes. 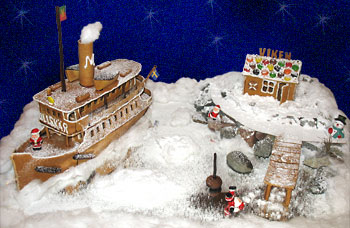 A gingerbread boat from Pepparkakshus, 2006 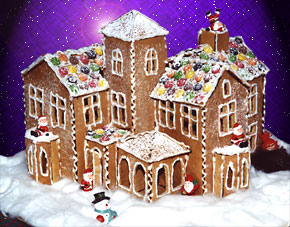 A detailed gingerbread house, from Pepparkakshus, 2004 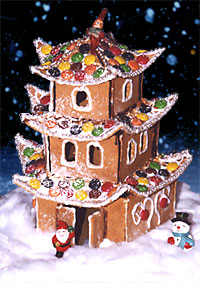 An impressive Pagoda, from Pepparkakshus, 2003

Here’s a brief write-up on gingerbread cookies in the Swedish Wikipedia:

The Christmas Ginger bread cookies are usually shaped as hearts, stars and other Christmas related symbols. The history of the Ginger bread cookies is thought to be very long. If you compare the ingredients in the cookies of the medieval times it is not much that differs from today, beside that they actually contained pepper. The taste was most probably much the same. Important spices in Ginger bread cookies are cloves, ginger, seville orange and cinnamon. As raising agent, one usually uses soda and as sweetener, syrup and white sugar.

The first documentation of the gingerbread in Sweden dates back to the 1300s when gingerbread cookies were baked for king Magnus Eriksson’s wedding. Gingerbreads were also baked by nuns who sold them as medicine to the apothecaries. People believed that gingerbreads would make them better tempered and easier to be around.