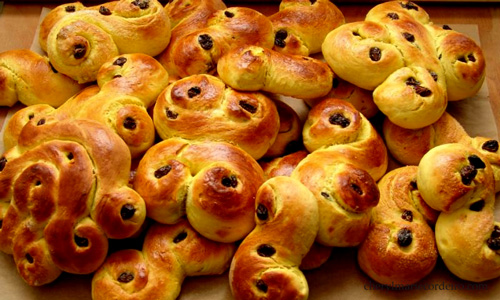 Our batch of Lussekatter or saffron bread this year, for Lucia

I’ve asked some Swedish friends of mine, the significance of the festival of St. Lucia in Sweden. And few knew its actual significance, except that it arrived from Italy, back when Sweden was still Catholic (today it is more Lutheran), before 1700s.

Traditionally, Lussekatter are baked without raisins in them, but as you can see from our batch above in the picture, we cheated some with adding raisins in the dough. The bread is extremely fragrant, with the smell of saffron. It does tend to dry out quickly, also because of the saffron but we hope that with the raisins in the dough, it’d stay moist just slightly longer. The saffron bread, as with most breads, tastes best fresh out of the oven. But if left for the next day, it helps with heating the bread in the oven or in the microwave oven before eating. Enjoy with a warm glass of milk!

I found a fuller account of the festival of St. Lucia via a quick search on the internet. The information below is from the website of New Sweden

The festival of Santa Lucia begins before dawn, on the thirteenth of December, which under the old Julian calendar (used in Sweden before 1753) was Christmas Day and the longest night of the year. Throughout Sweden, the eldest daughter in each household comes to her sleeping parents, dressed in a long white gown tied with a red sash, and wearing a crown of lingonberry leaves in which are set seven lighted candies. In her hands she carries a tray of steaming hot coffee and “Lussekattor” (Lucia Runs). The procession includes her sisters and brothers also dressed in white, holding lighted candles, and singing of the light and joy of Christmas.

The sisters of the Lucia Bride wear a wreath of tinsel in their hair and a piece tied around their waist, while the boys have tall pointed caps sprinkled with stars. Awakened by the lights and the singing, the parents arise and eat the breakfast served, thus ushering in the Christmas season.

Scandinavian tradition holds that in Värmland, Sweden, a white-clad maiden, wearing a crown of burning candies, brought food to the starving villagers on the shores of Lake Vänern. No one knows how long ago the tradition began, but it was so far back that the festival of Santa Lucia was marked by a notch on the primitive “primstav” (calendar stick), the precursor of the calendar. It later became customary in western Sweden to finish the threshing by Lucia Day so as to begin the cooking and baking for the long Christmas festivities. From its beginnings in Värmland, the customs in honor of Santa Lucia have spread throughout Sweden, and more recently to the rest of Scandinavia. Today, the festival is celebrated in schools, hospitals, businesses, and towns; each of which has its own Lucia Bride and festivities to mark the beginning of Christmas. Santa Lucia Day is also an international holiday, celebrated not only in Scandinavia, but also in Italy and France in the rites of the church.

However, the origins of this tradition are not in Scandinavia, but in Syracuse on the island of Sicily around 304 A.D. According to the Sicilian legend, Lucia’s mother, a wealthy lady, had been miraculously cured of an illness at the sepulcher of Saint Agatha in Catania. Lucia, a Christian, persuaded her mother in thankfulness to distribute her wealth to the poor. So, by candlelight, the mother and daughter went about the city secretly ministering to the poor of Syracuse.

Unfortunately, this was during the last great persecution of Christians in the reign of the Emperor Diocletian. The pagan young man, to whom Lucia was engaged, took a dim view of this distributing of her dowry, and denounced her to the prefect, Pascasius, who ordered that she be seized and tortured. Miraculously, when neither boiling oil nor burning pitch had the power to hurt her, she was blinded and slain with a sword. Her martyrdom is recorded in ancient sources and in an inscription found in Syracuse.

How or when this legend and tradition came to Värmland, Sweden, no one knows. With the coming of Christianity to Sweden shortly after 1000 A.D., missionaries and priests may have told the story to inspire new converts. Another possibility is that sailors from Sweden may have been captivated by the popular candlelight festival of Santa Lucia in Italy and brought the tradition back with them. A newer theory, requiring more research is that St. Birgitta (1303-1373), during her stay in Rome (1349-1373) in her effort to get papal approval of the Bridgittine Order for women, probably wrote home to Sweden telling of the Lucia legend which was widely known in Italy. As Lucia Day comes at the darkest time of year, the candies of the ministering Santa Lucia portend and witness to the True Light-the birth of the Lord Jesus Christ. On the morning of the thirteenth of December, the strains of “Santa Lucia” are heard everywhere in Sweden as the white-robed maiden comes out of the night with her burning crown of candies dispelling the darkness. In honor of her martyrdom, It has long been the custom to donate money on Lucia Day to institutions working for the blind.

Since 1956, the Scandinavian Club of Portland has preserved the beauty of this ancient tradition with a festival celebrating the coming of Santa Lucia preceding the Christmas holidays. In 1960, the club collaborated with Lloyd Center, providing a spectacular setting on their ice pavilion for the coronation of the Lucia Bride each year. In the tradition of the charitable life of Lucia, the court members visit churches, hospitals, local businesses, and homes for the elderly telling the story of Santa Lucia and bringing the holiday spirit into the hearts of all they meet. These girls are goodwill representatives of all Scandinavian communities in Oregon and southwest Washington, and of the countries of their forebears- Denmark, Finland, Iceland, Norway, and Sweden

4 thoughts on “13th December: the festival of St. Lucia with Lussekatter”