Freshwater crayfish to a kräftskiva, 2009 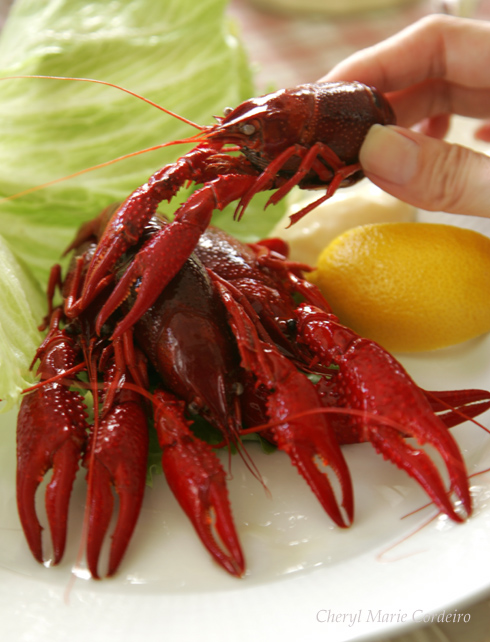 Freshwater crayfish from Turkey, voted best in taste by the newspapers, Göteborgs Posten and DN, Sweden. Despite an ever present crayfish plague that began around 1985, the end of the 1990s saw a gradual increase in the production of Turkish crayfish from 320 to 1500 tonnes annually (Harlioglu, 2004).
Photo © Jan-Erik Nilsson for CMC, 2009

The month of August in Sweden is mostly dedicated to the Crayfish Party or kräftskiva, where tons of crayfish are consumed. We’ve already had our first batch of crayfish earlier this year around Midsummer, the difference being that the ones consumed around Midsummer, came from the sea and these pictured here, with a lovely deep orange-red, are of freshwater origins.

I can’t help but compare crayfish eating in Sweden with crab eating in Singapore. Eating either of them would be considered a social event of sorts in both countries, because the meat of the crustaceans are rather inaccessible and getting to the meaty bits is a complicated, time consuming, if not frustrating affair that is preferably done after you’ve eaten something else. 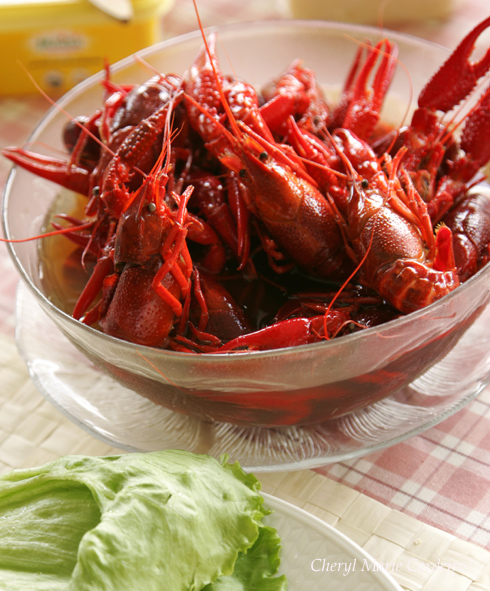 Crayfish eating, much like eating crabs in Singapore, is a social activity that definitely calls for good company, as the event can stretch over several hours.

Crayfish eating is a lot kinder in many ways. In Singapore, you have a mortar pestle to help break open stubborn crab claws; in Sweden, no such tool is needed for the crayfish, fingers will do. In crayfish eating, you needn’t have to spend half an hour peeling the shell to get to the meat. In Singapore, a half hour’s effort into the compartmentalized body of the crab renders less than enough for a crab meatball, like the ones you find in the Straits Chinese soup, bakwan kepeting.

Of all crab varieties found at the wet markets in Singapore, I find Flower crabs (portunus pelagicus) considerably hopeless to gather meat from and would be tempted enough to opt out of the crab eating session if they were served. The body of the crayfish, meatier than the average crab claw, is accessible in just about a single snap of the shell over the main section.

In Sweden, freshwater crayfish are relatively less expensive compared to those harvested from the sea. And in a test that proved that cheaper was better, these freshwater ones were voted best in taste in Swedish newspapers, GP and DN. GP had a panel of eleven persons ranging in age from 24 to 83 years old. The group tasted about ten different versions of cooked crayfish, ranking their favourites according to colour, taste and freshness.

After having tasted crayfish from both sea and lakes, these freshwater crayfish though smaller in size than the sea faring ones, tasted wonderfully full in flavour, excellent with some mayonnaise or aïoli, atop a piece of good bread.