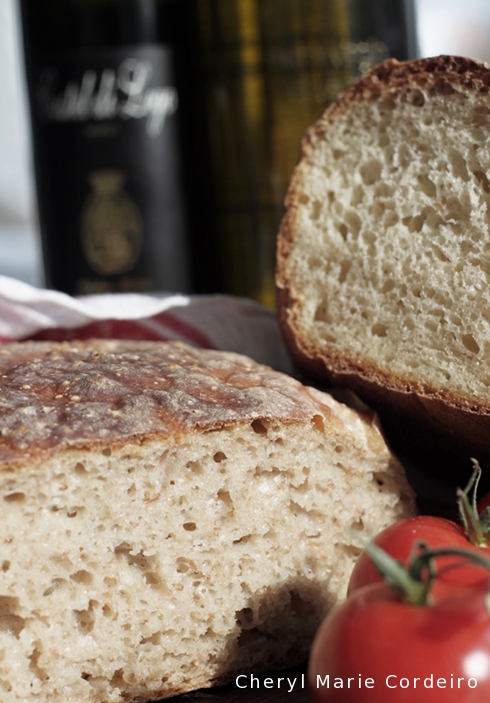 From a late night’s adventure in baking – two different types of sourdough bread, from a kefir culture and a buttermilk culture.
Text & Photo © CM Cordeiro 2013

At this year’s Passion for Food Festival 2013 in Gothenburg, one of the talking points was about how homebaked sourdoughs are now coming back into fashion in Swedish households. Most people still lamented the time it took for a culture to start and rise, this being the primary reason why sourdoughs were abandoned for decades as a household project due to a lack of time.

So sourdoughs were not always favoured in breadbaking history, and I couldn’t help but laugh when I read in a well-regarded Swedish cookbook printed in the late 1990s that sourdough cultures were cumbersome to work with because they tended to die on you, not give enough raising strength to the dough or worse, produce bread with uneven holes in the texture. And to think, at this year’s food festival, I was so taken in by sourdough bread with exactly those large, uneven roles going through its entire structure that I thought I’d adopt a sourdough culture as a pet project to see how it works out.

It’s been a few months and the culture is alive and well, no fuss to it at all, contrary to how it is often written about in numerous cookbooks and websites. Just see that you have enough of the starter after a baking project, leave it out a few days and I can almost assure you, it’ll live. Yeast and bacteria are after all, quite resilient organisms.

I now in fact have two different sourdough cultures to experiment with to my heart’s delight, where as pets, they hardly take any time looking after at all.