Mushroom crepes, it all begins with a béchamel 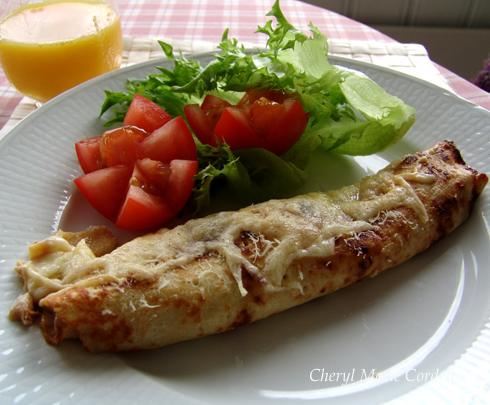 The kitchen wafted with the smell of crepes frying in butter, and I couldn’t help but linger to watch, as the ladel, filled with a generous helping of light yellow batter was distributed evenly over the black enamelled surface of the cast iron pan; the batter, to cook but a few minutes on each side.

The Chef was making, Swedish crepes.

Swedish crepes? I enquired, as they looked rather French to me. And there I was told that, well, perhaps there was not much difference in recipe, except that this specific recipe was handed down from a line of great Swedish Chefs – great grandfather to grandfather, grandfather to father and then father to son. The key to making these crepes, was to make the batter so thin, that you wouldn’t think it could hold together.

There was a round of bemused expressions in the kitchen, but the efforts proved original enough. And they tasted good, whether eaten with homemade strawberry jam or with ice-cream wrapped inside. 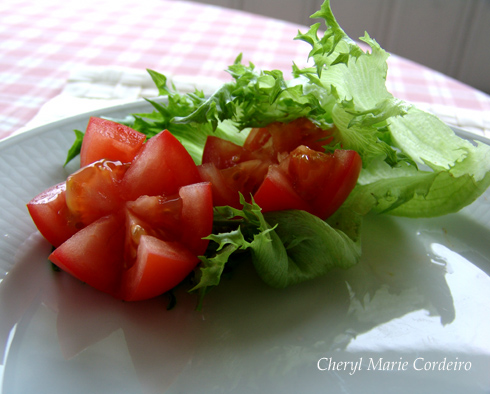 Star-cut tomatoes on a bed of lettuce.

In this instance though, the crepes were meant to wrap a concoction of mushroom in a béchamel sauce, then topped with grated parmesan cheese, and baked to a crusted golden brown. The perfect sides to the mushroom crepes? Fresh greens. We had ripened tomatoes and lettuce. 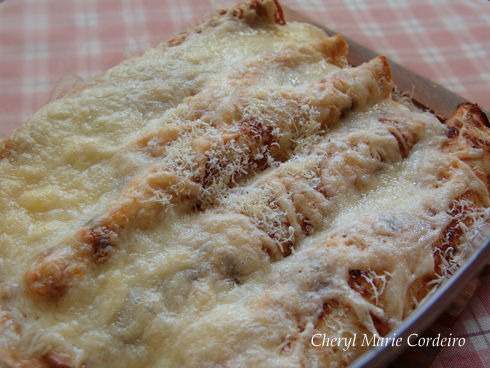 Mushroom crepes, just out of the oven.

The key to good mushroom crepes, I was told, is the béchamel sauce. Now, the béchamel sauce, is no escaping, French. For a richer version of this recipe, one could also put together a Mornay sauce, which is béchamel with cheese.

To make a béchamel sauce from scratch doesn’t take much time at all. Simply whisk some kneaded flour-butter mixture into warm milk, regulating the thickness of the sauce with the ratio of flour to milk, add salt and pepper. Add mushrooms to the white sauce, and wrap in Swedish crepes. Sprinkle with shredded hard cheese, parmaggiano preferred, and a quick visit in a hot oven, and that would be it.