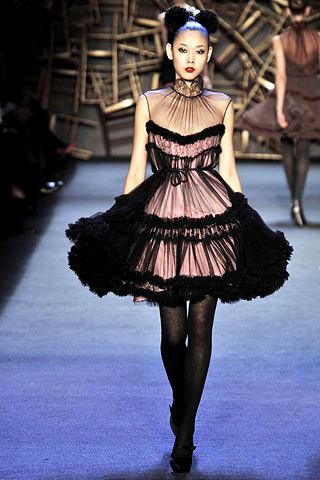 I’m constantly amazed at the speed of which the fashion world moves. Look away for just about a month and it seems like I’ve skipped two seasons in fashion.

Zac Posen might not have received too positive a review from Nicole Phelps for his Fall RTW 2008 collection but his lolitaesque collection arrowed my heart in an instant! 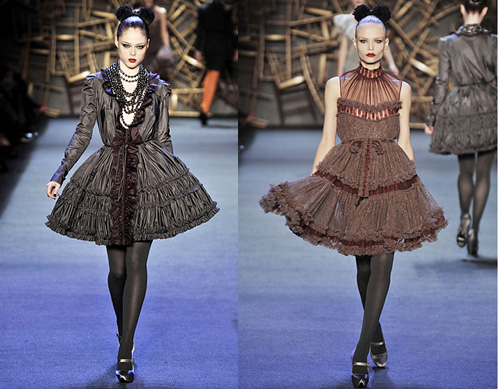 The collection was a mixture of grown-up playful and sexy. Tight chignons that visually cued French elegance and mistress discipline / strictness coupled and juxtaposed with pom poms that could well cue Minnie Mouse. It is this very essence of extreme qualities and the pulling together of two very different characteristics that intrigue. 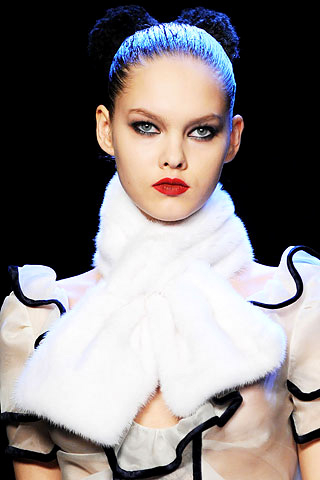 I’m glad to see more of such creations on the runway for the upcoming Fall and that girly dresses are still very much an influence and in vogue. Crinolines aside, I have in the past few months, witnessed many women in Singapore and Thailand wear frilly, almost doll-like clothes as everyday work wear. A sheer and frilly top with a high collar, coupled with a skintight pencil skirt makes a statement work outfit for the the career woman in Asia. Nobody seems to think twice about such doll-like dressing.

In Asia, there also doesn’t seem to exist a subculture of ‘cosplay’ or ‘lolita’ dressing as one might observe in Europe. It rather more seems that lolita dressing, and a large part of lolita behaviour, make the dominant female culture. Even the most homely of women rowing their wooden sampans in Thailand came across as playful, coy and understated sexy.

If Zac Posen’s creations for this fall seem too ebullient, I say – bring it on! Because what is fashion if not for their creators’ ebullience?