Geisha and Japanese architecture on the runways 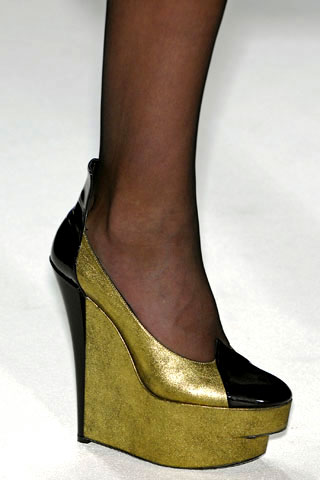 Sarah Mower’s words, “…otherwise it’s lumpy going” about Louis Vuitton’s Fall RTW 2008 collection, echoed in my head when I perused the shoes that Marc Jacobs had come up with for the runway show. One can always trust Marc Jacobs to be on the innovative front and I mostly celebrate crazy innovative, but here I could mostly only gawk in flabbergast at this runway collection of shoes.

For one thing, I thought lower heeled shoes were the way to go, after previous seasons of skyscraper platforms such as YSL’s Tribute, Louboutin’s Declic and most of Gianmarco Lorenzi’s super platform boots / shoes with 14 cm heels. I was wrong.

In a very loose way, the LV skyscraper platforms for Fall RTW 2008, reminded me of the shoes that Geishas would wear, only more western fashionable. A pinnacle example of Geisha shoes would be the pair Zhang Ziyi was given to don in character as Sayuri in the movie, Memoirs of a Geisha (Columbia Pictures, 2005). 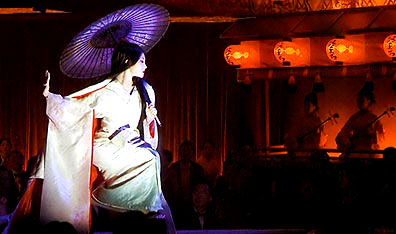 The thought of Geisha on the runways, like John Galliano for Christian Dior, Spring CTR 2007, made me relax some about Vuitton’s take on shoes for Fall RTW 2008. Less perplexed, I began to see Vuitton’s Fall RTW 2008 collection in Coco Chanel’s words, “Fashion is architecture: it is a matter of proportions.” And I thought John Galliano did it just brilliantly in Spring CTR 2007. 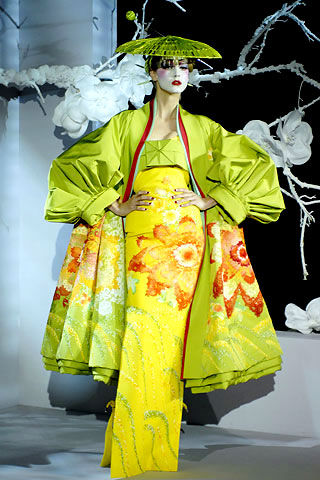 But why “lumpy going”? From the outlook of Style.com’s pictures of LV’s Fall RTW 2008 collection, I thought Marc Jacobs did brilliantly on proportions, even with exaggerated hip curves on elongated silhouettes. But viewing Louis Vuitton’s Fall RTW 2008 video of the runway show, lent a different perspective.

One can bring Geisha onto the runway, but to have Geisha on the runway is a different matter. So far from the models looking elegant in movement, the shoes needed training and a conscious effort in wearing. Restricted movements of some of Vuitton’s outfits paralleled that of Kimonos, and uncertain steps were the norm for the models at the Vuitton Fall RTW 2008 show. The overall impression was that the models lacked their usual quality poise and confidence in those shoes. So lumpy going, it was.

Hanami Web, has an interesting page on Kimono and how a Geisha would wear hers different from a Japanese woman who was not Geisha.