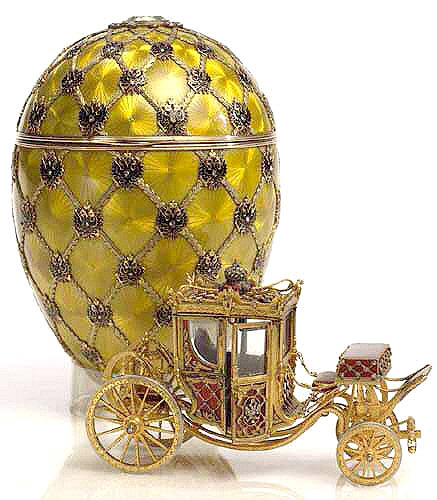 The Coronation Egg, by Karl Fabergé, 1897

As a child, I remember having loads of fun painting Easter eggs. This activity was often followed by Easter egg hunts in the school gardens.

This Easter, I have on my mind a different kind of egg, one that is a little more luxurious and most impossible to find at an Easter egg hunt – the Fabergé Coronation Egg from 1897, which is one of my favourites of the 56 produced by Fabergé from 1885 to 1917. 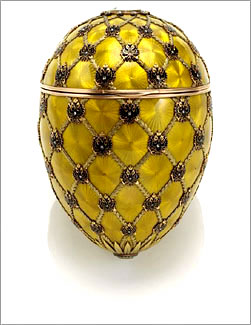 Glowing a golden yellow with red accents, this imperial masterpiece of what I would call jewellery, was crafted by Michael Perchin of the Fabergé House. Measuring 12.7 cm or 5″, it showcases some of the most intricate trellis-work cage around the outer shell. Each intersection is mounted by a gold Imperial double-headed black enameled eagle, set with a rose cut diamond. 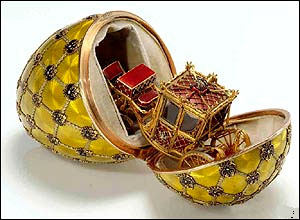 The exact replica of the Imperial coach used in 1896 at the Coronation of Nicholas II and Alexandra in Moscow.

Within its shell is an exact replica of the Imperial coach used in 1896 at the Coronation of Nicholas II and Alexandra in Moscow. The coach, made in yellow gold and red translucent enamel, features an Imperial Crown in rose cut diamonds and six double-headed eagles on its roof. The windows of the coach are made of rock crystal and its tyres are in gleaming platinum. On each door is an Imperial eagle with diamond-set trellises in gold. It measures 9.4 cm or 3,7″ in length.

This egg was presented by Czar Nicholas II to Czarina Alexandra Fyodorovna in 1897 and today it belongs in the Svyaz’ Vremyon Fund, the Viktor Vekselberg collection in Moscow.