Miss Landmine in Angola: demonstrating the heart and soul of beauty pageants 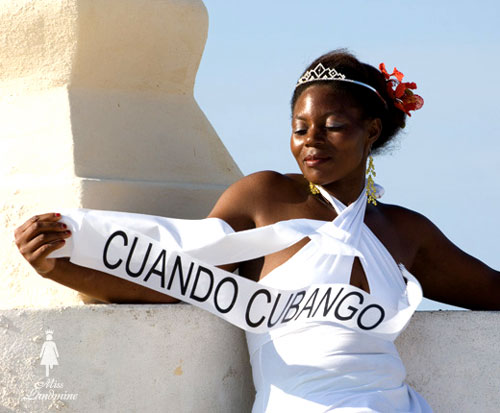 A world event of sorts is today held in the capital of the war torn country of Angola. The initiative to hold a beauty pageant for land mine victims in Angola, was taken by Norwegian artist Morten Traavik who whilst visiting Angola noticed two things – the abundance of one legged and crippled people about and the population’s great interest in beauty pageants.

In a stroke of genius he decided to launch a beauty contest for land mine survivors in an effort to raise consciousness to the victims’ plight and to lend them a voice. Viewers will know these women, what they do for work, when their land mine accident occurred, in which country the land mine was manufactured and the actual cost of the mines, which is in general about 10-15 Euro.

I’ve often been asked, “What makes a beauty pageant different from Top Model or other modeling events?” The Miss Landmine Survivor in my view, represents the pure essence of beauty pageants. From my personal experience in the Miss Universe 1999 pageant, beauty pageants are much more politically grounded and oriented. There is a humanitarian cause behind it and without that, the concept of the pageant as such would die. Beauty as such, is subjective and a film that is laid across what lies behind the pageant, which is often a political purpose of a consciousness raising sort.

The point with this pageant in Angola as I see it, is that it demonstrates the political power of beauty pageants all over the world, where a minority group of persons and considerably silenced group of persons can speak out, get heard, be seen and get help where they need it. How else would a group of eighteen land mine victims in Angola otherwise have obtained the opportunity to have their say about the horrors of the civilian victims of war?

I see beauty pageants as pro-women, though I concede that it depends on how the organizers of the pageant present the delegates and in what light they do so. In my view, by and large, the stage, the limelight, the attention, will tutor and coach women in self-presentation and give them the skills, the self-confidence to be heard beyond and after the stage lights have dimmed and the media frenzy has died.

The voices who try to silence, criticize and bring down the voices who try to seek to be heard in pageants, are themselves an oppressor of sorts. I only wish there were more ways to raise consciousness on the plights of men around the world too, whether land mine victims themselves or men who are abused, as Michael Kimmel and Michael Messner would discuss on “Men’s Movement”.

The crowning of Miss Landmine Survivor is today, you can visit their website and vote for the winner.