One of the more refreshing of drinks available in the city of Istanbul, is freshly squeezed orange juice you can easily find along the streets.
Text & Photo © JE Nilsson, CM Cordeiro 2013

The days in Istanbul found me drawn to the various available street foods the city had to offer, despite being warned by some local friends to not eat street food:

“And what is that? Roasted chestnuts?” I asked in enthusiasm.
“Yes. But that – you do not want to eat that.”
“And how about those breads? They look good.”
“That – is something you can buy also in the cafés. Go there instead. Not the street vendors. They are completely not healthy!”

Still, when alone, I couldn’t help but exchange coin for bread or coin for boiled corn whilst roaming the cobbled streets of this historically rich city. 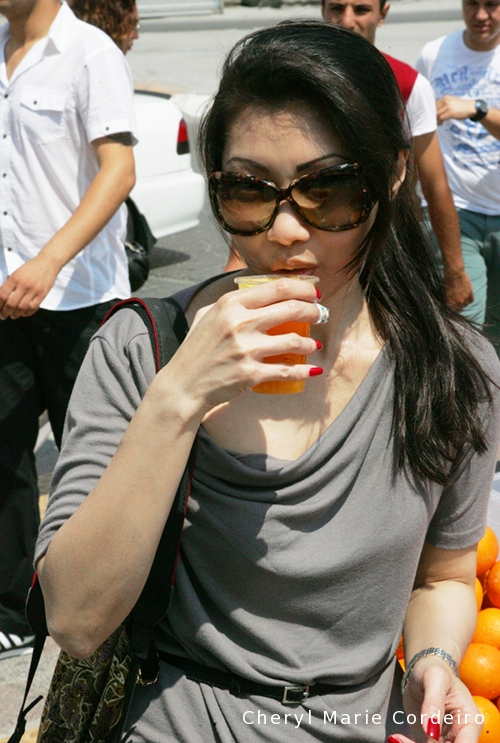 The freshly squeezed orange juice was so good, I contemplated lugging home one of their larger sized traditional citrus presses, for the authentic feel of Istanbul right in Sweden.

More than once, I found myself buying a ring of sesame encrusted Simit, even if it was the aroma of it that lured me to having one in hand whilst walking. With a bag over the shoulder and a camera in the other hand, an added ring of Simit to hold left me no practical way to manage further purchases, which I thought was perhaps as good a strategy as any other negotiating techniques when maneuvering through the market streets. Bread is a fundamental staple for the people in Turkey. Inexpensive and filling, the importance of bread continues to be reflected in the Turkish language, where the phrase “ekmek parası” is applied to daily bread as earnings. One of these in hand makes the perfect companion when navigating the small and winding side streets of the city’s innumerable markets.

Having now had more than a few Simits, which is but one of Turkey’s more than a dozen types of traditional breads, I found that even this bread has its variations within Istanbul from baker to baker, some being smaller, crisper and more chewy in texture than others. I figured if I stayed longer in this city, I might well find myself with a list of favourite Simit sellers, ones that I will return to over and over again, to get exactly the type of Simit that I wanted. 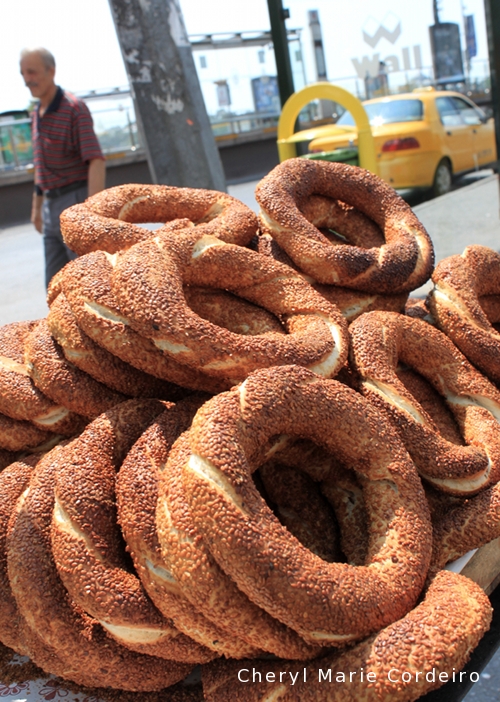 With numerous places to buy Simit, I can see how after awhile, you might end up with a handful of favourite Simit sellers, since these come in their own variations from baker to baker. Peeled and cored apples. After encountering this seller who seemed to have a constant stream of local customers, I chanced upon a similar apple peeler from a wholesaler just a couple of streets down the road and thought, now that’s a business idea…

What is perhaps more enticing than chasing down your favourite street vendors for that perfect culinary treat, is to eat seated along the streets of this city. And this I had many opportunities to do with one of the more memorable being sitting along the waterfront of the Golden Horn, dining on the fresh catch of fish and seafood of the day in Karaköy. Walking down from Galata Kulesi sokak in the general direction of Eminönü and Sultanahmet in the far distance, just before hitting the Galata Bridge, you’ll find nested to the corner of the bridge tucked away almost out of sight, a short street of fish vendors together with some stalls that will readily serve up the day’s catch in a variety of dishes.

It was here at the Galata Bridge fish market that I could say I had one of the more splendid piscatorial meals in the city. 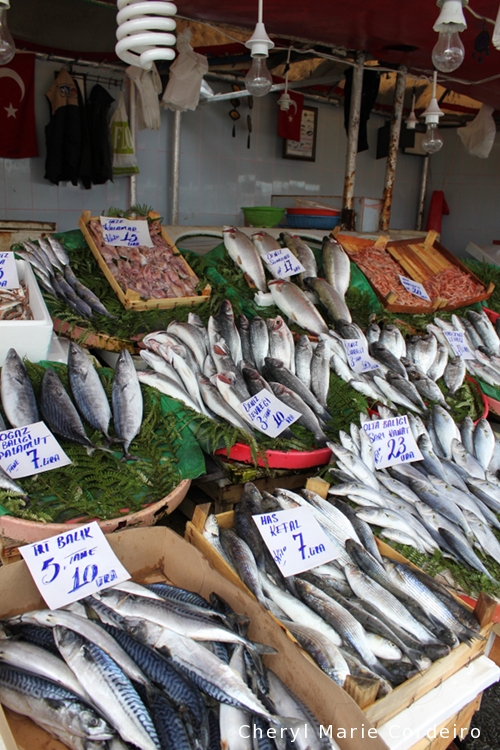 The day’s catch. This fish market is a good resource for seasonal varieties of fish and seafood. 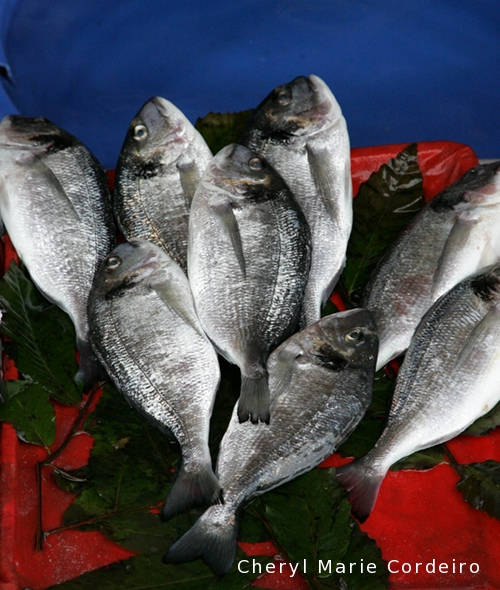 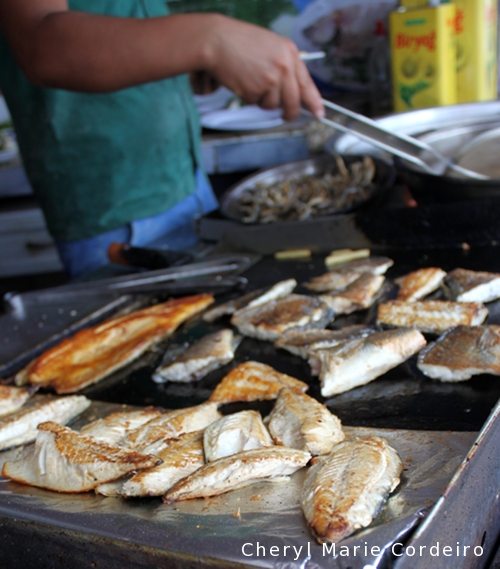 Grilled and lightly pan-fried by the waters of the Golden Horn. 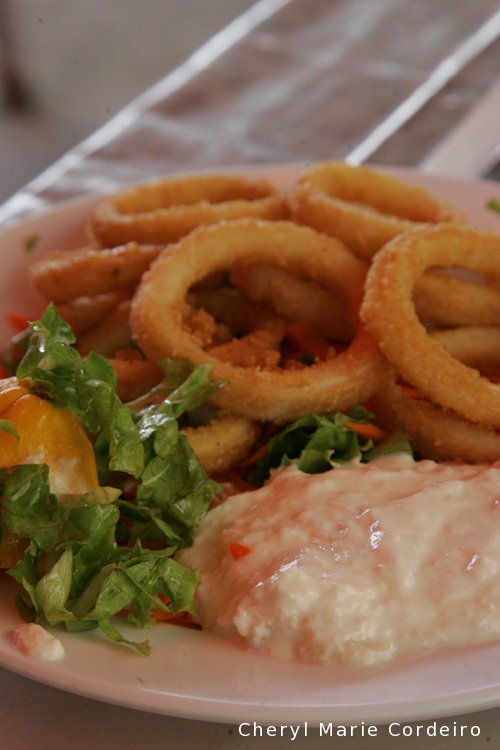 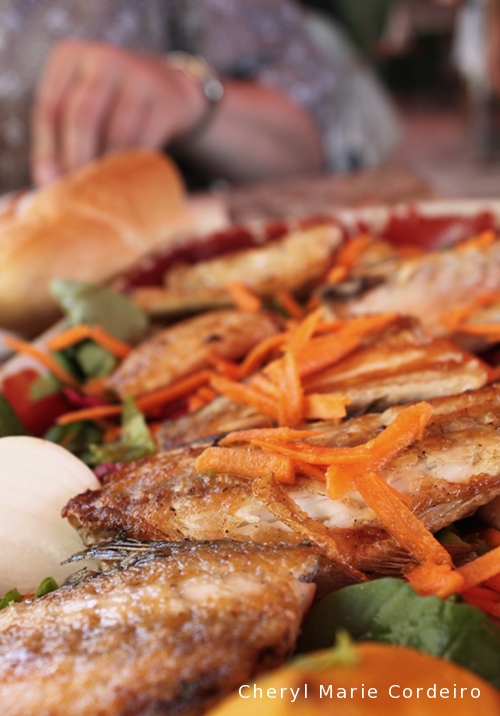 Seabass, that makes for perfect grilling. In this instance, it was served lightly spiced, with a pinch of salt on a bed of lettuce and shredded carrots.

This small street has certainly seen more people than when these pictures were taken. To some extent the lack of people might have been due to the light afternoon showers or that my visit there was made during off-peak marketing hours. Either way, I found the setting quiet, calm and perfectly conducive to exchange talk with the stall vendors.

I’m often amazed at how transactions cut across language barriers and where language is inadequate, the meaning and intent of commerce / trade still manages to ring clear through.

“I need your money and business, which is why I can only afford to offer you the best catch we have”, they reasoned with us when offering an overly large seabass for the grilling and serving to just two persons.

We looked at the suggested catch of the day and took what was said in all earnestness. Given time, we might work out a better deal, but in this brief stay, seduced by the warm breezes of the Golden Horn and the light blanketing of grey skies in the usually scorching heat of a city that is set as a gemstone between the continents of Europe and Asia, we settled for what was suggested.

As it turned out, the fish was pan-fried to perfection, the calamari, scrumptious.

It ended up too, that I asked for the stall’s recipe of their tarator sosu that accompanied their kalama tava. A slightly humourous, halting conversation with much gestures as to what went into the making of their sauce ensued.

So, head for the street foods or sit and eat by the streets, alongside the waterfront when in Istanbul?

Yes, absolutely. Why not?