A cheese and wine dining 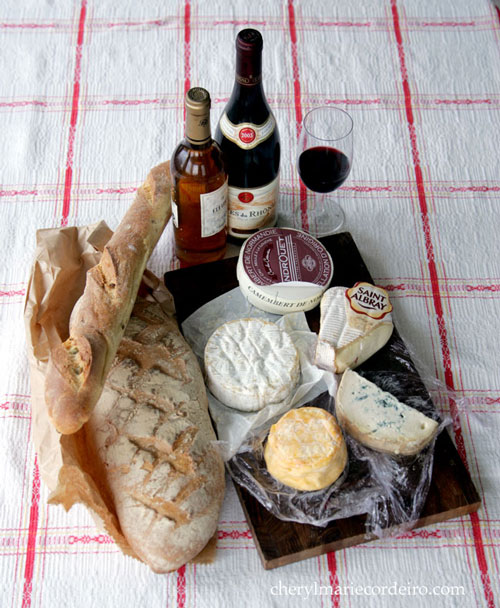 A selection of wine and cheese with bread

I think Asians generally have a different socialization towards diary products than Europeans – we just don’t consume diary products all that much. My idea of cheese when growing up in Singapore was hard Cheddar or pre-packed sliced cheese, the kind you toast on bread and little cubed cheese in various flavours, which I liked very much.

I also think my encounters with milk and cheese would be more numerous than my classmates’ experiences since most of their lunches as I recall consisted of spam and bread, hard boiled eggs and baked beans and Bovril sandwiches as the most mainstream.

All that changed when I arrived in Sweden, when the world of diary products exploded into my realm of being. I was absolutely delighted to explore, of course! 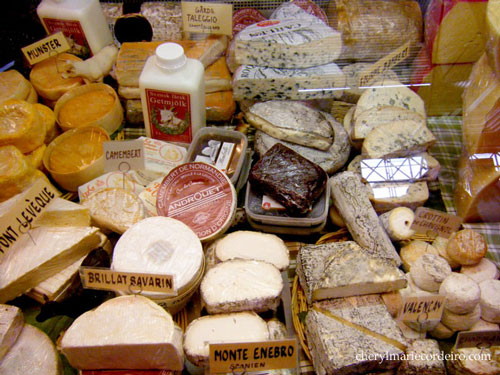 A variety of cheeses at Saluhallarna, a dry market of sorts in Sweden.

France and Italy each produce over 400 types of cheese (this information was also cited in the movie, French Kiss (1995) with Meg Ryan and Kevin Kline), some varieties of which can be found in the Swedish supermarkets. This mean that one could have one different type of cheese per day, everyday for over a year! And I thought the Singapore hawker-center delights were unbeatable in the aspect of variety!

Personally, I’m inclined to like French cheeses and although not a cheese connoisseur, I do have some favourites that include, Camembert de Normandie, which dates back to the 18th century and has a light salty taste with a creamy texture, this cheese gets creamer, the longer it keeps, say over 2-3 weeks; Saint Albry, tagged in the first picture above, this cheese also gets creamier with keeping, the skin being just very slightly bitter; Roquefort, which to me is beyond fantastic a blue cheese! A delicacy made from ewe milk, the taste is pungent and is a cheese not for the faint hearted; and Munster, which is also pictured above, is dark yellow, creamy cheese with a pungent flavour. Munster is apparently best served with dark bread and beer.

I also tend to associate the liking of cheese with durians, the pungent King of Fruits that put off most Europeans when travelling in Singapore, Malaysia or Thailand. The Thai variety being very different from the Malaysian variety. Thing is, if you love cheese, you might wish to have a go at durians and vice versa, for those in Asia who like durians, you may wish to have a go at cheese when in Europe.

One thought on “A cheese and wine dining”

Life speeds up when you slow down