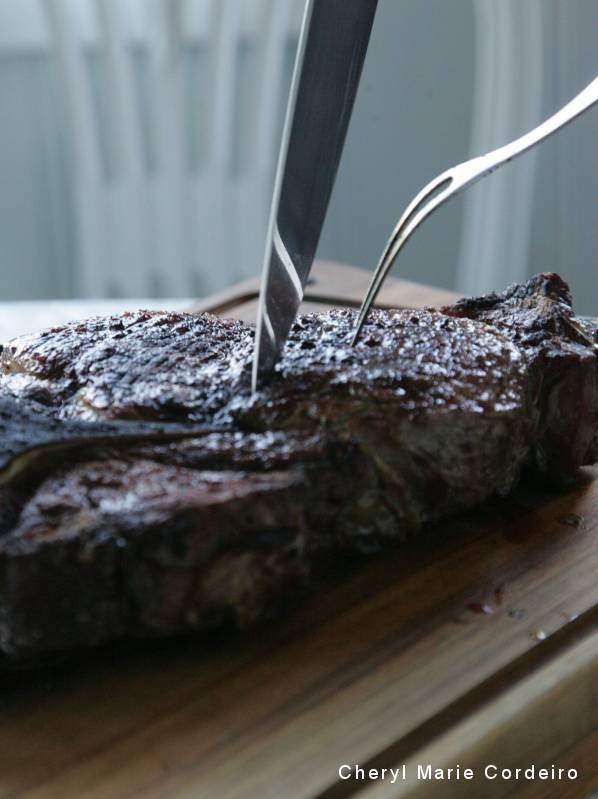 Personally I would leave the steak some eight minutes before serving to let it rest a bit and even out the temperature. I have found that this leaves the steak much juicier too.
Text & Photo © JE Nilsson, CM Cordeiro 2013

Admittedly, it was a feeling of pure lust that washed over me from the moment the succulence of it appeared under my visual radar. I wanted it. I knew from the first instance I saw it, it was mine. Without a doubt, I wanted all of its deliciousness home with me.

It was not so much a question about how many inches of it I could have, but the fact that already the first two would give me a really nice piece, with both strip steak side and the tenderloin.

I really don’t know what it is with big chunks of beef that releases so much of the primitive hormones in me, but it seems the case that I often end up buying way too large steaks to a small household. Perhaps I just like large, in general, like fruits, diamonds, cars, houses. Anything.

However, there is no way any one single person can down a four lbs (2kg) T-bone steak alone. Not even two grown up persons can do it comfortably. With some modest side dishes, you need to be at least four.

And there you have it, a perfect reason to call a few friends and throw a dinner party.

I have always also felt a little bit intimidated by outdoor barbecuing, because it seems so hard to get any steak exactly the way you want it. Too many burst and charred tomatoes, too many raw and inedible chicken parts etc. have left their scars on my self confidence I’m afraid, but this would be the day, with a gorgeous find of a T-bone.

After considering a Barolo, my choice fell on a full bodied 2001 Rioja which worked out well.

When planning a dinner, I like to choose a wine that will complement the food, as soon as the menu is settled. In this case I felt a steak this brutal, would take a robust, mature red wine that would stand its own ground and not fade into the wallpaper when a medium rare two inch thick steak landed on the plate.

My rule of thumb when preparing a meat dinner, is one glass in the sauce and one in the chef. In this case I was not planning to have any sauce, so I recalibrated the wine ratio, which also worked out OK. 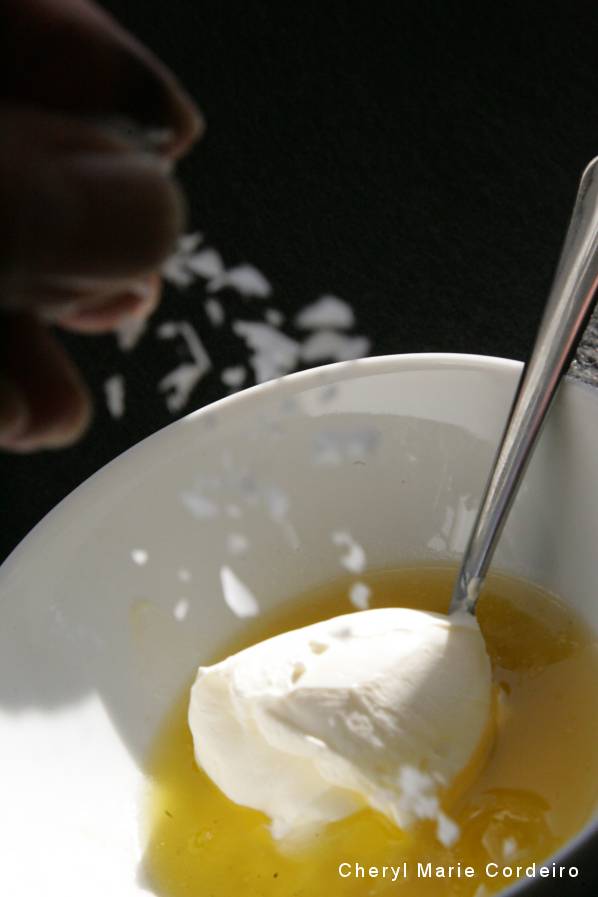 For the baked sweet potatoes I made a dressing / dip sauce consisting of equal part melted butter and crème fraîche, stirred together with some lightly crushed salt flakes. When the butter cools down this sauce will be stiff enough to scoop out with a spoon and melt right back to flavoured butter when added on the baked sweet potato. 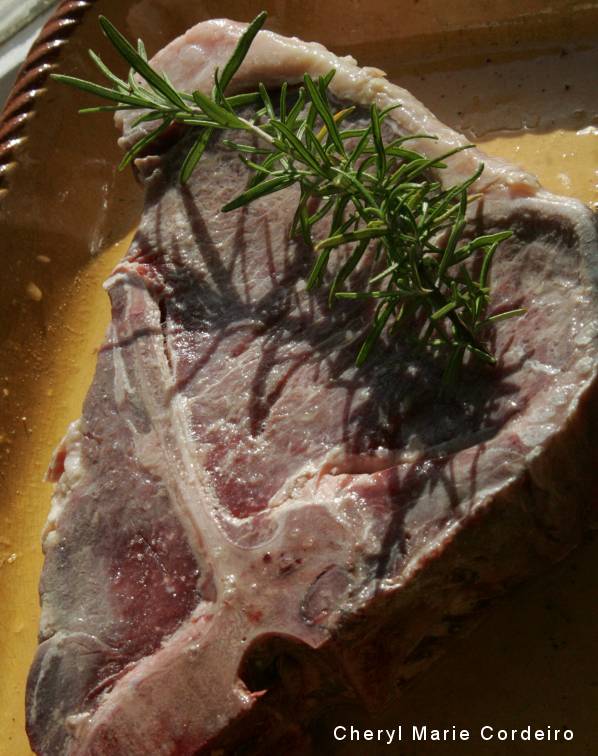 A four pound / two inch / 2 kg T-bone or porterhouse steak will take three, maybe four really big and hungry guys to finish together with one baked sweet potato each and some wine.

Personally I will marinate a steak like this in half a tbs of salt and the juice from half a lemon, together with a generous dash of ground black pepper, for about 30-50 minutes. Not more and not less. The reason is that during this time the steak will pull the salt in without making it dry. You don’t need to take my word for that this works, I mention it here just to share how I do it. A drizzle of a quality olive oil on the steak when it is done might also be a very nice touch to some. 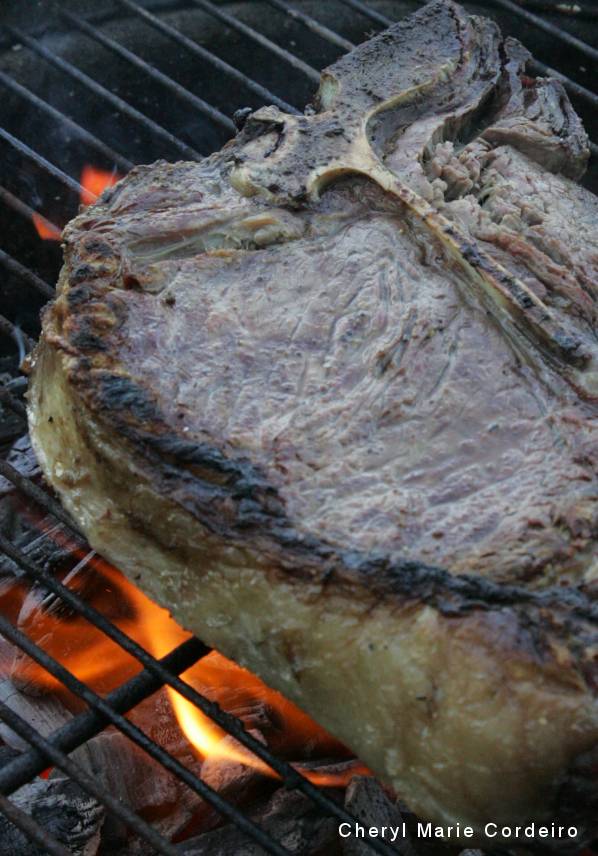 Grill the steak first on one side for 10-12 minutes, then flip it and give it another 10-12 minutes. It’s not a good idea to flip it back and forth since this will dry out the steak. Have faith and go with the force.

A two inch steak will need 10 minutes on each side, 15-20 cm from the surface of briskly glowing charcoal, to come out rare. Medium rare might take 12 minutes on each side. If you give it more than 15 minutes on each side you might well have killed it. Good meat is full of juice and will take some heat to get it cooked. For outdoor barbecuing it is a good thing if there is a slight breeze that keeps the grill going. The heat needs to be intense. 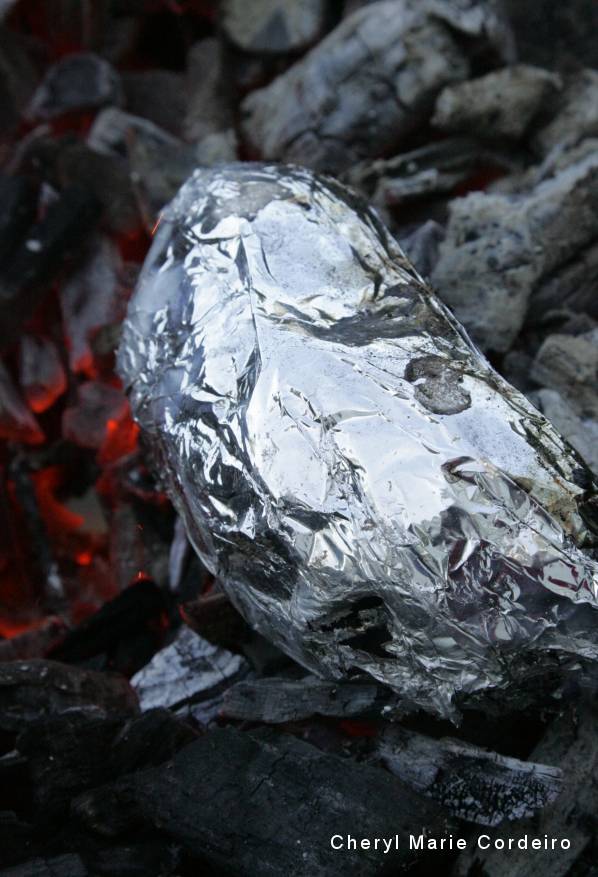 To bake sweet potatoes, I rinsed in water and wrapped each of them in several layers of oven grade aluminum foil, and then sat them half buried by the charcoal in the barbecue pit. Consider about 40-50 minutes for them to be done. 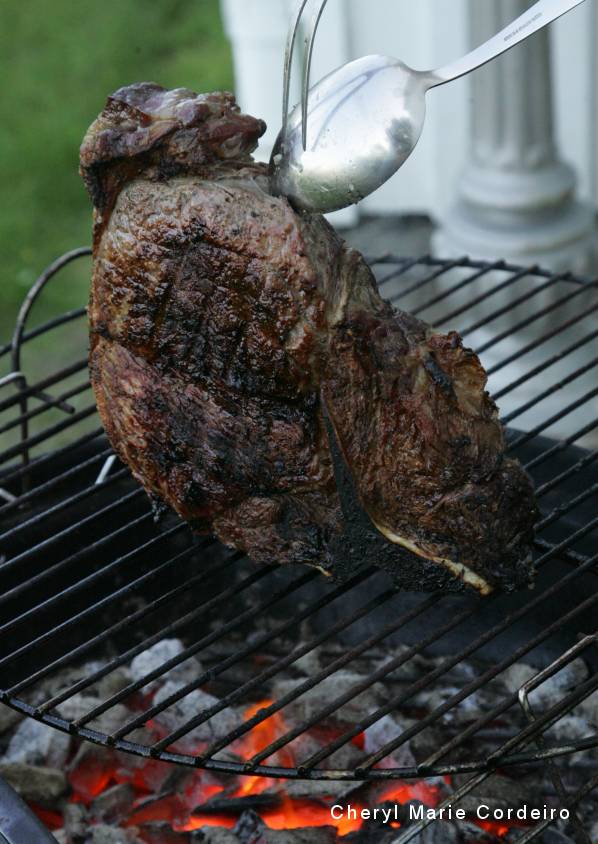 The bone will protect the meat close to it from being as done as the outer sides. Consider giving the bone side maybe up to five extra minutes. It’s extremely hot to hold it in an upright position. 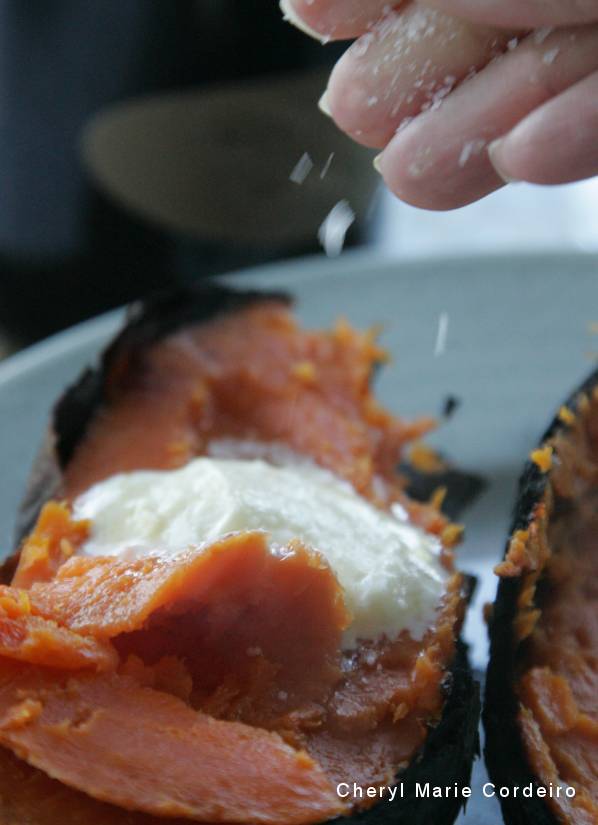 Some extra salt on the butter cream might be nice. 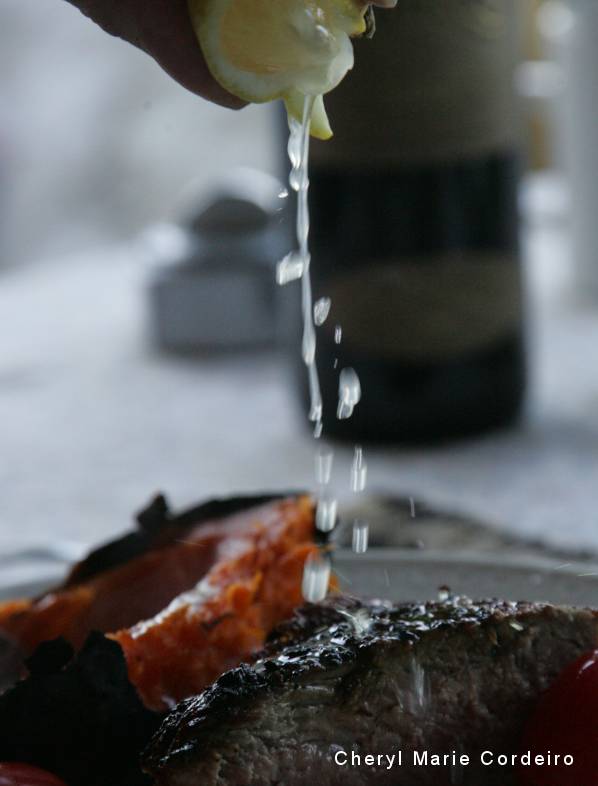 For serving, I used some lemon and black pepper.

After a solid dinner like this, don’t expect any more action that evening, other than finishing off the wine, happy smiles and a coffee.