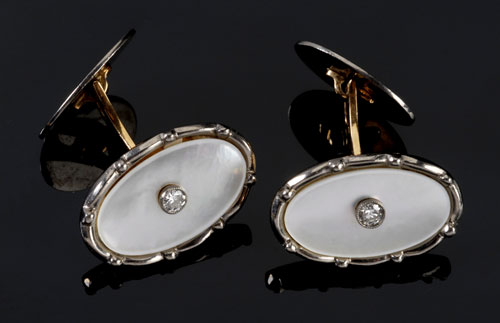 Cufflinks in gold and white gold, set with mother of pearl and 2 brilliant cut diamonds, c. 0.10 cts. Stamped GD & Co (G Dahlgren & Co.), Malmö 1940, Sweden. These are to be auctioned this coming weekend, at W.A. Bolin.

In a crowded room to any formal event, one could well sweep over the hall and indulge in the general sight of people well dressed. But as the evening draws on and conversations are engaged, it is most often that one cannot help but notice details in a person’s dress. Women for example, might notice details in men’s dressing such as the colour of his tie as in contrast to his shirt, the cut of his jacket or the pockets on his coat, his tie pin if he’s wearing one and then most interestingly, his cufflinks. Every bit of clothing on a person contains information about personality, and a pair of cufflinks might just well tell if he has a sense of humour. 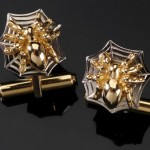 Made in all sorts of material, from gold, silver, to glass and fabric, cufflinks are one of the few details on a man’s dress that can make or break the look for the occasion. Bernhard Roetzel in his book Gentleman: A Timeless Fashion (1999) wrote that the wrong sort of cufflinks or a pair of fine cufflinks to an inappropriate occasion, can ruin a whole outfit. 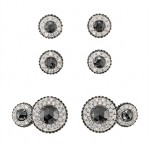 A signed coloured diamond and diamond dress set by Margherita Burgener. To be auctioned at Christie’s, Sale 7664, 29 April 2008.

Bonds the Jewellers lends a brilliant history of cufflinks, where in brief, cufflinks as we know them today, were worn in Europe from the 1600s onwards. By the 1700s when a faiblesse for precious gemstones swept Europe, cufflink designs began to twinkle and glisten in the same light. But it was really during the 1800s that cufflinks became seriously popular, when the fashion after the French Revolution took on a more sombre, darker and more elegant tone. Shirts could by then also be mass produced and by the end of the 1800s, tail coats and suits were born which made dress sets and cufflinks a nigh necessity for men’s dressing. 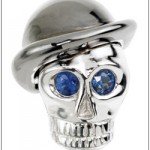 Longmire of London, is an English jeweller that is internationally famous for its largest selection of dress sets and cufflinks offers exquisitely crafted pieces, custom made or otherwise. Each piece is known for its sophistication in craftsmanship. Longmire’s pieces range from the enamelled to the more contemporary and modernist in design. One could visit their New Bond Street outlet for gem-set and more chimerical pieces, and their St. James’s outlet for their more traditional pieces and custom designed cufflinks.

It was shirts made during the 1970s with ready sewn cuff buttons that led to the swift and concise death of cufflinks as such. I suppose the hippie ideologies of the time didn’t sit too well with anything upper class of sorts. But since 2000 where even in Sweden, luxury and elegance was coming back to form in mass culture, Longmire’s director, Mark Johnstone has noted a marked or renewed interest in cufflinks (Rydin, 2007. Antik & Auktion nr 12:68).

On a personal note, I hope cufflinks are here to stay. With today’s funky designs from Paul Smith, Gucci and Thom Brown, I even start to think that cufflinks could well fit into more casual events. I’m almost hoping that guys would ditch their regular buttoned cuffed office shirts for ones that need cufflinks. There is hardly any accessorizing in terms of jewellery that is possible for a man as I see it, and these small little delights make excellent eye-candy, if the guy isn’t already one.

Eggshell blue and spring florals in a dress, Easter 2020