About an hour’s drive north of Gothenburg lies an old stone fortress called Carlstens Fortress. Huddled around its imposing stone wall is the old town of Marstand. The town is located on two islands, the one outermost and housing the fortress is called Marstandsön while the inner one is the Koön – the Cow’s island. 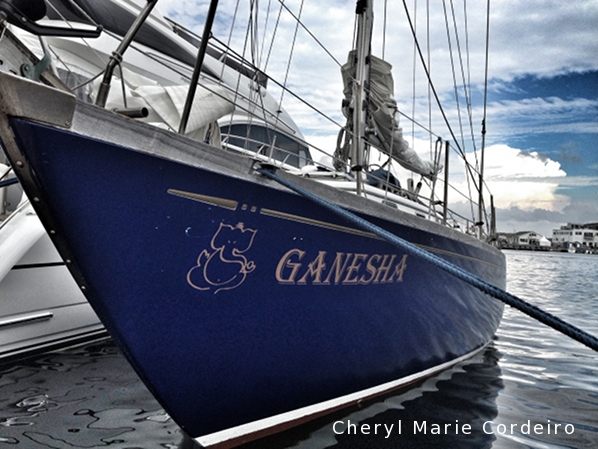 Ideally, one would arrive by boat to dock alongside other seafaring adventurers, a natural thing to do since during the summer, Marstrand hosts an endless number of sailing competitions. The winter season is somewhat of a lull while most activities try to hibernate the best they can. 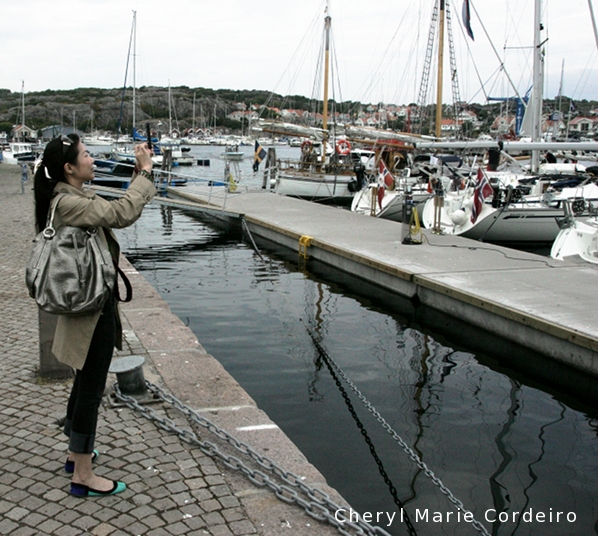 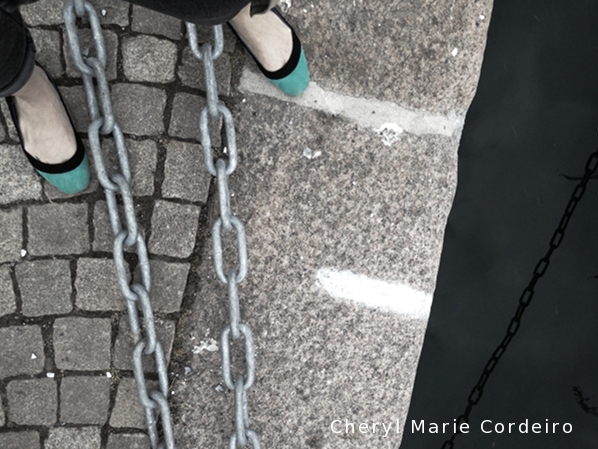 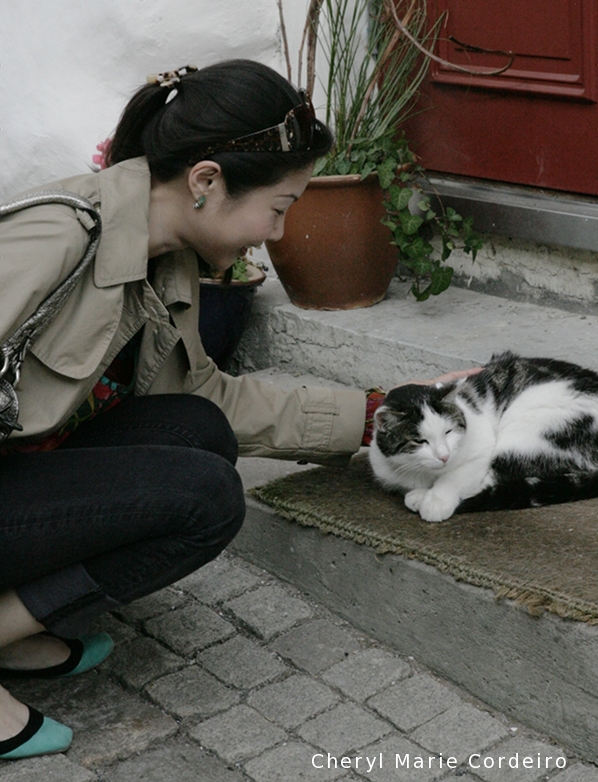 No cars are allowed on the streets and roads of this town, which makes the place very pet friendly.

The majority of houses are from the 19th century or older. Maybe about half of them are for summer use only, and as cultural heritage property kept as near original and authentic as possible. Along the waterfront are a row of cafés, restaurants and bars that serve Swedish west coast fare such as shellfish soups to sandwiches and various piscatorial dishes, choosing from shrimps, crayfish, haddock, plaice, dab, fresh or smoked mackerel to cod, a personal favourite of mine. 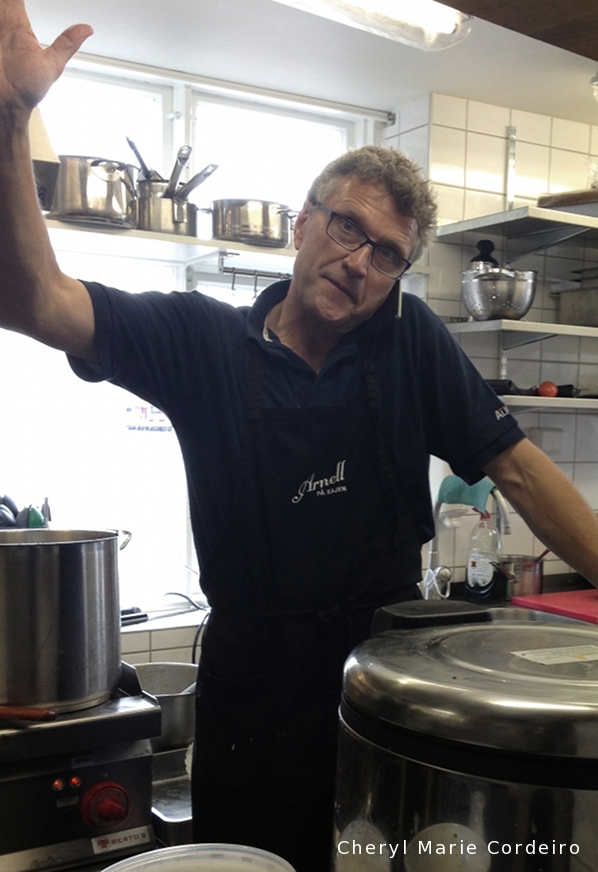 One of these charming quayside eateries is run by Chef and TV personality Anders Arnell.
Popping in to say hi, I found him personally cooking for his guests whilst busy on the phone at the same time. Summer is indeed high season here. The interior of Arnell på Kajen. Between 4 to 6 PM from Wednesdays to Saturdays during the summer months is “Crazy Afternoons: Oh du Milde” with a selection of finger foods and drinks. Old lighthouse building at the northern entrance of the well wind protected harbour of Marstrand.
Nowadays since long turned into a private summer house.

The waters outside of Marstrand are treacherous and unforgiving, and an irresistible challenge to sailing enthusiasts from the globe over that come here to train and compete in the many various regattas.

The weather can change from happy summer and sunlight to sail shredding storm in a matter of hours, while opposing currents make navigation a nightmare. Over the centuries many sailors have been saved by the massive stone barriers of the Marstrand island and fortress. Still around from an era long before Marstrand turned into a posh summer resort is this house, built to house both a small family and their cow. Originally the roof was covered with grass. Eventually the house has slid into a more comfy position over the centuries and the glass panes needed to be custom fit for the now no longer square window frames.

It takes a longer term view and probably a very solid financial basis not to tear away something old and original to turn it into something modern. Without this determined mindset, the Marstrand everybody loves today would not be here to visit. 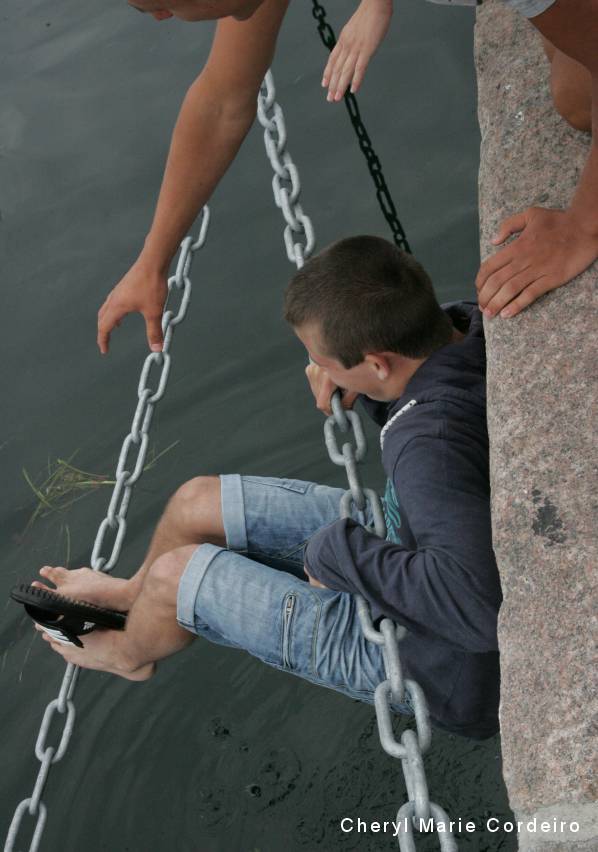 A brilliant slipper salvage by some youths who (just barely) made it without that involuntary summer bath in the sea. The nearby city of Kungälv formerly had a famous quarry for a particular kind of black slate that was popular for city sidewalks in the entire western Sweden. In most places this has by and by been replaced by other materials but here, it is still found.

This stone is found covering many old sidewalks here, dating back to the prosperous years of the late 19th century, when Marstrand rose to national fame and prestige as a Swedish Royal summer resort to foremost King Oscar II, who often anchored up outside here with his private yacht, the Drott, to spend time here playing tennis and relaxing. A local Swedish St Tropez if you will. The local architecture is a particular blend of stone fortress and late 19th century fishing village. The quayside is also lined with small boutiques featuring artistic creations and filled with a great love of animals in general. This shop that sold colourful knitwear had here, a bowl of water with a handwritten sign “for thirsty dogs”. Just across the street from this shop were two comfortable deck chairs placed on the public grass lawn, “for tired husbands”. “Spectacular boat! Brand new, eh?”
“Nja well, we’ve had it a few seasons. It sits in the living room during the winter months.”

Regardless of fashion and various trends, the seafaring history and nautical heritage remains ingrained in the character and vibes of Marstrand. Its face is forever turned out towards the sea. Along the quayside was thus this piece of boat builders pride, an absolutely new, traditional fisherman’s boat, a “snipa” in pristine condition, carefully set in its natural habitat, water. However, I can imagine that this particular example of a wooden boat builder’s efforts would live in the family living room during the winter. It is hard to think that in the 1950s, all boats around here looked like this.

Overall, Marstrand is one of the more interesting Swedish west coast destinations for a day trip from Gothenburg regardless of means of transportation as it hosts a multitude of water, nature, food, art and events related activities at least during the summer.

And when here, why not try a homemade Mazarin or two, after that perfectly wood fired oven roasted haddock? With a view overlooking the harbour, little could go wrong in this languid summer’s afternoon.