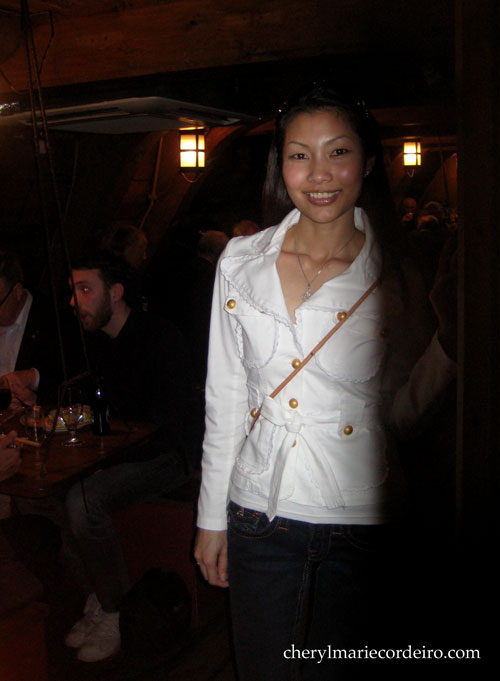 “You’ll be dinin’ with the captain.” – Pintel to Elizabeth in Pirates of the Caribbean: The Curse of the Black Pearl (2003) But unlike that scenario, I wasn’t disinclined to acquiesce to the Captain’s request.

Just noticed in DN that Gotheborg III was now visiting Stockholm. The reconstructed 18th century Swedish sailing Ship Götheborg III has made its trip to Canton in China, and back. It was time now to hold a final Board of Directors meeting to close the books on the entire adventure of building the replica ship and its sail to China and back. On the agenda was also the ship’s future adventures. Her upcoming Baltic Sea Tour 2008 looks to be enough of a challenge to keep even the most hard core sailing enthusiasts happy, but even so, it sounds a breeze and a walk in the park compared to the high sea sailing to China.

After the meeting, it was dinner onboard the East Indiaman Götheborg III. 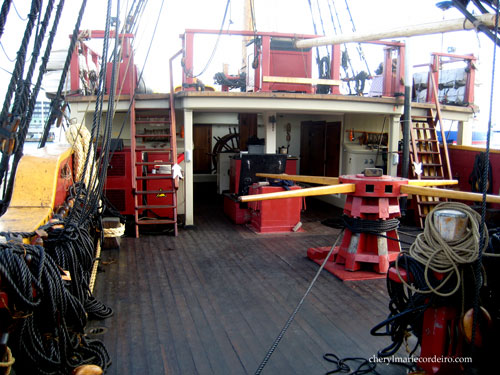 A view of the upper deck, spick and span with some of its rigging visible. Now is the time for upkeep. From the upper deck, we descended through a latch, down a ladder onto the cannon deck where dinner was served. 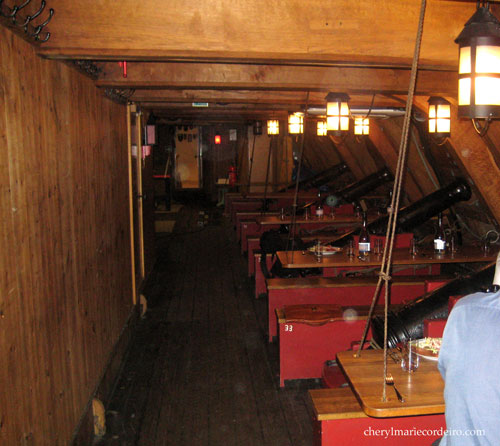 The cannon deck, laid out for dinner.

During the last voyage of the original Götheborg in 1743-45 she carried a total of 650 – 700 tons of precious trade cargo from China to Sweden, that included zinc and porcelain (both as much as ballast as pay cargo), some rattan and Mother of Pearl, some pepper, some silk and almost a whopping 400 tons of tea.

These East Indiamen sailed armed and well equipped for defense against pirates and I assume unscrupulous competitors. In-between the tables of this replica ship are 16 fully functioning 6 lbs cast iron cannons, each with a total weight of 700 kg. With a charge of 1.5 kg of black gunpowder they can punch a hole in most anything that floats. 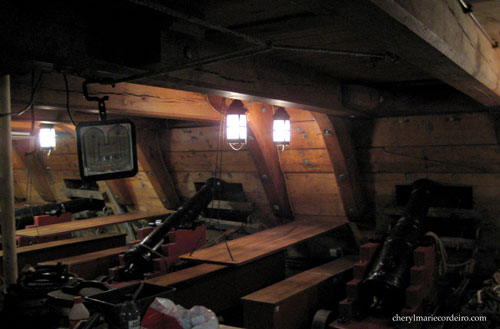 The other side of the cannon deck where dinner was not served.

Dinner was salmon, ham and different salads. Along the tables where originally the crew would have eaten sat today, men in dark suits together with sun toughened sailors whom to me, looked right out of 18th century with pig-tails and all.

I had the privilege of dining with those who in this project equaled the original Supracargoes. Just across me sat the lean and tanned Captain Peter Kaaling, with a gleaming gold hoop in one ear. The gold hoop coupled with his heavy shag gave the impression that he was more pirate than legit. But Peter is in real life, good hearted with an easy going nature. 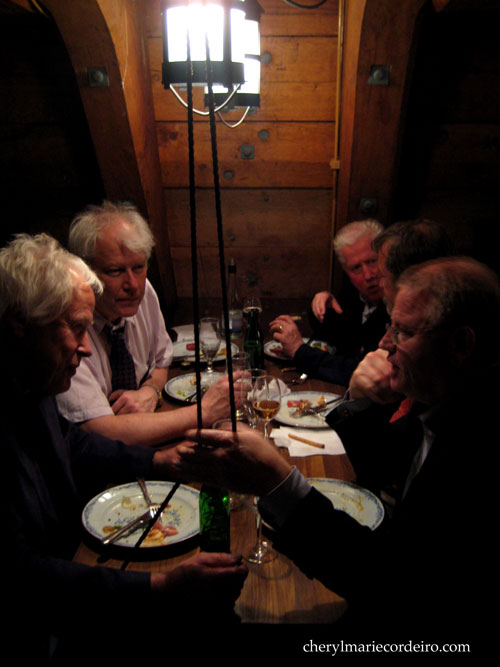 The Götheborg III ‘Supercargoes’ with their faces intent, seemingly planning their next haul or the battle strategy?

At the table in the picture above are two of the initial founders of the ship building project, Jan-Erik Nilsson (left of table in lilac linen shirt) and Anders Wästfeldt (right of picture, farthest end). Beside Anders and partially obscured from view is Captain Peter Kaaling (in red shirt). Nearest to the edge of the table is the Chairman of the foundation that now owns and runs the ship, County Deputy Governor Göran Bengtsson. To the left of the picture, nearest the edge is Ander’s brother (in navy shirt).

However exciting this trip in time and space was, I would have been a lousy sailor and would have definitely added to the negative connotations of having women onboard. Even at quayside the modest rocking of the ship made me sea-sick and unable to finish my meal. For some links to the writings of people more enthusiastic about sailing than I, try this:

One thought on “Dinner onboard the Swedish East Indiaman Götheborg III”