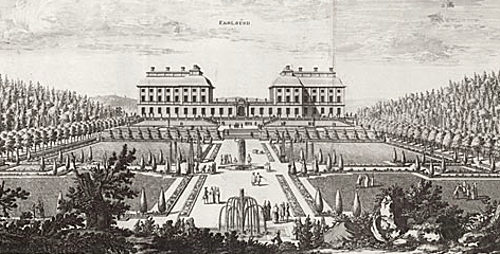 North of Stockholm sits a grand and picturesque castle that was the residence of Princess Sophia of Sweden from 1578-1611. It is today in fact the only privately owned Royal castle in Sweden. It has a rich history that is best associated with Sweden’s King Gustaf III and his young Danish consort Sophia Magdalena. They lived in the castle during the 1700s enjoying a mostly carefree and happy life. From the 1300s the castle belonged to a succession of Swedish royalty that included Gustav Vasa, John III, King Gustav II Adolf and HSH Hereditary Prince Frederick, who eventually became Frederick I of Sweden and reigned at the time of the foundation of the Swedish East India company (1731-1813) who had their first ship ever sailing to China named after him i.e. – Fredericus Rex Svecia.

In 1917 the castle was acquired by a Swedish industrialist who eventually took a great interest in Chinese porcelain collecting in a circle of friends that included the then reigning King Gustaf VI Adolf and the then young arts historian professor Bo Gyllensvärd. The castle and its substantial porcelain collection was subsequently inherited by his children in 1967. The family settled in the castle trying the best they could turning it into a home. Today, the castle has been passed on to new owners and theatrical performances, weddings and other large banquets continue to be held at the location.

The castle and its grounds, having seen its fair share of social parties and crowds moving through its rooms, reverberated such energies that waxed and waned with time of day and seasons of the year. As with most castle grounds in Sweden, as night falls, the silence that encompasses those grounds become so deafening that the drop of a pin on a polished tabletop might come as a relief. But the castle grounds were seldom quiet, especially at night.

A while back when the castle was still a home and its grandeur silently lingering in private hands, after a long day and night of pleasant conversation on our common interest in Chinese porcelain, the topic eventually ventured over into the supernatural and the possibilities of this huge building housing some uninvited guests. “Well not really”, the hostess answered, “we don’t really think of any of it much. It is just kind of part of the house but incidentally, I hosted you all on our guest floor and was just curious if any of you experienced anything unusual this night?”

The answers were a bland negative which left us all with the feeling that we had been cheated of some great fun. Further inquiries about what we had missed outlined that there were actually two disturbances, of which the first was more of an annoyance than the other, but one that our host and her husband had learnt to live with.

The general layout of the caste included a spacious living room, an entire floor dedicated to guest rooms, staff areas, a kitchen area that was strangely small and where we sat, a ballroom located in one of the wings that was by and large undecorated to be lit up and painted especially for the occasion when something important was to be celebrated, as for example Gustav III’s successful revolution in 1772. Now, the main bedroom for the owners just so happened to be near the ballroom, and after several times having been awakened by the noise and merry chatter from a boisterous ongoing spectacle in the ballroom just to have it all go silent when they eventually got around to lay a hand on the door handle leading into the room, the family half drowsy in sleep learned to just put a pillow over their head and commence sleeping, knowing that any protest would be futile and that the self invited guests would be gone without a trace in the morning anyway.

The second disturbance was a white clad woman that seemed to have taken a fancy of specifically the guest floor and appeared to float around there at occasion usually disturbing nobody. There were of course a few theories about who she was or more likely had been. There had actually been some really hard landscaping work being done with conscript labourers a few hundred years ago, and chances were that this woman had come to seek out some beloved one that had went missing in the process of building an artificial lake near the castle, but there was nothing in particular known. There was no getting rid of her and nobody had actually bumped into her long enough to inquire about her persistent presence.

Our curiosity was raised and our hostess confirmed that the lady in question had not been seen lately.

In year 1991 the 14th Dalai Lama, Tenzin Gyatso and his entourage were in Sweden to meet with Sweden’s Prime Minister Carl Bildt, and under the invite of the family, the Dalai Lama and his entourage visited and stayed at this castle. They were naturally hosted at the guest floor. Along with the Dalai Lama, the chief of staff supplied a long list of rules to the host on preferences and priorities where, on top of the list, was that no women under any circumstance would be allowed to visit their guest floor come whatever reason, hostess herself, employee or otherwise.

Night fell and after most guests had retired to their rooms after a long evening of mingle, entertainment and good food, a group of friends sat together in the kitchen enjoying a sip of white wine when suddenly, in a flurry of orange robes, down the secret service spiral staircase only used by employees of the castle grounds to access directly from the kitchen, all floors of the castle, came a monk bristling in a very un-Buddhistic manner – “I told you! NO WOMEN on the top floor! There are to be no women on our floor!” Our hostess had then calmly asked – “That sounds strange, it is pretty much only us here besides your group. What did she look like? – She was, in white …?”

Our friend and hostess thereafter explained that she had nodded emphatically, asked to have her sincere apologizes about this unthinkable faux pas forwarded to the Dalai Lama, and ensured the now slightly calmer monk that – she would very seriously look into this matter – whilst in private, not having much hope about any success, as that lady had been around since at least the time of Gustav Vasa.

“Sad”, our hostess said. “If they had got to talk some maybe we had finally got this whole matter out of the way once and for all. But now I assume she is still around. But none of you saw anything then?”