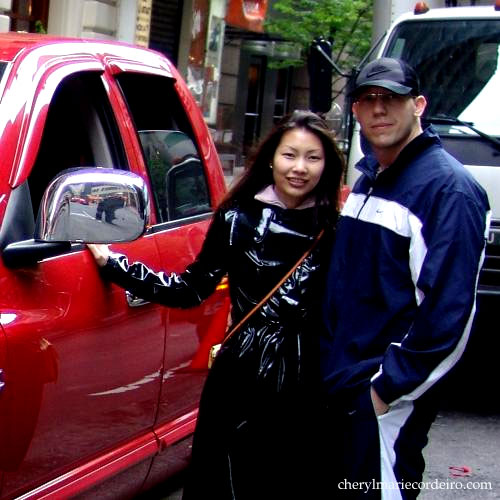 At around 07:30 hrs, Stephen Korte, myself and his Dodge

It was such dreary and cold weather to begin the day. Walking down the street half frozen and half awake, I expected nothing to happen, at least not before the first triple vente whole milk latte at the first Starbucks. And then I heard, an unexpected hip-hop beat in the far distance. At 07:30 hrs in the morning?

As I walked, the street beat got louder and louder. It was catchy. So catchy, I began to walk to the beat of the music, not caring if the DKNY black patent coat looked displaced in the hip hop genre. Perhaps it was a club that forgot to turn down their music from the previous night?

When the music got thunderous, rocking the very sidewalk, I discovered the source. No, it was not any of the downtown New York, East Village rock clubs having an unusual late night. CGBG is no more and this was actually Midtown.

Disbelieving my eyes, the source of this very funky music was a parked red truck. 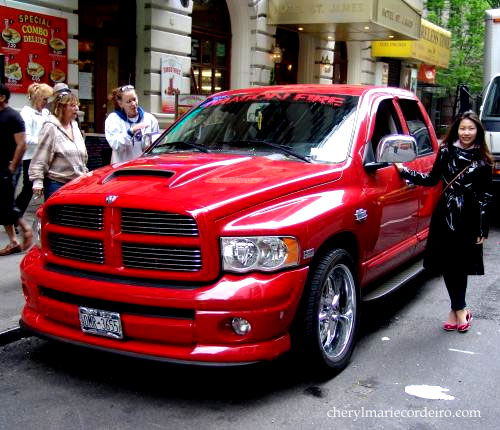 I was apparently, not the only person attracted to the gleaming Dodge HEMI Ram.

A gigantic red 5.7 liter HEMI powered Dodge Ram, bursting at the seams trying to hold into itself the most powerful base beat I’ve heard since Ministry of Sound’s main floor in Singapore. I could not just walk by, I had to look inside. The owner, Stephen Korte, was happy to help.

It turned out that Stephen loved his car, and he loved loud music. So he had the entire back seat hauled out and converted into an amplifier room, and he had half the front seat turned into a base supporting loudspeaker – and that one wasn’t even on, yet.

After apologizing for not having switched on the base loudspeaker, he flipped it on. And I had my head stuck into the back seat of the car when he did that.

I was literally blown away, the hair that fell around my shoulders began pounding with the beat of the base. It was fantastic!

When I backed off enough, I heard a flapping sound and wondered if that could possibly be my coat. But it was the tarpaulin covering the cargo space in the back of the truck that was vibrating. 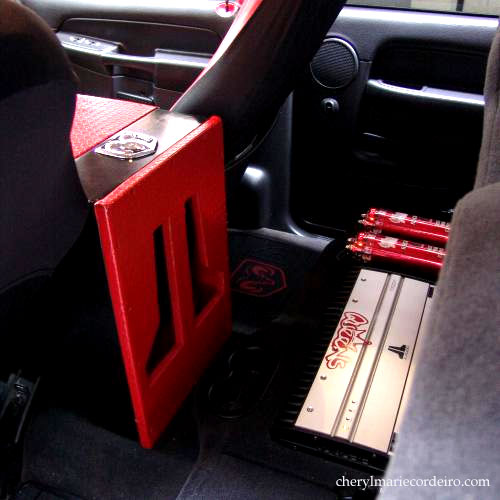 No hitchhiking. The base loudspeaker, with an inbuilt mini refrigerator, filled up half the front. The amplifier filled up most of the back seat.

Thank you Stephen, for sharing!