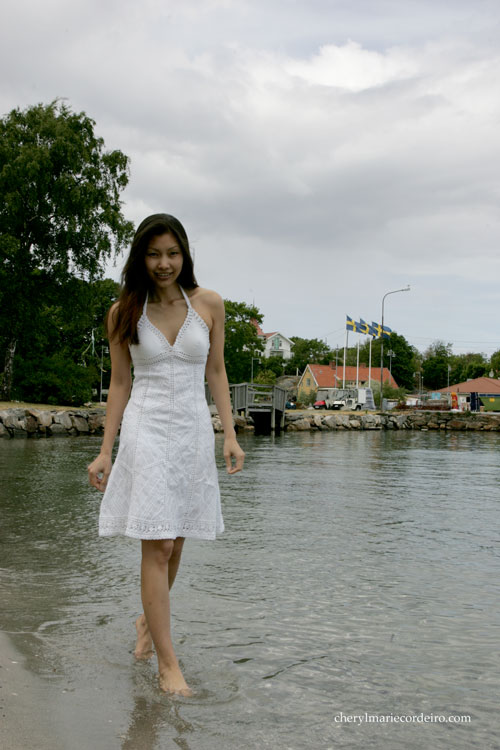 Brrrrr! My first toe-dip of the season, and possibly my last.
Missing the warm beaches at Singapore’s Sentosa Island. It would take quite a lottery win for me to go swimming in the sea this summer if the weather doesn’t let up! Outfit: A white crochet halter neck dress by BCBG Max Azria.

This island in the western Swedish archipelago has its own tradition on Midsummer’s, where it was here that the Society of Arbores literally brought back forests and green life.

For a number of decades every century, as long as anyone can remember, huge shoals of herring used to suddenly appear along the western Swedish coast. It is said that the sea was so full of herring that they could hardly find space to swim amongst themselves. During winter the fishermen could cut a hole in the ice and the herring would pour up onto the ice by themselves. While this might be of a slight exaggeration, the thing was that year after year the herring did indeed come back, by the millions. The most important periods were between 1747-1809, and then in 1877-1904. 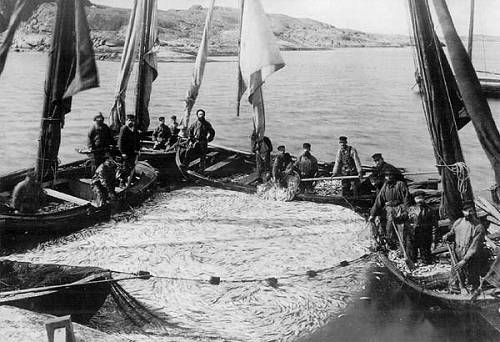 Classic picture of herring fishing along the western coast of Sweden in 1894. Note the barren cliffs in the background.

The herring was beyond plentiful. There were so many that it took decades for the fishermen to even invent equipment to catch all this fish. Then came the next problem, what to do with the catch. It was soon obvious that you could only eat that many light salted, hard salted, fried, steamed, broiled, roasted, poached, baked, sautéed, stewed, minced, dried, pickled or smoked herrings before you got sick of it. Finally someone came up with the idea that this fatty fish could actually be processed for only its fat. Eventually, this oil turned into a most important export product for the southwest coast of Sweden, and it is said that street lamps as far away as Paris were lit by this herring oil.

That processing however, asked for cooking and very soon the wood needed ran into a short supply. Actually pretty much everything that could burn was exhausted, right down to the moss. The devastating impact on the greenery and forests along this entire coast can still be seen today. In fact the bare cliffs of Bohuslän is still something of a natural tourist attraction. Most islands are also bare of trees, save one, which is Styrsö.

The reforestation of Styrsö was mostly due to the next invasion – tourists – after the herrings had disappeared. By the mid 19th century, it was office and industrial workers from the cities that were discovering nature, and who were taught by the new health experts, that indulging in salty mud and seaweed baths were the things to do, to recover their strength after a long year of working in dark and dusty factories and offices. And thus, the natural island spa was born.

So began a trail of steamers from the city to this island, landing their daily catch of bathing visitors all summer, and for several decades thereafter. Eventually these visitors decided to come together to do something about the deforestation, and they took it upon themselves to organize a reforestation program, founding in their wake in the early 1900s, the Society of Arbores, which dedicated itself to the reforestation of Styrsö.

Many of these dedicated individuals were influential persons who could muster thousands of school children to come out to the islands to plant small trees, bought and grown by the Society of Arbores.

The local inhabitants, mostly fishermen, sailors, small time farmers, smugglers (or pirates of sorts), occasional moon shiners and whatnot stood by and looked upon the activities in skeptical bewilderment. But eventually, many decided that this newly grown, rich access of fresh, green small tree plants all over the island, proved an excellent opportunity to venture into sheep farming. And this, they started as soon as the summer guests had gone home for the season.

After many years of disagreement on priorities between the summer guests and locals – on reforesting the island or having sheep eat off the plants – a truce or a balance of nature was struck between the food supply and the grazing livestock.

Some 100 years later today, local inhabitants of this island can now enjoy quite some lush, green vegetation all over the island AND order their slaughter of lamb for the autumn and winter festive seasons, giving in to the odd sight of some stately trees around here being strangely nibbled at their tops. 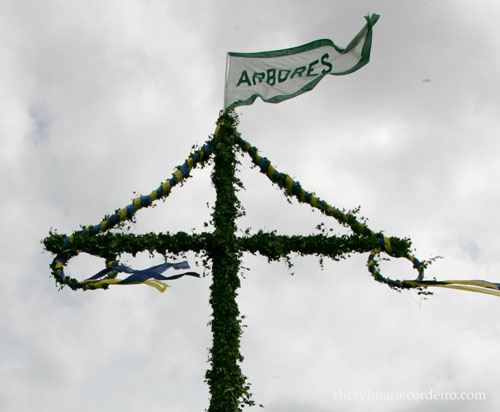 The Arbores flag, proudly flying atop this year’s Midsummer Pole.

The Society of Arbores is still active today and it is they who take upon themselves to organize the annual great Midsummer’s celebration, with music, song, dance, lotteries and games for both adults and children. 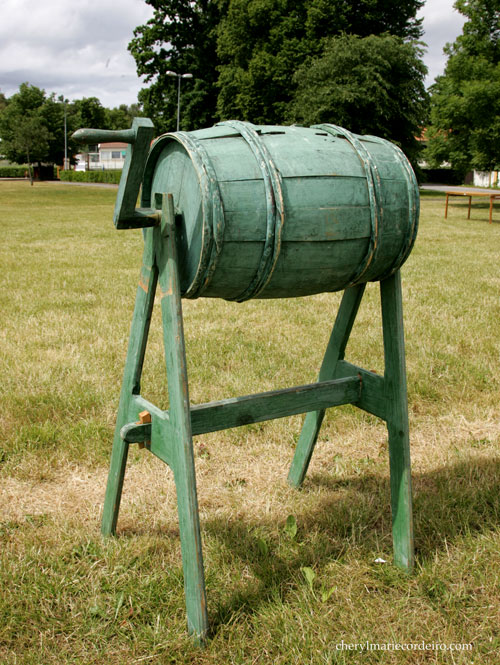 One of the antique lottery bins, used for lottery tumbles in favour of worthy causes for the islands.

And at this happy occasion, what makes a special appearance are the green lottery tumblers that were once used to collect funds for buying in plants and trees for this island. And every year at Midsummer these wooden barrels, still in their original green paint, are used to collect funds to other worthy purposes.

To this day and age, coincidence or not, the traditional and indispensable dishes that need to stand on each Swedish table at the Midsummer festivities are salted pickled herring and fresh potatoes to be downed by generous helpings of strong Swedish Schnapps or spiced (absolute) pure alcohol bumpers. Each piece of herring is usually accompanied by a drink and a song. This year the singing on this island was heard through the night till at least 3 o’clock in the morning, when the sun was already well on its way up. The day after, was very silent.