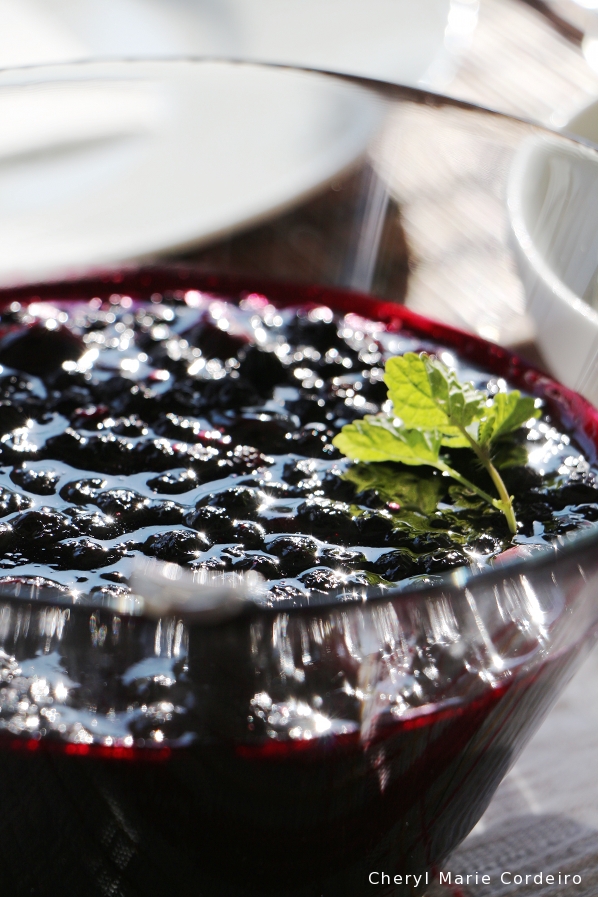 “Wow, this is fantastic! What was it you said that goes into making this blueberry sauce?”

“Pieces of chess – chessmen – as how you lay them on a chessboard. It is not one ingredient or another, but a combination of factors that includes time, over two decades.”

But even then I realised that I needed to take that blueberry filling home with me somehow. By ‘home’ it was meant, anywhere in the world that I was. If there were blueberries to be found, then there was this to become swiftly of them. I knew at first sight, I needed the recipe to this mouthful of creamy deep blue-purple heaven that wasn’t one bit infused with any sort of chocolate. Yes, what insight into my own culinary visions. 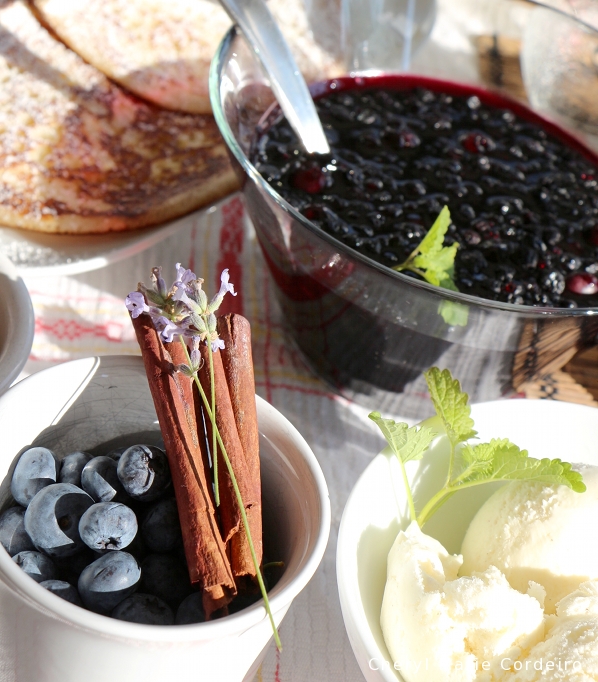 But envisioning something is different from doing something about it. Since blueberries were hardly native to the tropics, and I wasn’t about to start importing blueberries on my own to fuel this interest, it came to that I shelved the idea of making batches of thick blueberry sauce / cream whether for cheesecakes, muffins or spooning generously over chocolate ice-cream.

And that I loved the stuff didn’t also prepare me for the fact that one day, I would actually end up in a place that was blueberry friendly. Blueberries can be found in Sweden from large grocers to farmhouse road side stalls. The little blue-purple globes are for the picking in the wild if anyone wanted. Blueberries are so popular here, it is (almost) the prescribed fruit to combat winter depression. And when confronted with the reality of free pickings of blueberries in Sweden, the thought of making that cream I so loved when first encountered, escaped me for years. Till about two days ago, when given the opportunity with both berries at hand and guests to share it with over breakfast. Then, for as many years as there were no cream of blueberry on the table in my life, there now was.

On this occasion, there happened to also sit some red currant gel on the table, for the exact same reasons.

The currants were ripening nicely on the garden bushes outside and ready for the picking, which led to several red currant culinary projects, of which the gel was one of them. 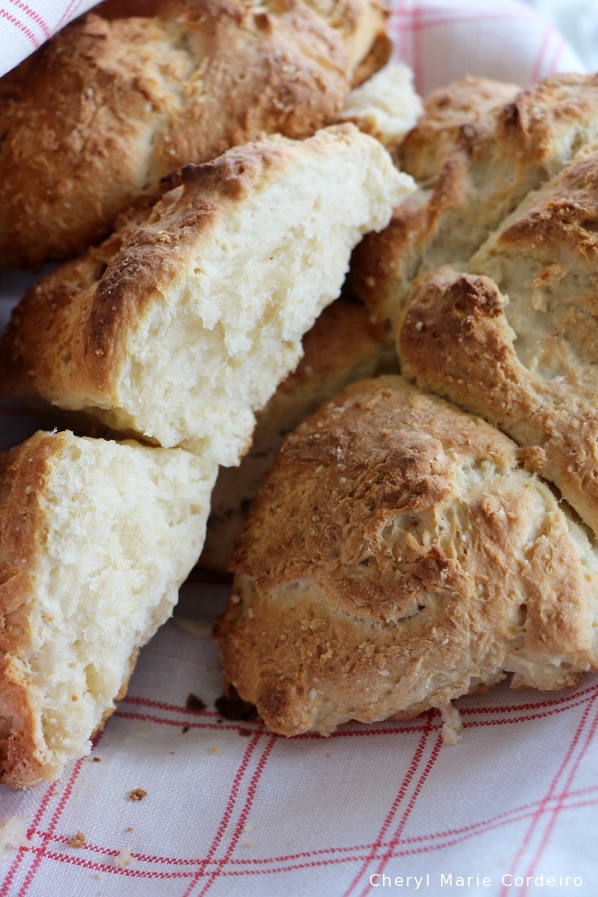 Homebaked scones, perfect accompaniment to any marmalade or jam, needs a total of about fifteen minutes preparation time with three main ingredients – flour, milk and butter – with a pinch of salt and sodium bicarbonate to rise in a high temperature, 250C oven for 12-15 minutes. 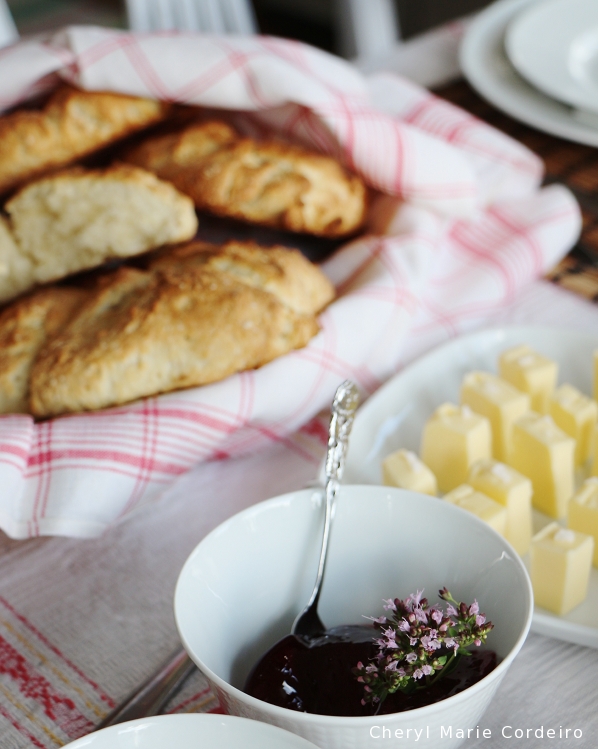 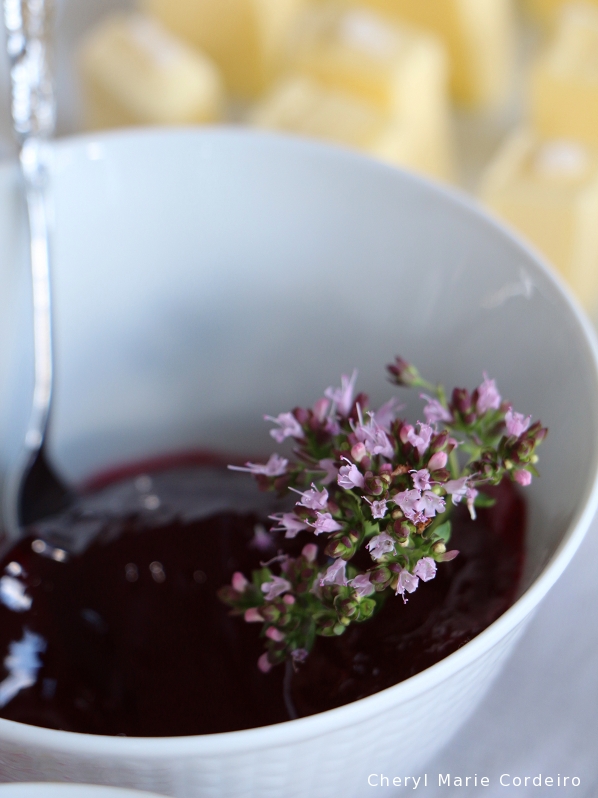 There are no secret ingredients to the blueberry cream. It is fresh blueberries, stirred with sugar over medium heat, and a teaspoon of cornflour starch to thicken. The red currant gel is likewise made with minimal of ingredients – fresh red currants and sugar. No other ingredient needed for the latter to gel, the natural fruit pectin in the currants will take care of that for you. As chef, what you’ll need to decide to the former is how thick you’d like your blueberry cream to turn out and to the latter, how sweet you’d prefer the red currant gel on toast or as a side condiment to red meat dishes.

Two different berries, and two different stories of how they came to be at this breakfast table. Common in both stories is that the majority (if not all) of the factors that contributed to the making of a successful cream / gel were just right in the process of the making, as chessmen set on a chess board that now simply fulfilled their functions and fell into place to produce wonderful culinary products to be enjoyed and shared.