A Swedish perspective on cucumber pickling, a matter of pragmatic luxury 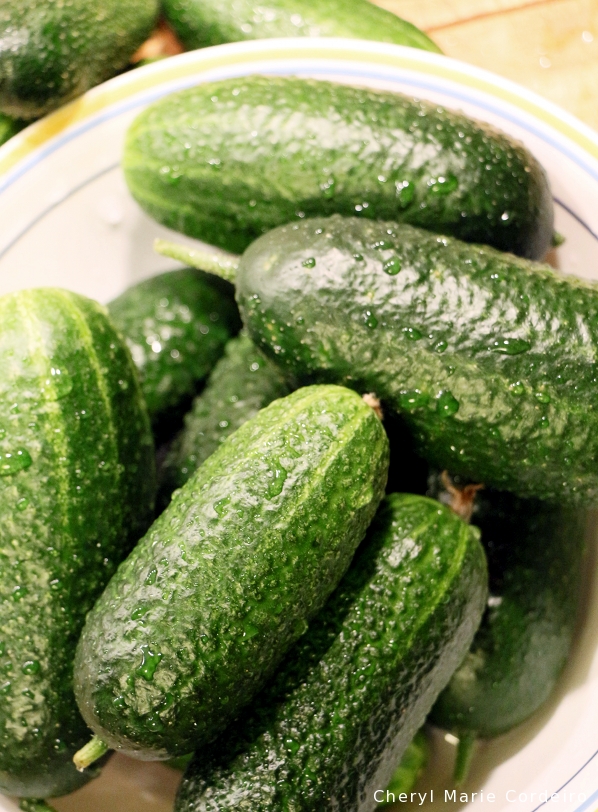 “Swedish Västerås” pickling cucumber crop from our own garden, scrubbed clean.
The preservation process depends entirely on the Lactobacillus bacteria that cover the skin of a naturally grown cucumber. These are removed by the food industry while harvesting as a matter of routine, thus complicating the home-pickling process.
Text & Photo © JE Nilsson, CM Cordeiro 2014

Sweden: product specialisation and luxury
There are often times more than meets the eye with everything, and I am not talking about the seeds in these well rounded Västerås fruits.

Since well into the second half of the 20th century, Sweden has become increasingly aware of environmental issues and the matter of sustainability. The growing realisation is that the everyday choices made by us from what we eat to how we manage the disposal of refuse, will not only affect us, but everyone along the supply-chain, as well as the coming generations that will inherit whatever we leave behind.

This growing awareness throughout Europe is reflected by single issue environmental parties losing their foothold in politics while their world view is adopted by most all parties.

The environmental problems to most societies, some would argue, are more practical than philosophical [1,2], where many countries, despite being economically advanced, continue to use refuse as landfill.

The challenge of sustainable design in general can be considered more a matter of situationally specific interpretation, rather than setting the objective of universal goals. Instead of promoting a singular ‘best practice’ technological fix as an approach to sustainability, an emphasis on pragmatism can be seen as a means to contest technological and scientific certainty and universalism [1,4].

But the process of a paradigm shift in human living and its organisation [8] works on several fronts.

A while back ago, I met with one director of International Development at the Swedish Trade Council. In a combined practical and philosophical approach, she told about her work with Swedish companies in Asia. Her primary portfolio was to assist Swedish companies in changing their relationship with their suppliers. The long term objective was to raise awareness in the Asian suppliers of the impact of their business on the environment, helping them view their production processes from a more global – sustainable – perspective.

– There is a paradox of food supplies in Asia, she explained. In some countries they don’t have enough food while at the same time in other countries, as much as seventy percent could be lost in terms of food wastage because of bad transportation, lack of proper storage facilities, and culture.

– You will need to see this as a process, a step-by-step process towards living in harmony with the environment and make what we have last longer. The underlying message is firm. It is not a matter of perceived culture. It is no longer enough to say, – Oh in my country we do like this – but it is a matter of global awareness and the need for global ethics to come to the fore.

In Sweden, ‘enabling’ technologies for consumers begun to be noticed in the 1980s [3,6]. This included, a significant shift in the manufacturing processes towards automation, and a do-it-yourself philosophy that placed the consumers in the production chain. It follows that such technologies allowed for a greater number of products and services to be tailored to the individual specifications of the customer.

‘Home cooked 2.0’
As an example of greater specialisation of products in Sweden, visible results were seen in the media and recreation markets in the late seventies to mid-eighties. Total sales in the magazine market fell by 25%, mainly hitting the large general-interest family magazines, whilst the new entrants to the number of different journals catering to special interests almost doubled [6].

The travel industry has also been affected by diversification and specialization. From low cost air lifts to exotic locations, to cutomized programmes of wildlife, art, music, nature, gourmet food to log-rafting and igloo tours in Greenland etc. The Ice Hotel in Piteå being a noticeable example.

Enabling services and the move towards automation, meant that individuals are now at greater liberty to allocate their time on activities they feel are meaningful to themselves [5,7]. It opened up possibilities for individuals to pursue their private interests, such as having a super specialized coffee made for them at a roadside cafe, chatting, or playing digital games on their mobile phones.

Luxury and status symbols are also progressively being redefined. When products can not only be mass produced but machine crafted to individual specifications, the ability to consume in excess and beyond becomes dated.

A co-evolutionary awareness
The new found liberty to allocate time to meaningful activities also has introduced as juxtaposed observation, that Swedes are becoming increasingly aware of the limited availability of personal time when at work, and the issue on defining what is quality living.

The 1990’s generation have as shared characteristic, a certain disinterest in common wage labour that they consider meaningless and dissatisfying [10]. These individuals are generally disinterested in becoming ‘managers’ and hardly believe in sacrificing all waking hours for a career. To them, other values are being considered as more important. Time, being the most valuable asset of all, tops this list. To have time to do as what interests and motivates you, to live well, acquiring and enjoying things that cannot be had otherwise, can be said to define the pragmatic luxury of contemporary Sweden.

In this perspective it is interesting to see that transportation by bicycles is taking hold as a popular way of commuting. Young people don’t see cars as status symbols or symbols of freedom anymore, but rather causes of pollution. Food, should be grown as locally as possible, and livestock and poultry – if any – should be treated with respect and decency in the process of production and consumption.

What remains uncertain is if this is a process caused by necessity and the inability in a high tax society to increase financial standards of living, or if it is indeed a change in ideological paradigm towards a growing awareness of the need for sustainable living. Still, on day to day basis decisions are already made.

While pondering these aspects of co-evolutionary awareness in living, and with the understanding that any discussion on pickling cucumbers in Sweden is likely to develop pretty much in the same direction as that of the topic of ‘real’ Swedish meatballs – meaning the best, and anyone’s own mother’s recipe – it is a pleasure to share our own recipe of home pickling of cucumbers.

Pickling liquid
Boil the following together:

Pour the boiling liquid over the cucumber slices and leave this overnight.

Next day, distribute into clean jars. Add dill flower heads (crowns) for flavour and decoration. Add some horseradish pieces for help with preservation. Ready to eat after about one week of maturing.

This could well be our first Swedish julbord dish, even if we currently won’t admit it. 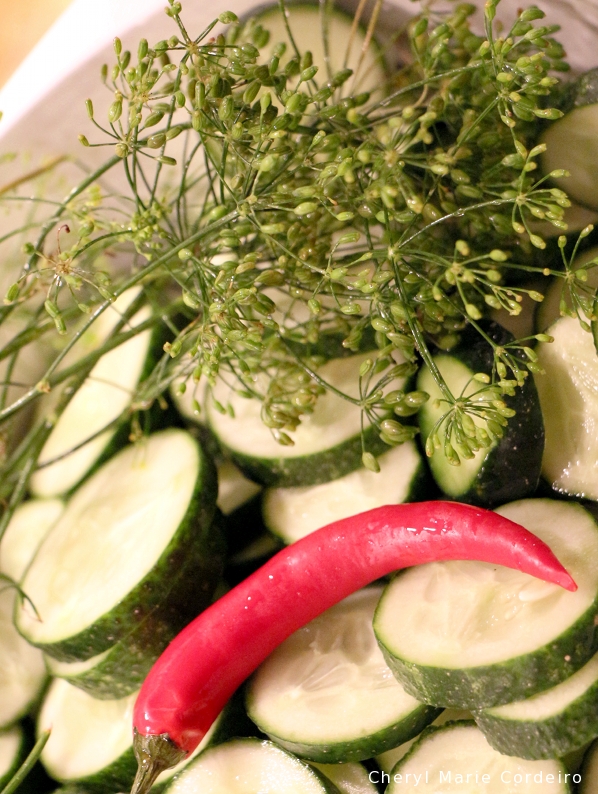 Particular to the Swedish pickling of cucumbers is the use of dill flower heads. Dill is on the whole very popular in Swedish food for pickling and curing of everything from salmon and herring to vegetables. A chilli was added according to the Singaporean understanding that everything tastes better with chilli. 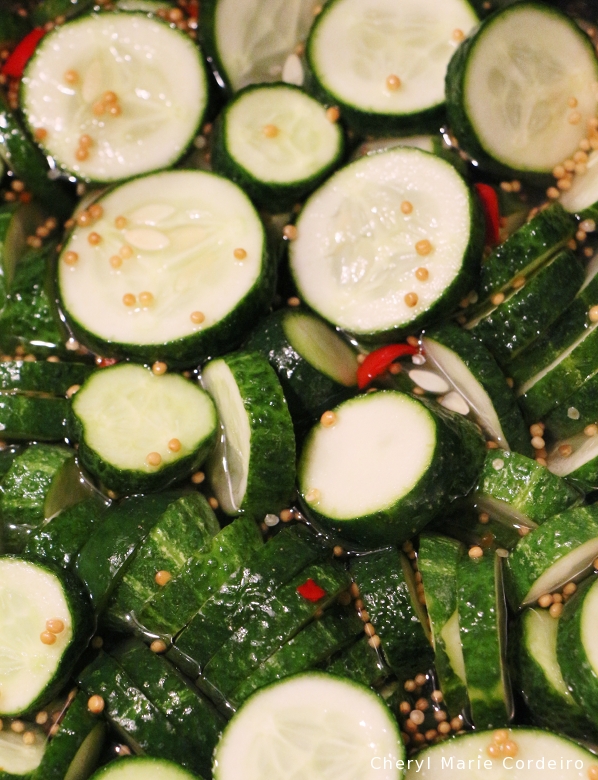 In this recipe the boiled vinegar brine is poured over the cucumber slices. It will just barely cover the slices. Overnight the salt will marinate the cucumber and extract more than enough extra liquid to fill up the jars.

In line with ‘the real Swedish meatballs’ phenomenon, there are any number of recipes on how to preserve cucumbers all based on natural fermentation. This recipe includes vinegar and sugar but the preservation process depends on the Lactobacillus bacteria that cover the skin of a naturally growing cucumber. Since these are procedurally removed during commercial harvesting/packing processes you will either need to put back those bacteria, else the pickling will not work, or use naturally grown and harvested cucumbers. 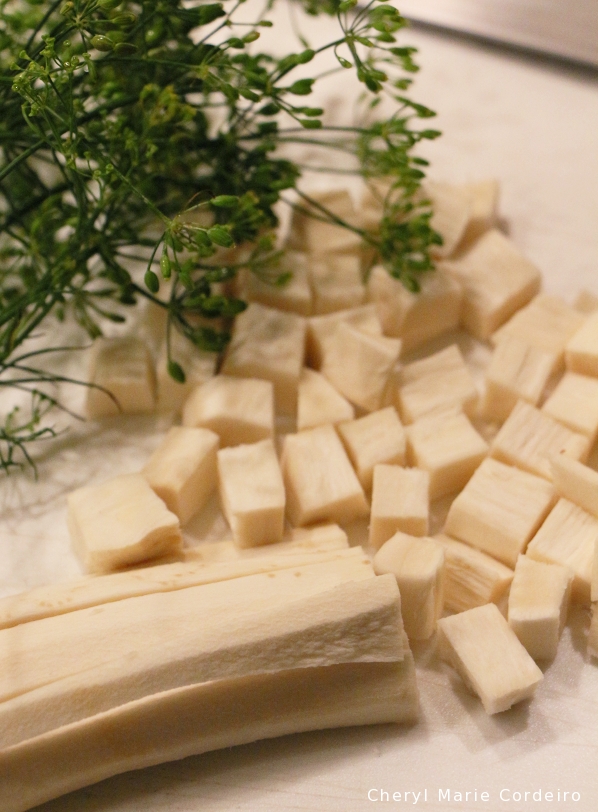 Horseradish grows like weed in many Swedish gardens. Botanically it’s a relative to wasabi, and due to its antibacterial properties, same as crushed mustard actually, it is popular in traditional pickling both for its flavour and certain food preservation properties. 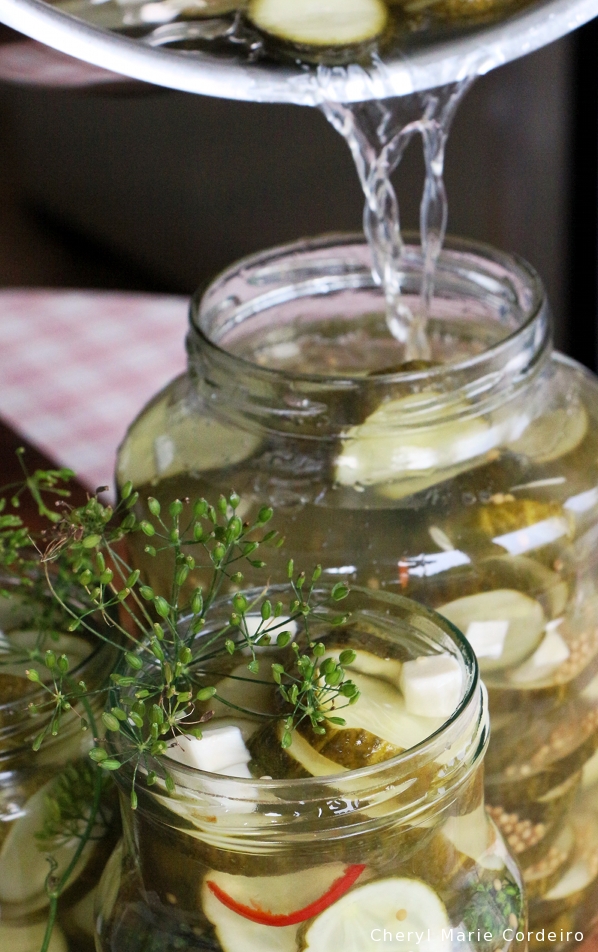 “Are we there yet?”
Admittedly it is difficult to not try this out piece by piece, to see if it is ready yet, but give it at least one week ideally more, to mature and it will be all the better for it.

Living organisation and consumption patterns seem to indicate that what is being defined as Swedish luxury, is the development of a fundamental understanding of sustainable design as co-evolutionary living. These ideas and practices are socio-technical processes that engage a broad range of human and non-human actors in the production and use of a single global geo-physical space [9].

Scarcity and exclusivity are still part of the very definition of luxury but the objects have changed. It is no longer the most expensive of handbags, with ideally several of them in the same model but of different colour that counts, but the crispest of salad leaves and homemade honey from bees living in their beehive nearby. Not necessarily to sell, but for yourself.

It is not more than a hundred years ago that Sweden was 90 percent agrarian. With increasing automation and consumers becoming co-producers of products and services, free time when not seen as unemployment figures is increasing. And at this point in time, it seems that Swedes are going back to growing their own food, partly out of distrust in the food industry, and partly to achieve a form of optimal quality of living.

Perhaps not conclusive evidence, but just a few weeks ago I noticed against the windshield of a large motor yacht, a fresh and lush basil plant of their own, brought along to sea just to provide fresh herb for the onboard meals. Quite the luxury.