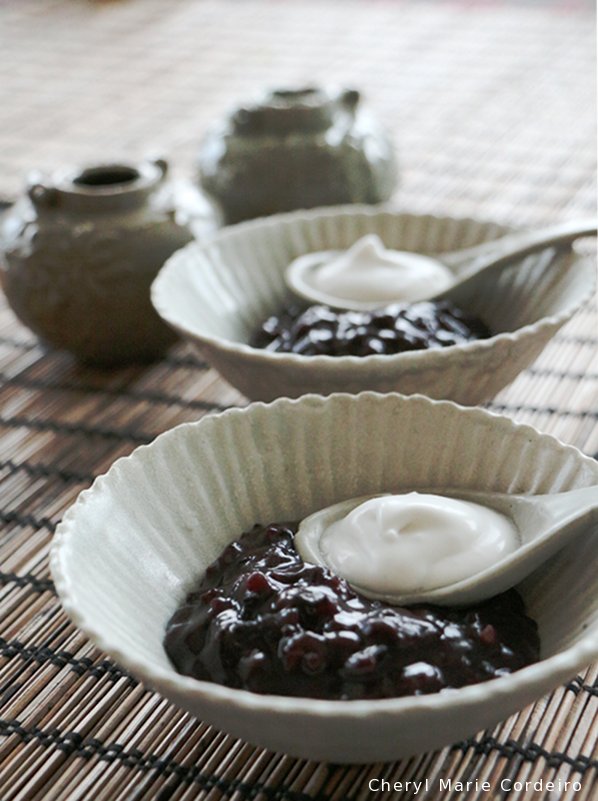 The granddaughter, now in her early twenties, watched her grandmother prepare the batter of a mixture of white glutinous rice flour, tapioca flour, a pinch of salt and a pinch of yeast etcetera, for a sweet and sticky Asian cupcake. It was humid outdoors and this was something to look forward to with light tea, in the cool of the patio on the rattan settee outdoors, overlooking the small but tidy garden.

Rice, being a staple of most of East and Southeast-Asia, is found in a surprising array of sweetened desserts in the region, and it made the main ingredient in this recipe. Besides, it was one of the granddaughter’s favourite desserts – sweet sticky cupcakes – made by steaming. They were had only around the time of the Lunar New Year, at babies’ month old celebrations (with red food colouring added to the batter), engagement parties – and weddings.

The granddaughter had watched her grandmother make these cupcakes from when she was a little girl. “Cildrun are to be síene, not hearde”, is an oft-heard old-fashioned saying in the west of children. “Cildrun are neither to be síene, nor hearde”, would be the corresponding (unspoken but enacted) phrase in the east of children. But as a girl, social gendering processes meant that the granddaughter was welcomed into the kitchen by the older women of the family. The process is slow (begins from when the girl can independently prop herself up in the arms of her mother, before crawling) and the mission far sighted (lifelong). The older women of the family were to ensure that the younger women could cook, and cook well. Concessions if there were any, were made on the basis of mood of the day, and overall favourableness of the child in ranked order to the rest of the other children of the family, males excluded.

The grandmother spoke no English, and the young lad spoke no creole Baba Malay. It was thus up to the granddaughter to translate between the older woman and the younger lad.

In the high-ceilinged kitchen of the house, with the ceiling fan put on low, the young lad stood close, listening to the talk between grandmother and granddaughter. The granddaughter then forwarded the instructions:

– So you have one part glutinous rice flour, and one part tapioca flour.
– And what is that beige powder there?
– That’s yeast, for the batter to rise, but that must be diluted with lukewarm water, not too warm or the yeast will die.
– And that’s salt?
– Yes, that’s salt. And now, you can see that she’s pouring the rest of the liquid into the flour and stirring.
– How much water goes in?

The granddaughter turns to the grandmother to reconfirm the amount of water that goes into the batter. “Agak-agak” was the reply. And in addition to a strict tone of voice, a string of what sounded like specific instructions in creole. The granddaughter registered some kind of reaction but kept mostly silent, cheeks slightly flushed hot pink.

– Agak-agak.
– Agak-agak? What does that mean? I’m pretty sure your grandmother said more than agak-agak. What did she say?
– She said agak-agak!
– And…?
– And that I have been watching her do this since I was able to shove two kueh bankits into my mouth with both my pudgy little hands. The cookies were so dry, but I was so greedy, can eat two at once! So there is no way that I do not know this by heart. And if I don’t know, I should spend the next two weekends with her in her kitchen. I should practice making these for the next Chinese New Year and for when my cousin gives birth, next month. The water in the batter should be just enough to make it smooth and sticky, but not so sticky as to stick to the sides of the bowl when stirring with a wooden spoon.

The young lad smiled. He was amused:

– So how many cupcakes does a person need to make in order to learn this agak-agak thing?
– Years.
– So that means you can tutor me in that many years then?

– Here, the batter is ready. See how smooth it is? And how it doesn’t stick to the sides of the pot? Now go get the moulds from the table over there and help me put the batter into the cups for steaming.

That, the granddaughter did with the young lad.