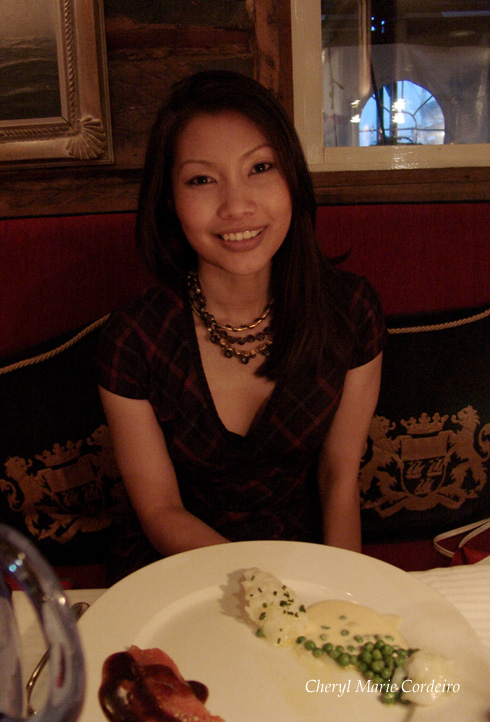 It’s funny how impressions of festivities change with time the longer you’ve been in the place. When I first arrived in Sweden, slightly more than 7 years ago, I thought it strange that Swedes did not celebrate Christmas with quite the same pomp as Singapore. I rationalized that Singapore, as a multi-racial society, took pride in celebrating all festivities of its races with splendour, lighting up various parts of the city country, Geylang during Hari Raya and Orchard Road during Christmas for example, depending on the festivities, while Sweden being rather secular, played down Christmas as such. 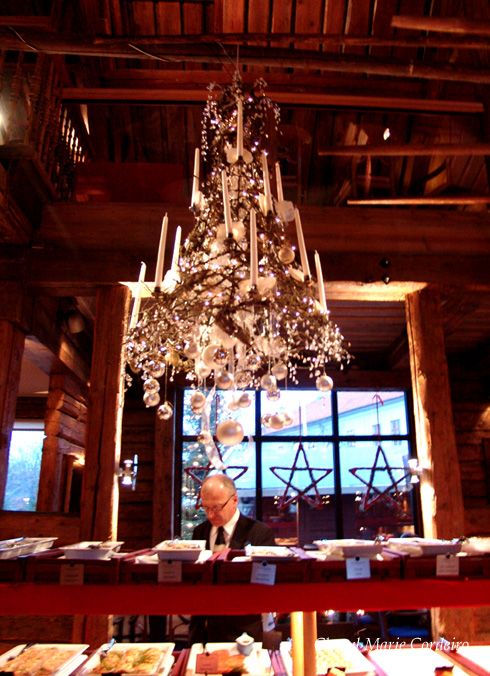 A silver and white Christmas tree suspended from the ceiling of the restaurant, Sjömagasinet.

I’ve found over the years though that contrary to what I believed at first, Sweden did indeed celebrate Christmas as much as Singapore, but in a manner that needed much observation and understanding of its people and culture – an aspect that one, with a quick visit to the country over a few days might wont to miss. 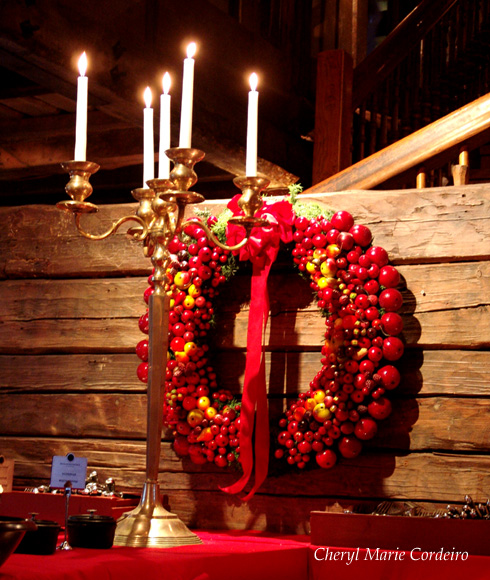 Christmas wreath and candles alongside the julbord.

Sweden celebrates Christmas with profound rootedness in the Swedish tradition with hand crafted frocks, decorations and not the least in the cooking of Swedish festive food. 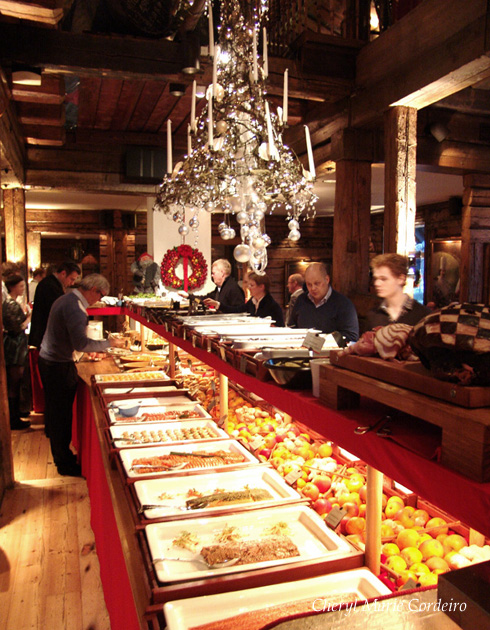 If you are spending Christmas in Scandinavia and in particular Sweden, I think one of the best ways to experience a true Swedish jultide is to book yourself an evening at their Christmas smorgasbord.

A flip through an annual food and wine guide will tell of the region’s better restaurants. In Gothenburg, a top recommendation would be Sjömagasinet that is located down by the old city wharves by the harbour.

While a lot of Swedish food includes pickled herring and seafood in general, Sjömagasinet’s specialty and forte is everything piscatorial. 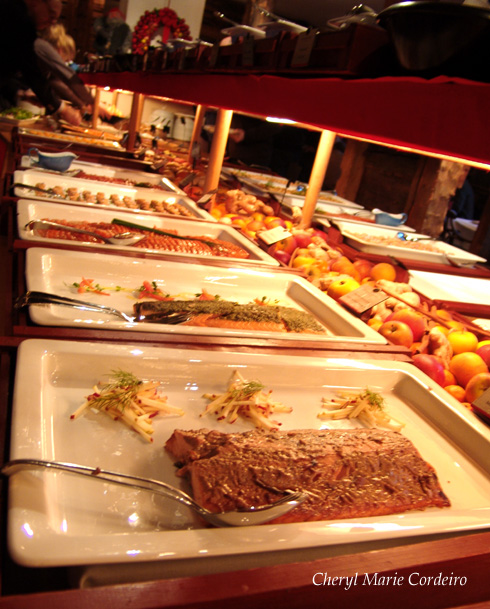 Apart from lutfisk, which I find myself often drawn to at the Swedish Christmas tables, this year, Leif Mannerström and his team have managed to lift many eyebrows in approval at our Christmas table with the honey mustard sauce that accompanied the team’s gravlax. Describing that it tastes like a luscious and decadent bak kwa or barbeque sweetmeat sauce doesn’t quite seem to do it justice, but it goes along those lines, with a generous baste of luxury.

Gravad lax is cured salmon in salt and dill. Like the Eurasian sugee cake that makes its appearance at any, if not most Eurasian celebrations, gravad lax is associated not just with Christmas in Sweden, but with Easter and Midsummer. Even with its regular appearance through the year, one seldom tires of gravad lax, but rather look forward to its slight variations, perhaps most prominently featured in the accompanying mustard sauce. 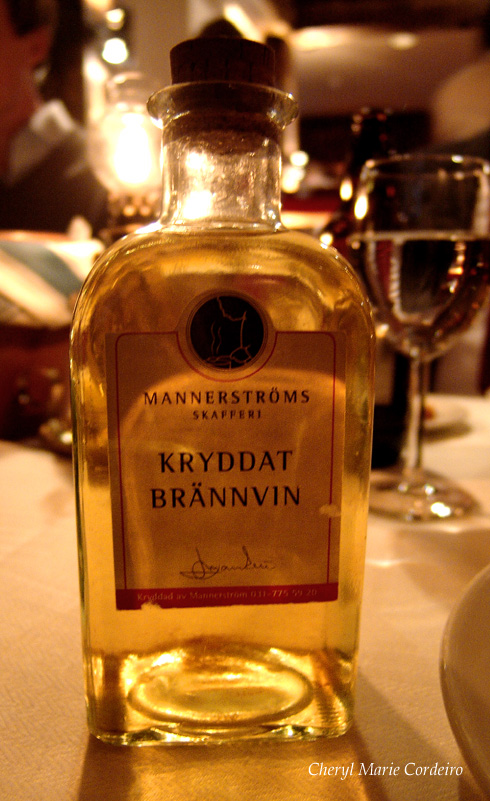 The recipes featured at most Swedish julbords have strong historical roots that is closely connected to the type of climate they have in the Nordic region. Everything from the preservation process of lutfisk, gravad lax to the making of their own brännvin or snaps, lends perspective on the people’s way of life of being a self-sufficient and independent household. There is no concept of a hawker center here in Sweden and fast food, besides McDonald’s, Max and Burger King, hardly seemed to have caught on in Sweden. 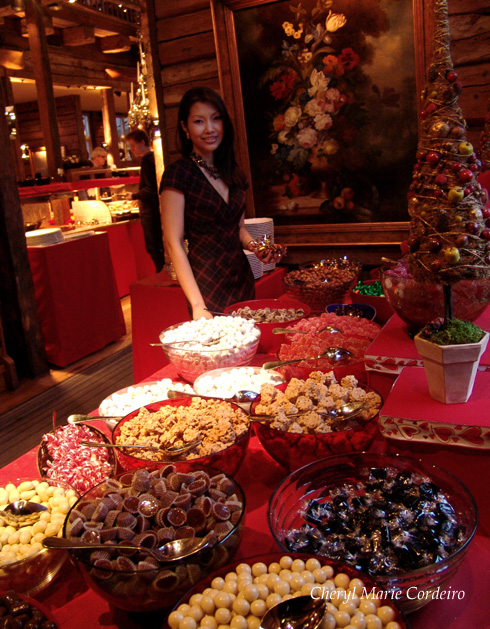 Part of the handmade candies served this year at Sjömagasinet, 2009. 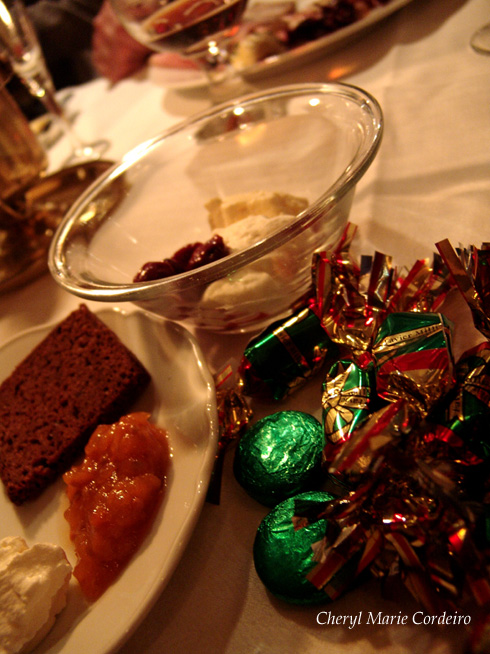 A selection of my own dessert plate, with cloudberry jam to the bottom left of the picture and a slice of gingerbread cake. In the bowl, Swedish cheesecake with cherry jam and whipped cream.

Attention is paid to all aspects of the Swedish Christmas meal, where even the smallest treats such as candied desserts would make any family proud to have perfected.

A fruit jam that is often found at the dessert table is cloudberry jam. Cloudberry is native to the Northern hemisphere. Rare and hazardous to harvest since it grows wild in the moorlands and marshes, this jam makes an excellent accompaniment to the Swedish cheesecake, rice pudding or a heavily spiced slice of gingerbread. You will recognize the jam by its deep golden yellow. 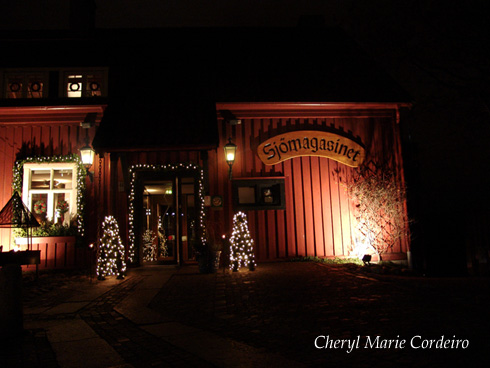 Outside of Sjömagasinet, on a clear winter’s night, 2009.

There are many details that I’ve unearthed about Sweden during my years here, where I find that to understand a people, its culture and to find value in their beliefs, is in part to finally settle down with them and begin to find your own heart in what is special to you.

The Swedish julbord, is part of what makes Christmas special in this country and if you’re looking to experience traditional Swedish fare, then a julbord booking is the best there is to offer during this festive season.

For more readings on Sjömagasinet at this site, click on the following links:

3 thoughts on “Swedish Christmas tradition in its julbord: Sjömagasinet 2009”