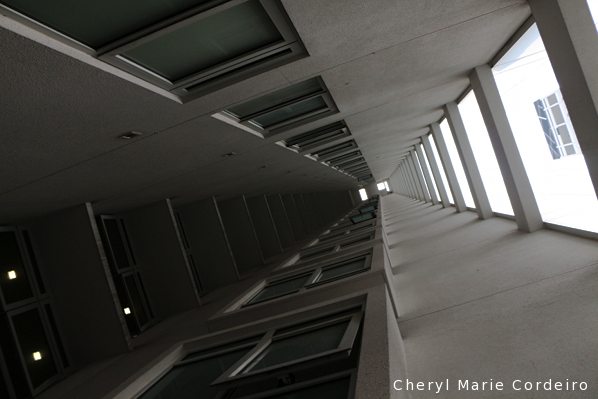 “So what is it like after six o’clock in the evenings here?” Marshall asked Jim, taking a deep drag on his cigarette. He had resolved to quit smoking eighty years ago in his early thirties, but kept at it when he realized he was more alive than most others he met at the various intersections of spacetime.

“It’s a ghost town over here after six in the evenings” Jim replied, shaking his head. Marshall smiled and nodded, he knew that. Jim moved on in the conversation to his work, his life revolving around the shipping industry.

As Jim was talking about a business deal gone sour due to a policy glitch across the continents that stalled the cargo shipment of perishable raw material that would cost him hundreds of thousands of dollars for every day the ship remained at dock, Marshall couldn’t bring himself to tell Jim that Jim was already dead. This shipping deal, one from the next, would not matter in Jim’s lifetime. Not in the manner of importance and vexation Jim placed on it. From where Marshall stood, the policies that kept Jim’s ship stalled at the dock would not change in a decade more time to come. Policies such as those troubling Jim’s business would be the discussion point of politicians whose myopia in self-interest would lead them time and again towards a failed agreement. And that Jim, instead of spending time trying to fix a policy he had no influence over, would have been better off if he had booked that trip to Oahu, taking his wife and daughters on a holiday. In another two years from where Jim stood, a hurricane would take Oahu, the paradise of which will be lost to mankind as they now know it. The next real opportunity for a holiday Jim would have in his busy life would be three years from now. Marshall took another deep drag on his cigarette, mentioning nothing to Jim.

In the lifetime Jim knew Marshall, where they grew up as classmates in the same school, went to the army together and when Marshall was Jim’s best man at Jim’s first marriage, Marshall had never told Jim of his real background, of form shifting between layers of the matrix of the tesseract.

Finishing off the ice-cold beer, Jim stood up from the comfortable dark rattan seats. He walked to the edge of the balcony and leaned against the supporting glass panel and peered as if in daydream over the muddied river. This river ran as a sturdy vein through the heart of the now modern tropical city. It brought life in core trade to the dwelling in it’s early days as a quiet fishing settlement, and continues to do so today. As Jim peered at the river, whom he saw as the body of a snake on alert, Joseph Conrad’s heart of darkness came to his mind, except the women in the tropics were much more beautiful, Jim thought with a lopsided smile.

“Another beer, Marshall?” Jim inquired as he stepped away from the glass panel of the balcony.

“No thanks, Jim. I’ll need to be going. Heavy day tomorrow at work. One more round of negotiations with the big players y’know.”

Jim nodded. Marshall rose from his seat and headed to the door. After all this time outside of the system, Marshall still could not fathom that it was time that he understood nothing of. Every waking moment was a moment experienced in a time that has just past. Nothing is ever now, because now is by definition, never to be. ‘Was’ is the only way things are. So in effect, Marshall, even if he seemed to Jim to step through that door going somewhere, was not going anywhere at all. His exit from Jim’s presence would be in the form of a form shift.

In the grid-of-things, at any point in the tesseract, Marshall’s consciousness drew him to places where he should be for that point in spacetime. Once there, every waking moment is again experienced as a time just past. But he knew about the policies remaining unchanged for the next decade, he knew about Oahu’s devastation, because of living beside time, allowing him to enter and leave as he pleased, never really meeting reality. The bonds of lasting relations in general belonged to the other’s perspective, never to Marshall.

Marshall gave a last nod of acknowledgement for the evening in Jim’s direction. “I’ll be seeing you this weekend, Marshall.” Jim replied, “I’ll bring my wife and kids to your place.” He smiled.

“You’re always welcome over Jim. But this weekend? Why is that?”

Marshall smiled. “Yeah, that’s right.” He replied. “I guess the beer’s on me then. Say hi to Jenny and the girls for me.”