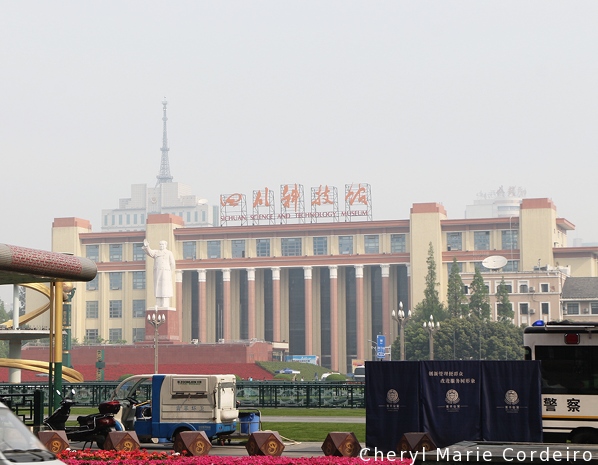 As I walk along the street, my arms laden with books, a woman with a child in tow stop me to ask for directions, “Do you know how to get to Tianfu Square?” she said in Mandarin, without hint of any regional accent. “Yes, you go straight and then take a left up ahead. Just follow this road.” I replied. As soon as I turned my attention from her to continue walking back to the hotel, the realization hit me that I, having spent less than a week in Chengdu city, China, was giving directions to a native of the land. I smiled and hoped that Tianfu Square was really where she was headed. I might have heard wrong.

My first impression upon landing in Chengdu was that city’s atmosphere was blanketed in smog, and that its people had cultivated their talent of telepathy. Whether pedestrian, motorcyclist, bicyclist or automobile driver, they all seemed to have the ability to navigate the busiest cross-sections without accident, whilst focusing full attention to their mobile phones in texting or digital gaming. I also felt distinctly transgender, with a Swedish tweed summer jacket over a plain white collared shirt, a pair of navy tight jeans and moccasin flats. This was in distinct contrast to most women in Chengdu donned pink stilettos, a frilly lace skirt and a likewise frilly Hello Kitty hairclip on their way to work, entering the glass skyscrapers of the city’s financial district.

The economic growth engines of the globe certainly lie in Asia. And China’s rapid development is reflected in its landscape. A number of taxi rides around town during my stay, showed how various parts of the city had simultaneously built hundreds of new condominium units ready for the moving in. With about ten million inhabitants in Chengdu, I still couldn’t help but wonder which peoples would make home those units that mushroomed at the outskirts of the city.

At the heart of the city, right next to the luxury branded flagship stores of Tainfu Square is currently a few dusty and grey buildings built out to the quarters of a square. On these streets is a small, meandering wet market where the very old, and the very young spend their days. Individuals of in-between ages would be at work. The street market had only two meat sellers and the rest of about twenty street vendors sold either hawker food, or vegetables. One vendor had only one large basket full of deep purple bamboo shoots to sell, which he did brisk business on, with weighing scales and all, carried on his shoulder. Other niceties like hair accessories, socks, and mobile phone holders were sold on wooden carts, ready to move to another destination, to another street corner during the day.

During the early 1980s, when China had just opened its doors to the outside world, it could be observed in the coastal city of Shanghai, piles of bricks simply being poured onto the sides of sanded streets. The energy and ambition of the city could be felt in those very blocks of bricks, lying by the roadside full of infrastructural potential. Today in Chengdu, if you sit long enough in one spot, you’d see the similar piles of bricks being consumed by the hour, the towering structures behind growing as if cement could dry with will, as nail varnish on nails.

I spoke with various individuals I met on living in Chengdu, in developing China, from university professors to taxi drivers. While they all agreed that life was “ever changing, always changing, in one day things can change”, the tone of voice in which this was conveyed was filled with humour and amusement, devoid of any acidity. They rather enjoyed and welcomed the changes they were witnessing. They laughed at how one train station with nonchalant and impolite staff had overnight, transformed themselves into models of world class quality service, with smiles and the patience of Buddhist monks at unruly commuters when they were told by the central government that the station had to turn a higher profit or risk closing.

My last and possibly deepest impression of Chengdu and of China this time around, came onboard the flight back from Chengdu to Amsterdam. What was a flight home for me, was to be a pure fifteen days of adventure for a group of 40 elderly Chinese who in their retirement years of between 65 and 75 years, were for the first time, travelling to Europe.

I sat next to two small, vivacious ladies who were in their late sixties and mid-seventies. They spoke in a mix of Mandarin and Chengdu dialect. They asked me many questions, such from which country I came, if I was married, if I had children and if I was travelling alone. To make themselves comfortable on flight, they had prepared by bringing several must-haves onboard. Dried sweetmeat, spicy roasted nuts and longan fruit. Settling into their seats, they beamed bright smiles in my direction as they gingerly brought out slippers that they had neatly packed in plastic bags, wrapped individually in a bunch of old newspapers.

In China, they made retirement at age 55 they told me. They were very excited about this tour because it was the first time they would see Europe. They would cover England, France and Italy, even Netherlands. They kept close to the group and kept track of the tour leader all through the flight, checking for when the plane would land and how they would gather after the plane had landed. They didn’t like salad with dressing, but they had no qualms finishing off my portion of rice (for lunch) and noodles (for dinner) during the flight. They would never dare travel alone they told me, “It was too dangerous”. They thought I was “very brave”. And as we talked, the ladies became quite certain that it was difficult for me to live in Sweden with my husband whilst my parents were still in Singapore. They thought I must spend a fortune on phonecalls to my parents, everyday. They also marveled at my ability to sleep during the flight, when all they felt was restlessness that made them stand and walk-about, exploring the narrow airplane grounds.

I enjoyed their spirited outlook on life and took pleasure in their company during the flight, translating where I could between them and the stewardess when it came to food orders.

So it came to that while at first, I had the impression of a smog filled city, by the end of my short stay in Chengdu, I saw sunshine, blue sky covered in clouds, the shadows of its mountains in the far off horizon, a meandering street market, and children with their nannies playing in enclosed living compounds.

The two elderly women thought I was brave to travel alone, when in fact, I think it is they who are the braver and the more curious between us. The China that they had grown up in, where they had worked so hard to build for themselves, has changed. And in my view, it is they as well as those along the street markets that make Chengdu living, and a living Chengdu. Tarpaulin canopies cover the balconies of these residential units. 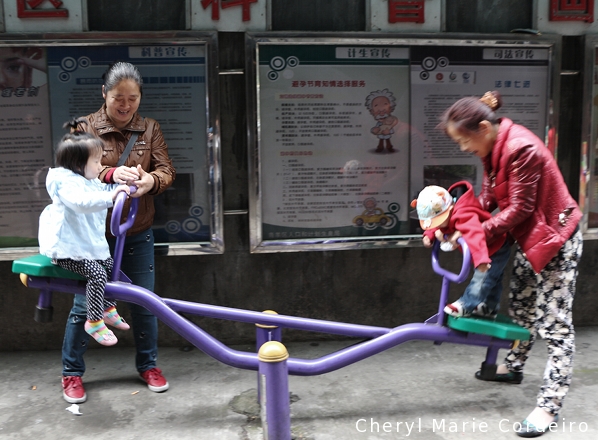 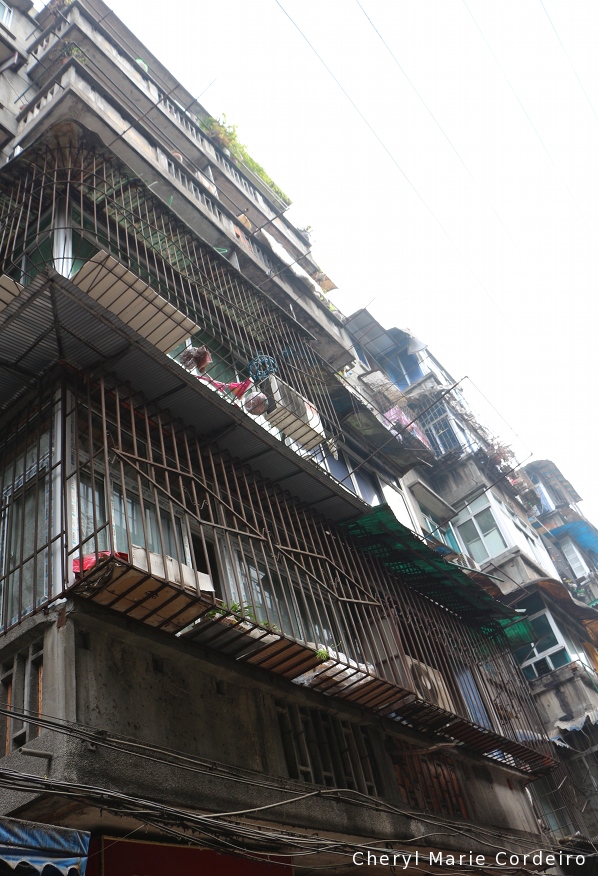 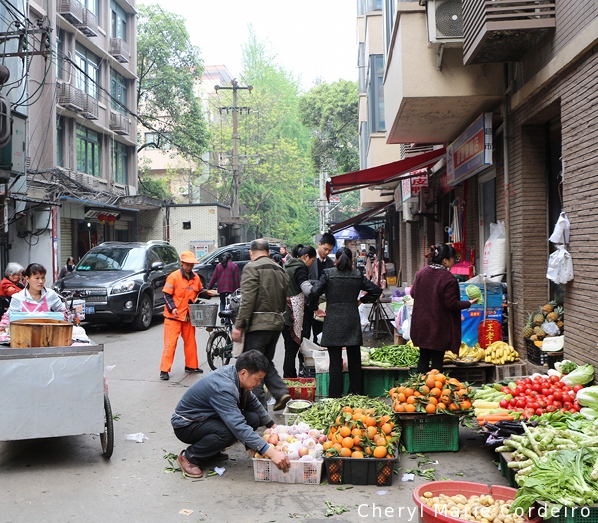 A day in the life of. 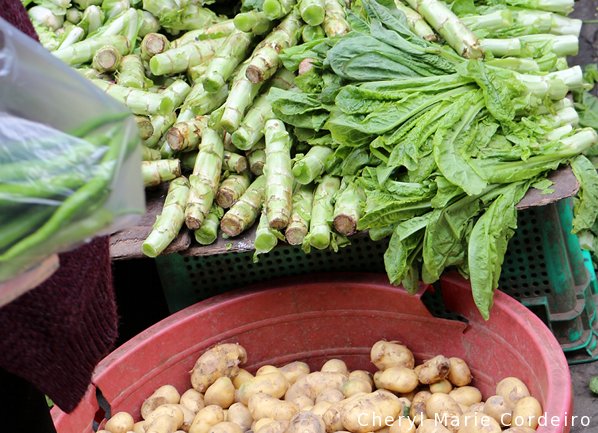 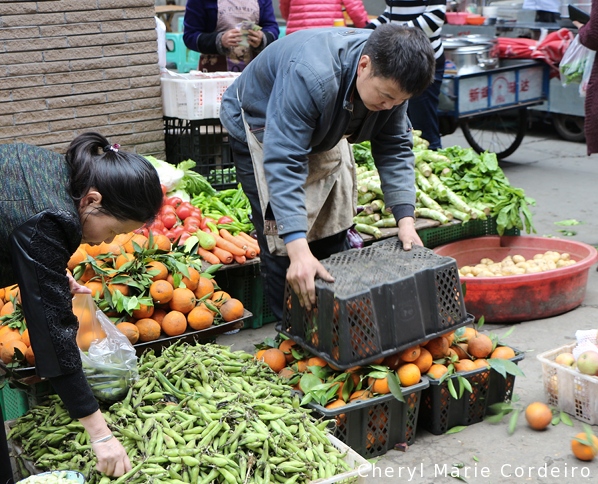 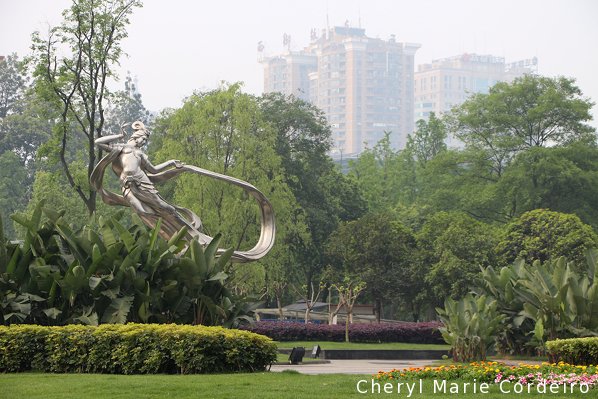 In the city of Chengdu, you’ll find a myriad of landscapes and what seems like self-sufficient domes of reality.