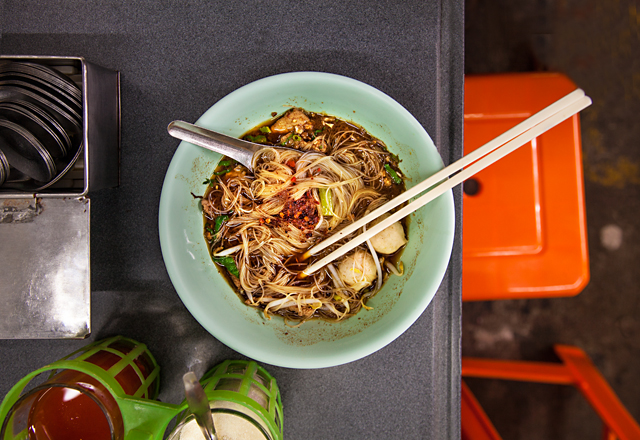 She saw that I had a camera in hand, and that I didn’t dress right. I had on a laser cut wool coat in light sand, with a broad collar. “You are disturbing us with your camera!” the elderly lady voiced loudly in my direction as I walked past. She was wearing a patchwork cotton jacket in the style of a samfu, her hair that was silvered with time, was kept in a short bob that fell just to her earlobes. She had a black pin to one side of her head, keeping her hair from her face. I guessed her age to be around seventy, although she looked much younger. She was sitting by the market roadside hawker whose one specialty was in selling boiled pig offal soup. At her remark, I put down the camera and looked at her, and she waved at me to join her at her table. I said I was headed towards the central square, looking for a bookstore. “But that you can do later. Why are you rushing? I see all you young people, always rushing somewhere. Come! Sit here! Only a few minutes!”

I joined her at the roadside table, drawing what once was a bright red plastic stool, now worn and peeling at the sides.

She looked at me, then looked at the pig offal soup in a bowl in front of her and offered me part of her bowl of soup. “Try?” she said. “No, thank you. I’ve already eaten” I replied. Unconvinced of my answer, she briskly got up from her seat and walked over to the hawker stall right next to the one that sold pig offal soup, and ordered a bowl of fishball rice noodles. In two minutes, it was on the table in front of me.

“Where are you from? You are not from here, are you?” she asked, after sipping some soup directly from the warm bowl in front of her.

“No, I’m not from here. I was born in Singapore. But I now live in Sweden.” I replied.

“Oh Singapore! I know that. I have heard of it. It is very good living there, no?” she said. I kept silent for a minute. “Well, yes. But life is a little bit faster than what it is here on this street.” I replied.

Just then, a colourful ball landed at her feet. A little boy who was playing nearby had kicked the ball in our direction where it had bounced off the leg of the table where we sat. The elderly lady reacted nothing to the little boy or the ball that the boy was now running to fetch. She continued eating, “Eat! Eat! It’s good fishball. I know the fish seller around the corner. This is freshly made!” I tucked into the fishball noodles, my eyes following the little boy’s movements.

“When I was young”, the elderly lady started, “I was working in the fields, growing bai cai and bitter gourd. Then there was development and we had to move. I have three children, but they are not here in this region anymore. They have moved to find work. They come back sometimes to see me. Do you go back to see your parents?”

“It must be very hard for you”, she said. “I want to go to Singapore some day. I keep hearing about that it is very good living there.” She looked around, looked upwards at the sky, and continued, “Do you know what I miss? I miss a clear blue sky day.” I was taken by surprise, but nodded. “I understand” I said.

“I grew up in a poor farm, but I liked growing bai cai. At the end of the day, we could sit in the fields and sometimes, take whatever extra harvest we have for our own cooking. The rest was sold, and used to pay for rent. The bitter gourd, it’s good to eat with pork. We didn’t get much pork, but when we did, once every three months or so, we would cook with bitter gourd.”, she shared.

I looked at her and smiled. Having given it my best shot, I still could not finish that bowl of fishball noodles that she had ordered impromptu on my behalf. She looked at me up and down, sizing me up, she said, “You eat too little.” And proceeded to take the bowl from me, finishing it off of its remaining contents.

“Tell me about how you live in Sweden” she said. “Sweden is near England?”

“Yes, near England.” I replied. “I live near the sea. So, we have a lot of fish in our cooking too.” I looked around and skywards towards where I expected the sun to be. “You have to get going?” she said. I nodded.

“The bookstore you are looking for is out from this street, to the left. You cannot miss it. There is an underground tunnel at the square you can take to cross the street. They have many books there.”

“Yes, well. Thank you.” I took the camera from where I had placed it on the table, and raised from the stool. I then offered to pay for the meal, but the lady refused payment from me, saying that it was her idea for me to join her that day. She then waved me off and away from her in goodbye.

Feeling ill at ease with a free meal, I found a few meters up the street, a shop selling custard filled steamed buns. Purchasing four in a bag, I returned to where the lady was still sitting, now chatting with the fishball noodle hawker, and handed over the bag of soft white steamed buns. With a broad smile, she took the bag from my hands, her hands clasping over mine, “Thank you” she said. “Now, be on your way, and don’t rush!”

I nodded, and with her directions to the bookstore in mind, made a left turn upon exiting that street.