Revisiting the one piece swimsuit 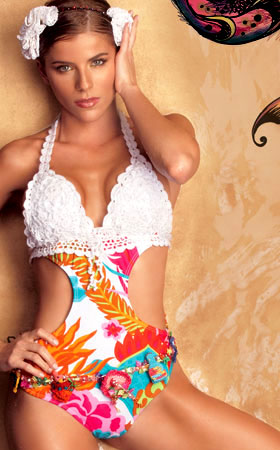 The Agua Preciosa, a young, fun, one piece cut out crochet top and multi-coloured bottom by Agua Bendita.

It seems that 1951 thereabouts was the last years in which the one piece swimsuit was seen as ‘tasteful’ for young women to don, after which a bikini clad Brigitte Bardot in Et Dieu… créa la femme (1956) and Brian Hyland’s song, Itsy Bitsy Teenie Weenie Yello Polka Dot Bikini (1960) created a locomotion for the two piece so strong that even the Vatican’s denouncement of the garment in 1964 did nothing much to slow down its popularity. Today, a search for “one piece swim suit” will currently render 1,472 hits on the US ebay site alone in the women’s swimwear section, whilst that of “bikini” renders 17,320 hits on the same site. From the two piece’s popularity, it seems the two piece (and its micro version) are most vogue these days on beaches around the world.

Still, I can’t help but revisit the one piece swimsuit (last I wore one was 8 years ago), deeming it more complimentary to the figure on some days, in accordance to some moods than others. My favourite find thus far is the Agua Preciosa (pictured above) from Agua Bendita that combines Colombian handicrafts with today’s precision laser cutting on fabrics for that perfect fit! Agua Bendita generally has a young, carefree approach to their swimwear. They also have one of the most colourful fantastic prints I’ve seen thus far. Other than swimwear, their collection features accessories such as pareos, belts, necklaces, earrings and bracelets and can be viewed at The Orchid Boutique.

Not only are the one piece swimsuits decidedly playful and young, but they can be rather glamorous when dressed with the right accessories. 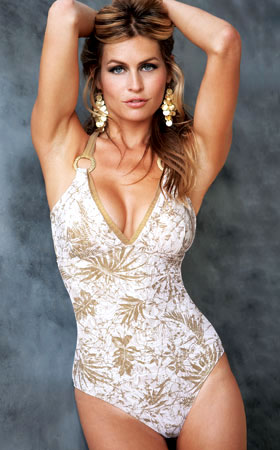 Asha DeMarcos have been seen on the cover of Sports Illustrated magazine, and their Gold Leaf halter one piece for example, features metallic mesh adornment that will catch the light when at the beach, in the water or on a yacht. Known for adding real gems to their swimwear, the gold rings at the top of the Gold Leaf halter is one such detail that adds jewellery to the garment. The small gold leaves print disperses attention from natural waist lines and should be forgiving on a temporary swell of an after lunch tummy. Asha DeMarco’s construction contains hidden stays, molded lingerie cups, hidden wires and adjustable straps and ties, a gamut of technology that keeps that swimwear in place and the wearer in shape! More of Asha DeMarco can be found at The Swimwear Boutique.

For more conservative one piece looks, Gottex is worthy of a browse. They offer soft cups in their swimwear construction for extra support, moderate coverage at the back and tummy control. 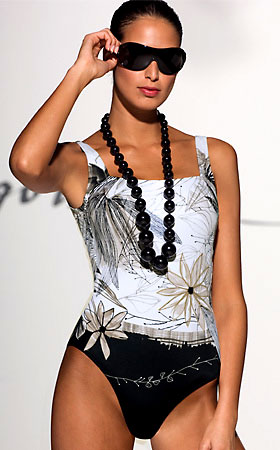 While the current conception is that the one piece is for the more mature or fuller figures, it can also be complimentary to Twiggyish figures or those with larger hip to waist ratios. So persons whose shoulders, waist and hips measure thereabouts the same, can look quite fabulous in certain one pieces or maillots. 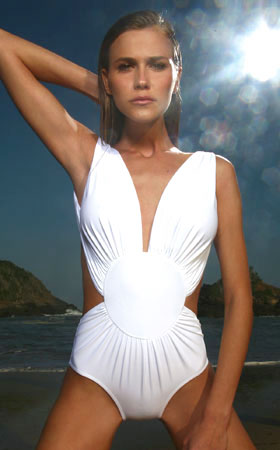 This Lenny Neimeyer maillot features a circular panel at the tummy with shirring detail, which gives the illusion of a smaller waistline. Lenny in Brazil has already launched their 2009 collection.

A rather new one piece is the swimdress. With a very wide target age group, both Juicy Couture and Swim Systems have a range of swimdresses for 2008. 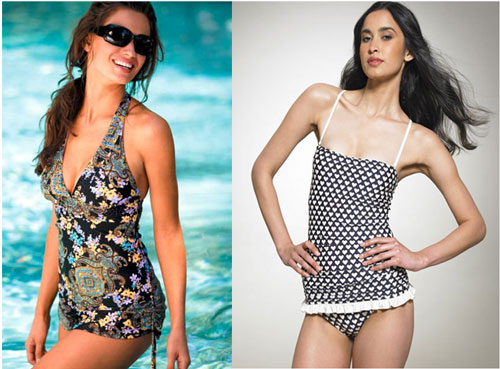 The swimdress is a rather incongruous design in that while it offers moderate coverage of the hips (for the mature market), the often frilly hip details (looking quite pre-teens / teens) calls attention to the hips nonetheless, with some Juicy Couture designs looking so lolita and dormitory, it’s difficult not to ogle the girls wearing them.

With the summer sales coming around these days, I think I’m inclined to hit the stores with a broader eye for swimwear, and perhaps even try on a swimdress or two, if I find them here.