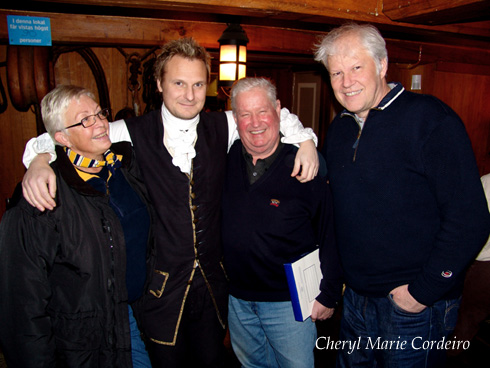 It was with their lives that sailors put out when they set sail to China during the 1700s aboard the Swedish East India Company vessels from the port of Gothenburg. Crew members had to endure storms, pirates, shipwrecks and sudden death. The attraction for them were money, adventure, the smell of warm spices and the possibility of a romp or two with exotic women from distant lands. All crew had to pay a mandatory hösapengen or homecoming money once the vessel reached the Equator. This money went into a big party when they came home again. Perhaps it was the idea of this feast, which lasted for three weeks, that kept up the spirits for the sailors when their teeth fell out in the aftermath of scurvy.

It couldn’t have a been better time to throw a staged homecoming party for the Swedish East Indiaman vessel Gotheborg III than in the wintry months of Sweden, when the ship is safely tarpaulined and docked.

Looking like a large white Christmas package at dockside, guests to the Hönsafest i juletid event that began in late November and continues through December 2009 in Gothenburg, were first invited for refreshments at the main warehouse before boarding the ship. 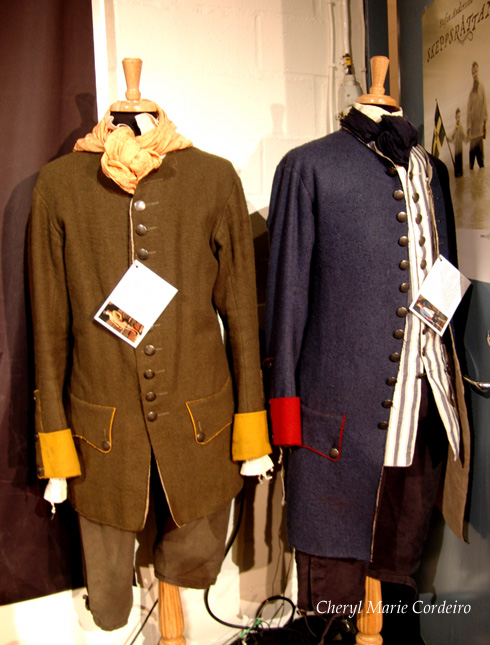 Menswear aboard the Swedish East India trading ships during the 1700s in Sweden. 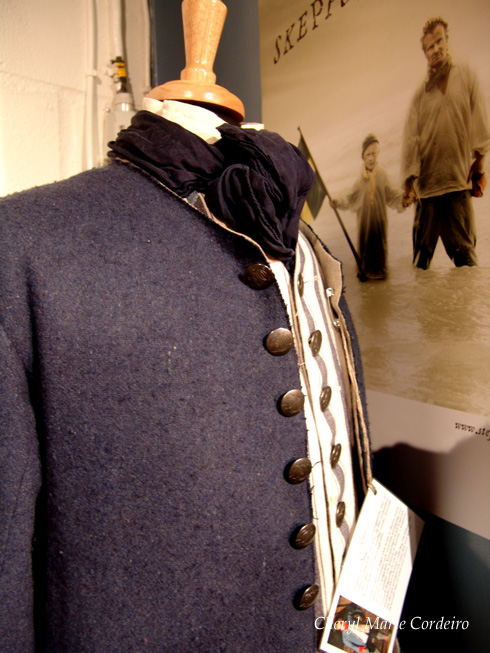 Cravat and brass button details of the men’s coat.

Apart from a brief history of the Gotheborg III project put up in pictures and the souvenirs one could buy at the warehouse, replica 18th century clothes can now be purchased.

The clothes of seafarers needed to be tough, so stout cloth was used such as ratine, barracan or camlet, where they could sometimes be waterproof when out at sea. Silk or velvet together with heavy embroidery were reserved for ceremonial dresses, clothes of occasion and to show one’s social ranking. The materials were invariably of dark colour and from the 1740s onwards, white stockings seemed to be of the rage. 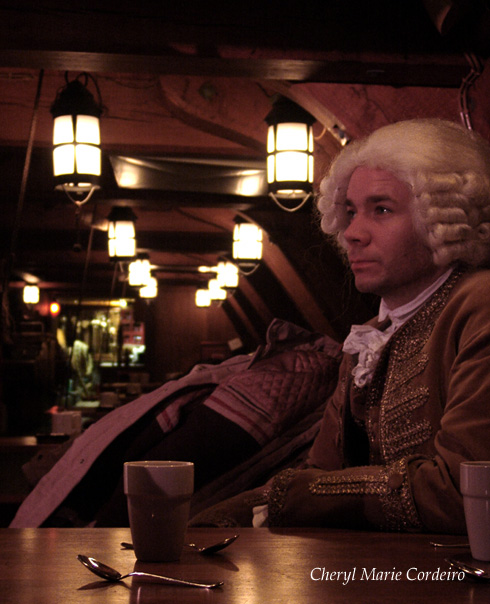 The supracargoes such as Niclas Sahlgren (1701-1776) were the modern day Directors of the Swedish East Indiaman ships and they had much more elaborate dress, with gold trimmings and embroideries to their velvet coats. Most men’s outfits had cravats that in this period showed very few modifications that is somewhat parallel to the modern neck tie. Shirt fronts and cuffs were elaborate, and coat cuffs were broad, coming almost to the elbow for men (see picture above). Wigs for men indicated their status, where apparently, white hair was valued because it made one look experienced and wise. Before 1740s, a full length wig was fashionable for men, whereas in the 1740s and 1750s, shorter, neater wigs that didn’t sweep the shoulders were preferred. 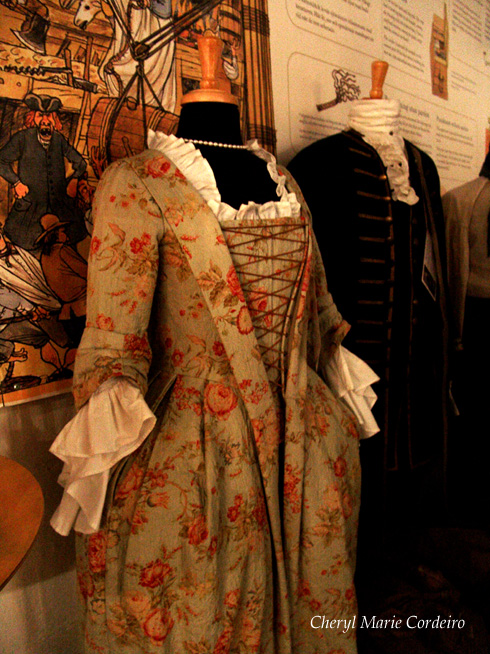 While there were many variations to women’s dresses in Sweden during the 1700s, the few pictured at the warehouse were made of cotton, with floral prints. Plain white trimmings at the collar and cuffs that were none too elaborate probably indicated a middle-class dress. It was during this time too that the process of quilting evolved and this helped make the clothes much warmer for the winter months.

After the warehouse visit and refreshments, it was onto Gotheborg III for the main meal, with more song and dance aboard after dinner. 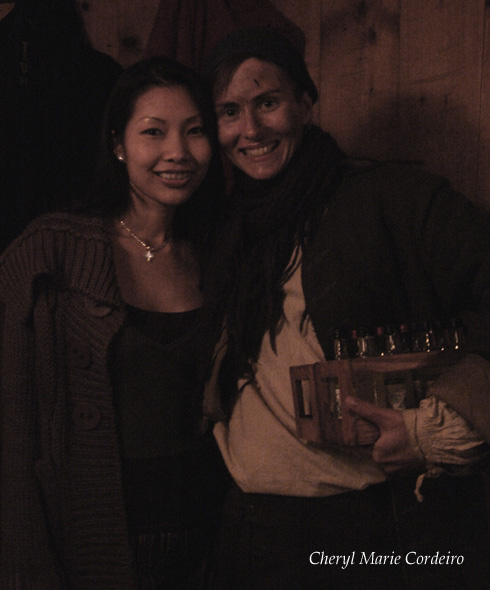 Myself, together with Johanna, whom I thought had a most beautiful voice! She formed part of the performing artistes for the evening’s entertainment.

It took some time to find our dinner table as it was full-house that day. Drawings by Lars Gilles of the dining area for the crew are quite accurate, where four individuals were seated on either side of the table, on a wooden bench that laid a table for 8. 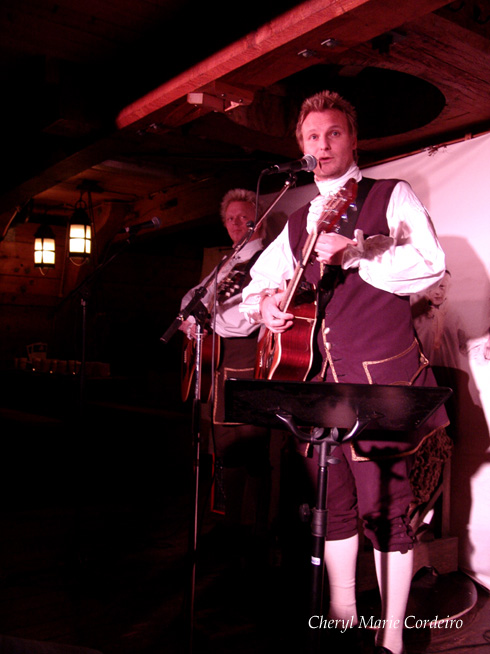 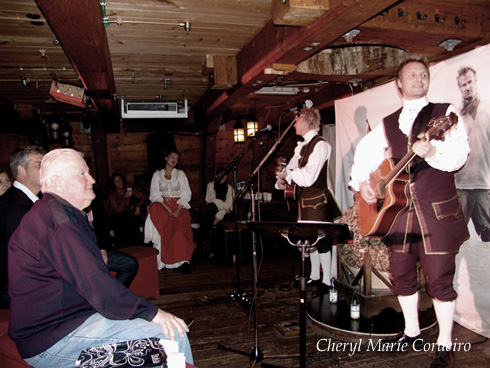 Anders Wäsfelt up front in the audience.

History has always moved Stefan Andersson and his lyrics and music often revolve around thought provoking historical themes. It was a live musical journey that evening with Stefan, where he sang songs from his latest CD release entitled Ship Rats. The songs here are a continuation of his previous effort Marstrandsfånge No. 90 Kleist, that told stories of prisoners, soldiers and the life during the time when Sweden was at war with Denmark and Norway. All artistes for the evening were clad in period clothing. 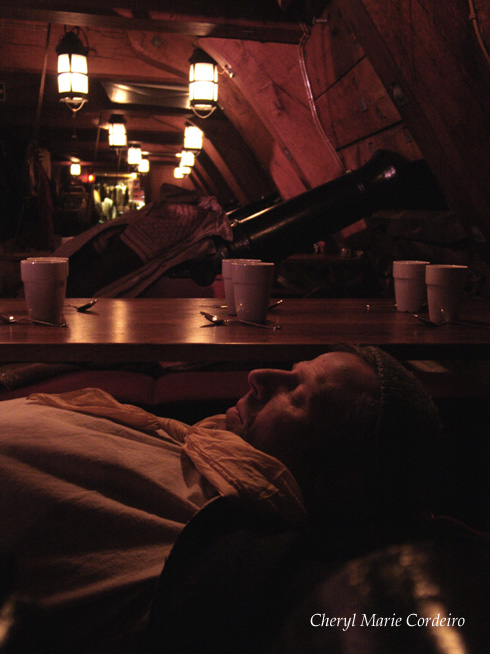 There was time for socializing after dinner and after the last song. And it was during this time that several topics of interest arose, including a discussion around the original logbook from the Gotheborg II’s Priest, Peter Holmertz. 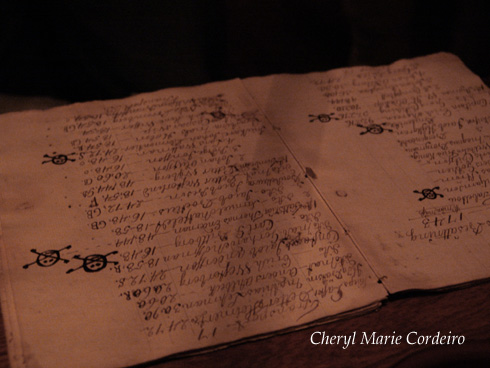 Original logbook from the ship’s Priest, Peter Holmertz who sailed with the Gotheborg II, ca. 1740s.

The skull and crossbones indicated those deceased during the voyage and the capital letters at the end of each row told of which other seafaring vessels they had previously worked. The numbers told of the seaman’s wages. 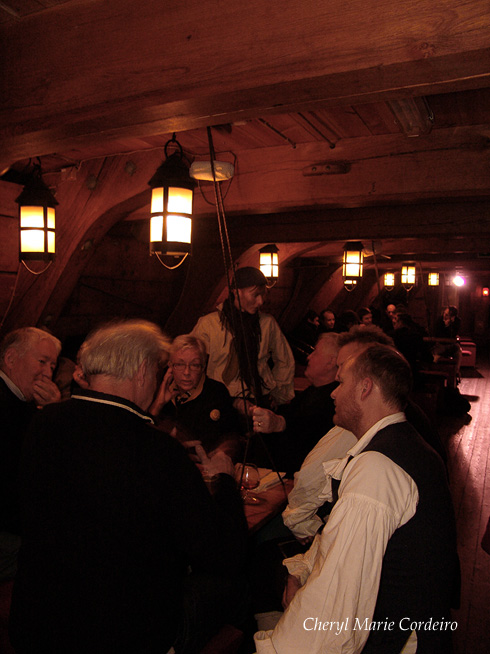 The event was rounded off by a round of warm brownies with whipped cream, complementary aperatiff and dessert wines. I thought it most enjoyable for this chance to visit the Gotheborg III in winter, its core and heart filled with fun and festivity in the coldest days of winter.

For a detailed and authentic account of the beginnings of the Swedish East Indiaman ship Gotheborg III project, visit Gotheborg.com Project