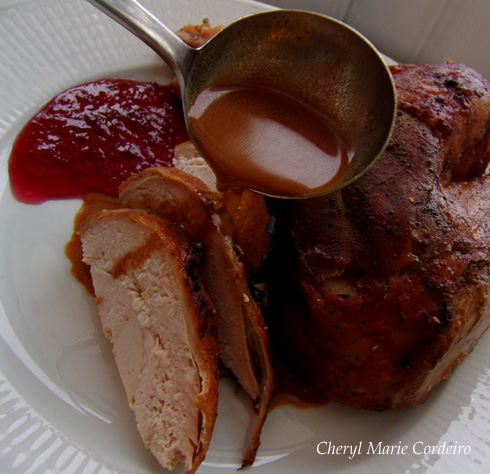 Growing up in the Eurasian tradition in Singapore, it was my family’s tradition to have a variety of meats especially during the festive seasons. Roast turkey was one for serving on New Year’s Eve. The smell of a roast turkey wafting from the kitchen is indescribably decadent and something I’ve always looked forward to come New Year’s.

Since being in Sweden, I have had little opportunities to bring over a lot of my food traditions, partly because I spend so much time exploring the new and traditional of Swedish cuisine. Come this weekend however, we decided to put turkey on the table! 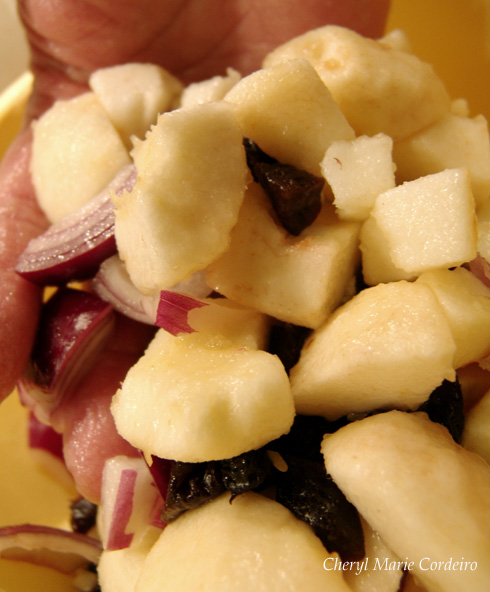 Having never baked a turkey before, this roast turkey experiment was something I had looked forward to for a long time. There isn’t much turkey eating traditions here in Sweden in general, goose being more common. Also celebrating Thanksgiving with a turkey is an American tradition and New Year’s in Sweden is often spent with salmon or roast lamb. 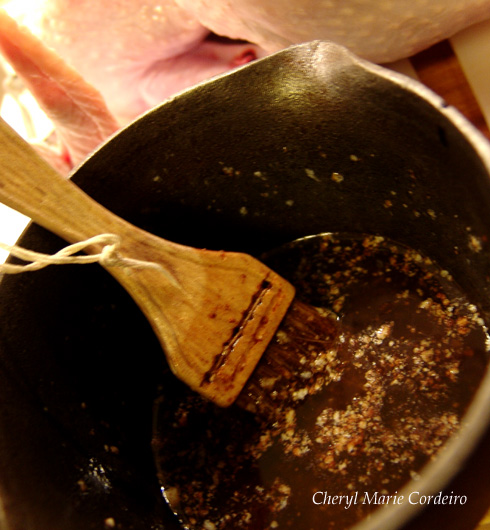 On the turkey, there is no need to go into the baking recipe here since all families have their own variation, simply search for “roast turkey recipe” and you’ll get about 800,000 hits.

What could be tricky for roast turkey is to have it adequately moist on the inside when serving. These modern big birds don’t fly much, so their muscle fibers tend to be compact, prone to difficult cooking. We solved this by stuffing it with a lot of apple pieces and some plums with the theory that the moist filling would help with the cooking. I am not so sure about that but, the results were alright for our roasted turkey. More important was to use as low an oven temperature that you believe you can get away with. We started by heating up the oven to 250 C before putting in the turkey. We let it bake for some 5 to 10 minutes, until we could see that the skin was starting to get some color. Then we lowered the heat to 150 C and kept that temperature until done. This is the way to go to bake perfect legs of lamb and we figured it would work with turkey too. 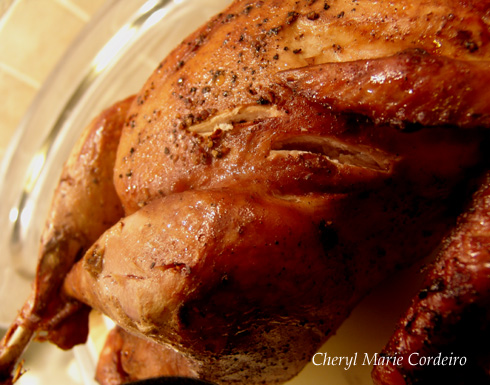 Once the turkey is out of the oven, it should sit for at least 15 minutes. This is because it’s about 80 C inside when it is done, all muscle fibers are very tense and all moisture is still boiling inside the bird when it is done. If you cut into it immediately, the moisture and juices will run out of it as air out of a punctured tire. So give it some time for the juices to be reabsorbed into the meat before cutting. Serve with a really hot sauce, and the meal as such will be perfectly temperate. 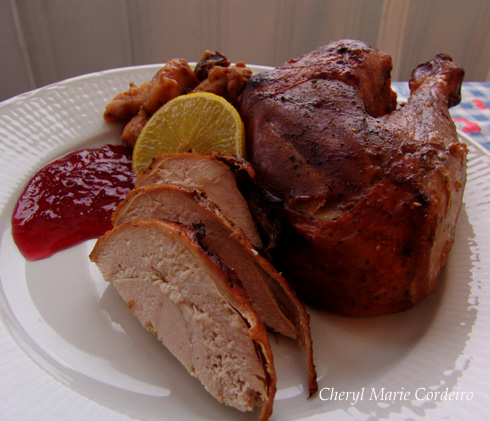 On a platter with homemade red currant jam.

As for cutting, there is the traditional Master of the House Norman Rockwell style, meaning you cut slices off the bird at the table, and there is a much better “butchers cut” (see New York Times), where you show the bird at the table and then take it aside and carve it in a more economical way. Our preference is for the butcher’s cut because you get so much more out of the bird than any other way.

The port sauce we made for the turkey was a little bit our own creation and it was a screaming success. I’ve jotted it down here so we don’t forget it ourselves.

Aim for about half a liter of sauce. Begin with the meat sauce from the pan, after removing and parting the turkey. Add some water, stir, whisk and strain into a new pot. Add a chicken meat cube and some soy sauce, black pepper and salt to taste. Once to your liking, add about half a cup red currant jelly, half a cup of cream and about 1 tbs of port. We used Sandeman Port in our gravy. Heat, stir till smooth and serve.

This turkey meal turned out heavenly! One way or another turkey has now found a place in our hearts as well as at our table. Perhaps Easter will be the next perfect opportunity to put turkey on the table or St. Valentine’s day that happens to fall on the first day of the Chinese Lunar New Year this year. All in all, the success of this meal in itself calls for some celebration.