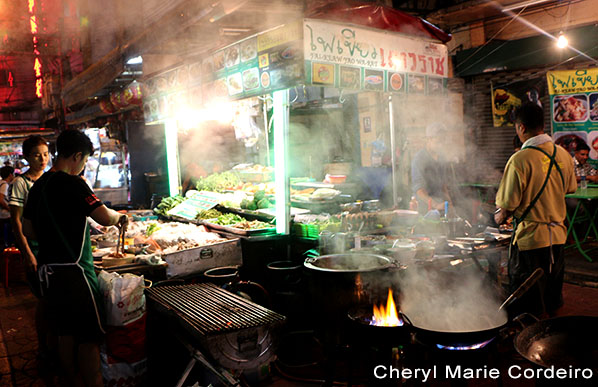 I had not often come across a decline in request to a destination, especially one in which tourists are encouraged to visit, but the tuk-tuk driver absolutely declined to drop us off at Chinatown in mid-morning in Bangkok, Thailand. “There is nothing there to see now. After five p.m. okay. But if you really want to go, I can drop you off at the corner 7-11 shop and you can walk from there.” He spoke to us through the rear view mirror of the tuk-tuk, his eyes meeting ours. After some contemplation, I asked, “Where would you recommend we go now? What is open?” His eyes lit up with a smile, “I bring you river tour! But first, I bring you to tailor shop? Very good suits for you, Sir!” He had already brought us to two other tailor shops, plus a jewellery outlet. So we kindly agreed to the river tour, but we didn’t want any more tailor visits. It was our turn to decline. “Only five minutes!” he intervened, “Very fast! You just go in spend five minutes, and then I get free petrol. Free petrol. You help me?” he said, unabashedly, with a big smile. He was already off to his designated shop. I turned to look at Sir and said, “I’ll probably find another cheongsam to tailor with Thai silk.” 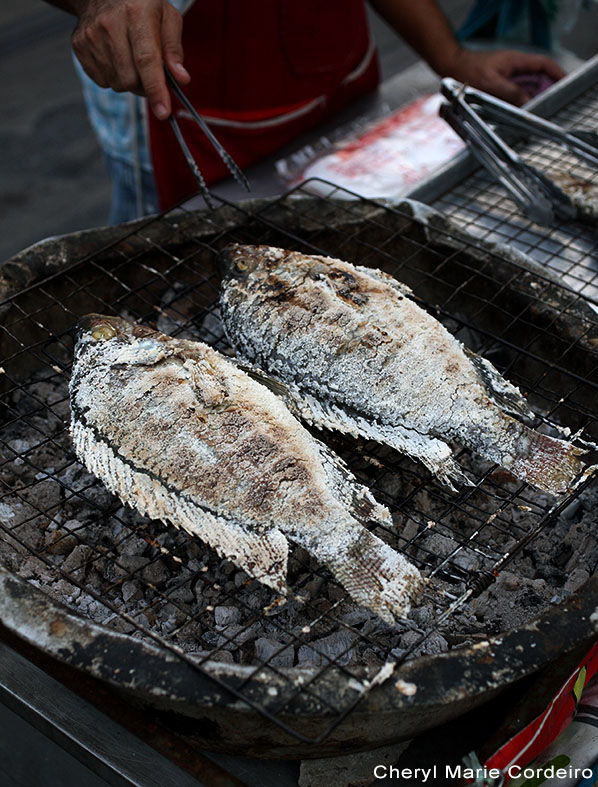 Salt baked fish prepared and sold at roadside in Bangkok. Contrary to what one might think, the salt helps keep the fish nice and juicy. To eat, you just peel away the skin.

We step back into the streets of Chinatown at the suggested time in the evening, after five. Although not only found in Chinatown, Bangkok’s street foods and street food culture is very much vibrant and alive in these quarters come sundown. The main roads are narrowed by night so that hawkers can bring out makeshift tables and chairs. The evening culinary activities spillover from cement pavement to asphalt that makes everything look festive on the most ordinary of days. Having grown up in Singapore from the mid-1970s, the scene that unfolds in Bangkok’s Chinatown is a throwback to Singapore of more than four decades. With the humidity in the monsoon season air, it feels a little bit like the heartlands of Singapore. I am seldom nostalgic, but what greets me as I stand in the middle of the street watching the crowds go by, I witness an atmosphere I remember from what seems now like yesterday, yet so long ago. I breathe in the air, a mixture of gasoline, tarmac dust and heated charcoals, there seems a bit of roasted squid grilling somewhere in the background, and decide that the evening smelled promising. Competition for diners between hawkers is vivid but never aggressive. There are enough customers to go around for everybody. What makes settling on a decided meal tough on the part of the diner is really that everything presented looks equally tantalizing, including the stir-fried crickets.

Spotting a hawker stall that specialised in hot soups, we thought the chef looked friendly enough and decided to settle by her steel tables and chairs. We ordered tom yam goong, a favourite of ours. What arrived, was not tom yam goong. Nonetheless, it was delicious. After tasting some, we gathered it was fish soup (of some sort). Towards the end of the meal, the lady of the stall herself gathered three more neighbours to join her in a dancing shrimp salad (goong ten). She smiled in our direction as she folded the shrimp salad between a leaf. Her pleasantly open demeanour was infectious and we told her that the soup she served was well done. The casual chatter of the three women around the dancing shrimp salad made me want to try that shrimp salad myself even if I could not decipher the talk. But that had to be another day’s culinary adventure.

Depending on how ravenous you are in stomach and eyes, perhaps the best strategy is to survey the entire quarters’ offerings and then go back to what most caught your attention for the evening. Failing patience for such a strategy, you could do as what I saw most visitors did, they walked and ate their way through the quarters, literally sampling the food as they went along. I know this because we had a combined strategy of surveying the quarters’ offerings, eating our way along the streets from stall to stall, going back to have what caught our attention most for the evening, and then bringing some back to the hotel. This combined strategy works but you might feel inclined to pass on the breakfast next day. On our part, we rationalised that we were there for only a few days, every couple of years in between.

And every once in a few years, it seems we get to experience a glitch in time, going back to a place that is where in another, it once was, on the tip of a well meaning tuk-tuk driver. 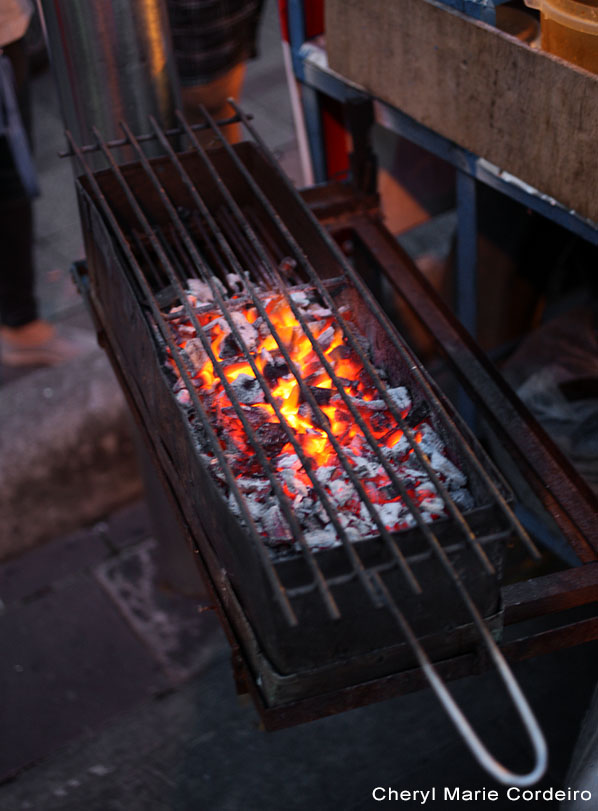 When the evening comes the barbecue pits are lit in preparation for the sate sticks. 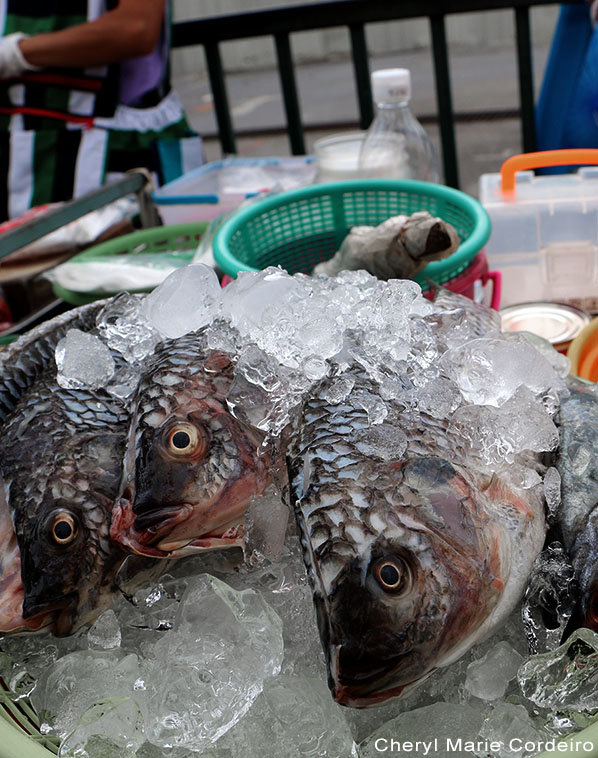 The durian could be expertly peeled by the sales person. Pretty much a necessity if you are planning to walk anywhere with these little buggers in a plastic bag since they are fiercely unpleasant to bump into. Unfortunately not as ripe as we had hoped. 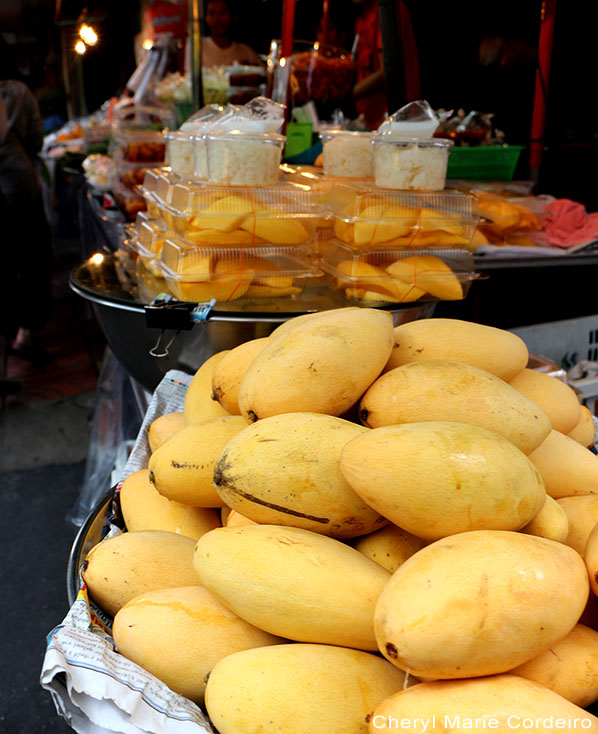 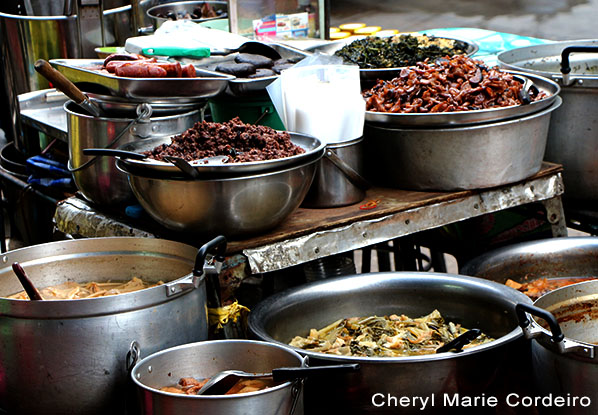 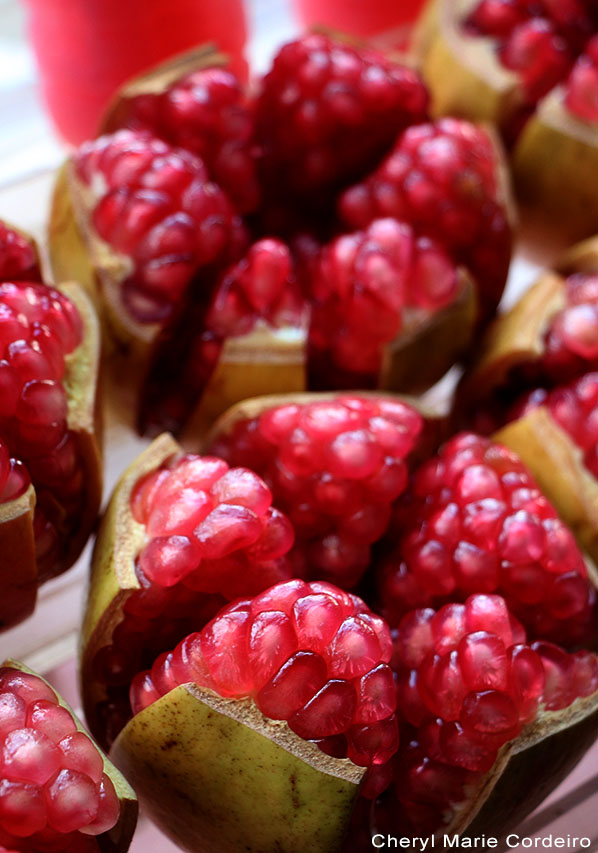 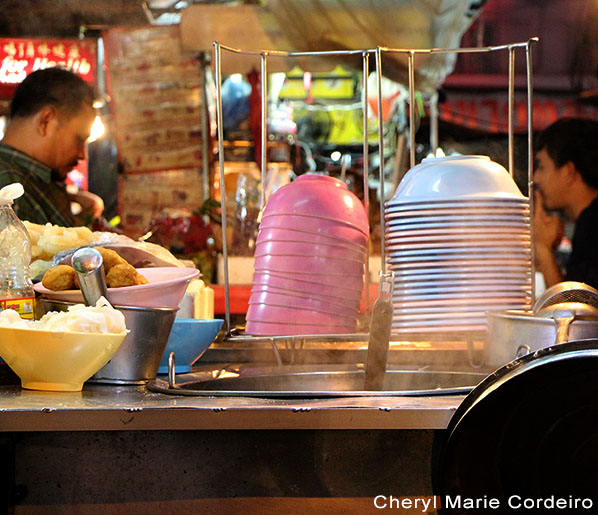 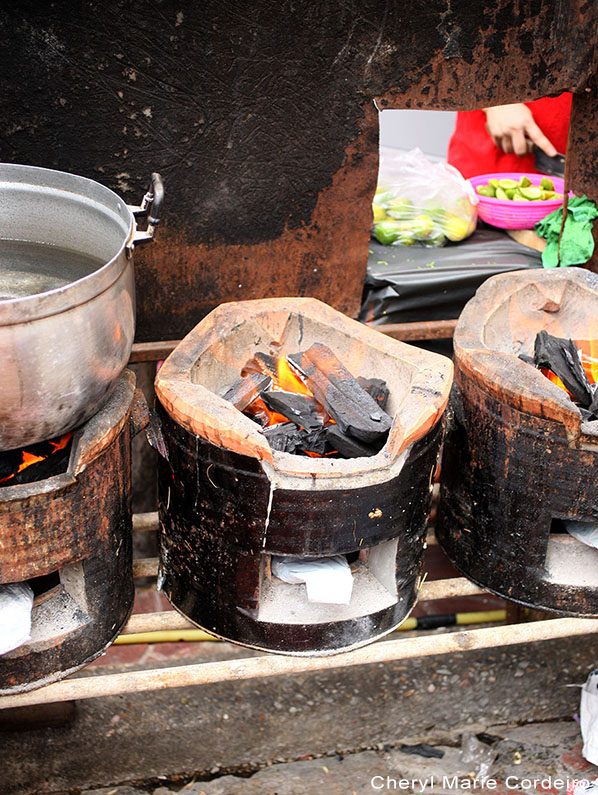 This order received came to us a little lost in translation. This was not tom yam goong. Delicious nonetheless, as most other street food dishes. Ahh, finally night. As the evening progresses the food stalls become ever more active. It’s like everything that everyone had been waiting for is finally there. Like Christmas, food Christmas, every night of the year.