A homebaked semla in hetvägg fashion 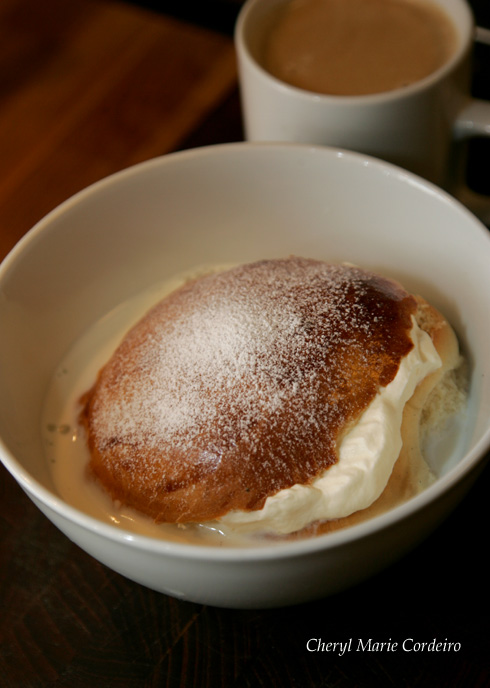 Eaten previously only on Shrove Tuesday, one of the last festive meals before the period of Lent leading up to Easter, it was not five days after the twelfth day of Christmas that in this time of mass consumerism that the shops in Sweden began selling some gorgeous looking semlor fully stuffed with whipped cream. As eyebrow raising as it was, I wasn’t one to complain finding ready made semlor in the shops because, I love these!

So decadent is the semla that it seemed to have contributed to the death of King Adolf Frederick of Sweden (1771) after topping off his already heavy meal with 14 of these buns! 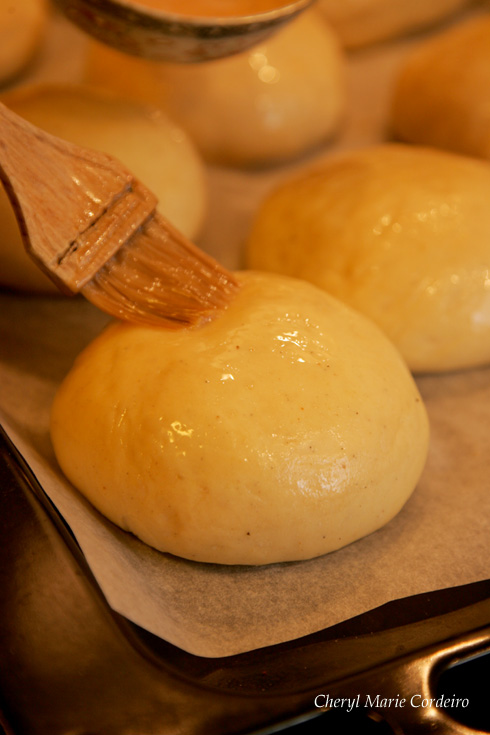 The buns are cardamom flavoured, much like the recipe used for the Swedish cinnamon rolls. You’ll find pictures on how to make the buns in this Cinnamon Rolls recipe post.

We got around to making a homebaked batch because you can never really have enough of these at home when it comes to semlor season! And yes, we realize that there isn’t any good excuse to be eating so many of these things, even if it were pre-Lent.

The buns are simply cardamom flavoured plain flour buns that are similar in dough recipe to the Swedish cinnamon rolls. Here’s our recipe for the dough:

Place all ingredients except the flour, butter and milk into a large mixing bowl. Then, the butter is melted and the milk poured into the melted butter. The mixture of butter and milk should be room temperature when you pour it into the larger mixing bowl. Stir till the yeast and sugar dissolves and then add flour till it comes into a dough. Set aside to rise for a few hours, covering the bowl with a tea towel.

After rising, knead the dough thoroughly and shape them into palm sized balls, placing them at equal distance on a baking paper lined baking tin. Cover with a tea towel and let rise again for about an hour.

After the second rising, glaze the top of the buns with a beaten egg and then into the oven at about 220 C for 15 minutes or until the buns turn golden brown on top. 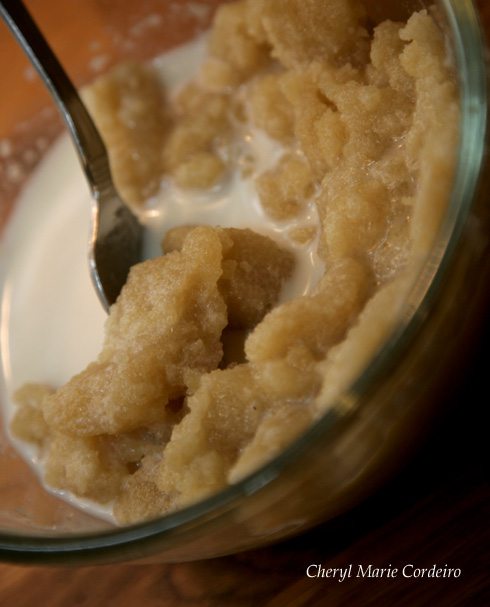 Almond marzipan filling for the buns.

While the dough is rising, you can take the time to put together the almond marzipan filling for the semlor buns. In Sweden, you can purchase almond marzipan off the shelf in the grocery store. And if you’d like to make your own, you’ll need finely ground almonds, icing sugar and a little milk. With the store bought marzipan, simply add milk to soften the marzipan to the desired consistency.

Get about 400 ml whipping cream and whip it to soft peaks. This whipped cream will go inside the bun, on top of the marzipan filling. 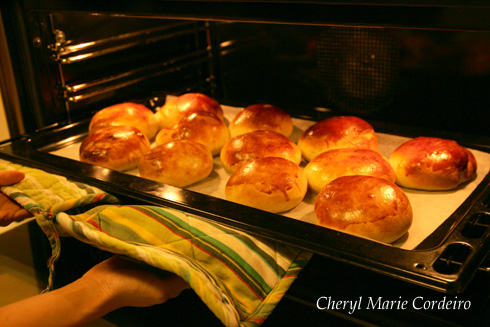 Semlor buns, out of the oven!

Once the semlor buns are baked and are golden brown at the top, you can take them out and have them cool on a cooling rack under a tea towel (so that the buns don’t dry out, especially in less humid weather). 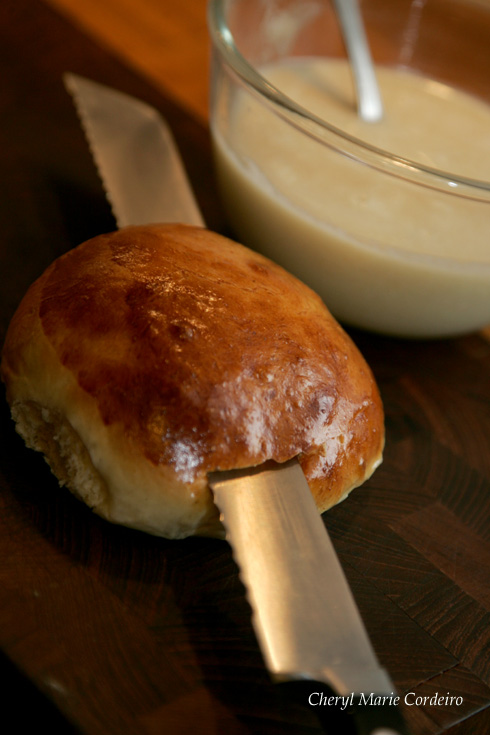 Making a lid on the bun.

To assemble the bun, you begin by making a lid on the bun, cutting straight across the top of it. Use a teaspoon to partially hollow the bun (depending on how much filling you wish for it to have) and mix the bread crumbs together with the marzipan in a bowl. 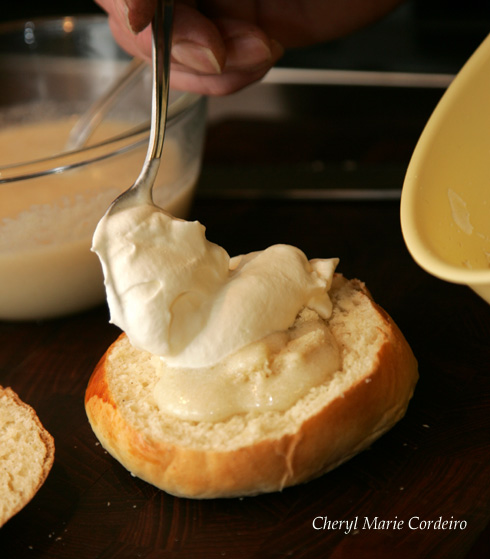 Filling the semla bun with almond marzipan and whipped cream.

Spoon the mixture of bread crumbs and marzipan into the hollow of the bun and then scoop a generous dollop of whipped cream over this. Place the lid back on top of the whipped cream. 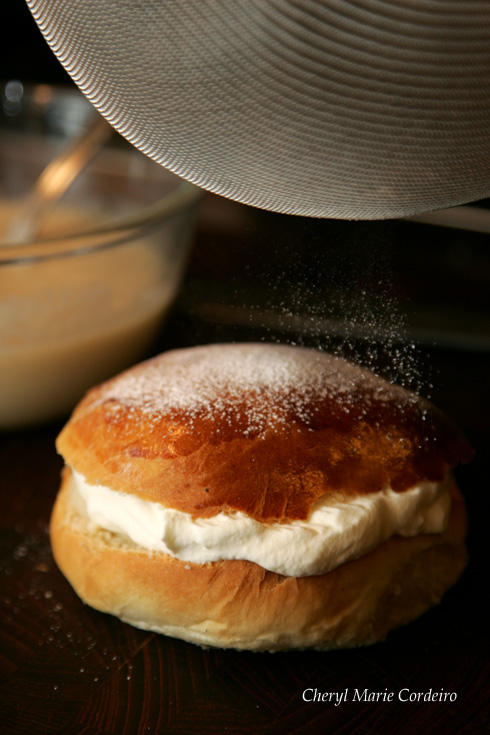 Dusting icing sugar over the lid of the semla bun. 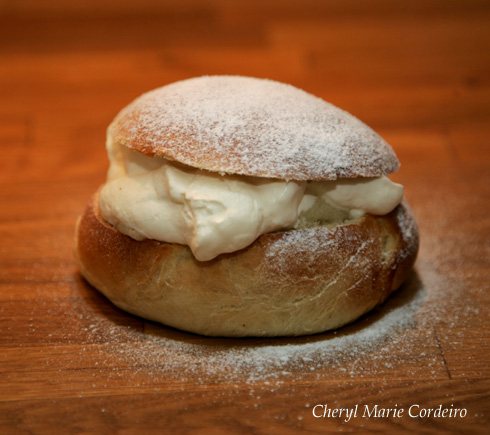 Serve as is or in hetvägg style in a bath of hot milk (shown in the first picture above).

The semla can be eaten as is or as I would prefer, in hetvägg fashion, which is the bun sitting in a bath of hot milk. Come -15C outdoors, which it is at the moment along the Swedish west coast, waking up to a semla in hot milk is sheer weekend heaven!

Other related posts on the Semla in Sweden: