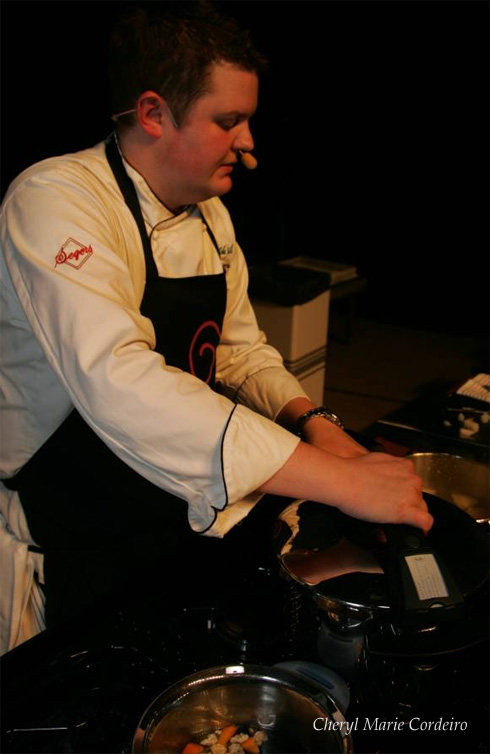 Award winning Best Meat Chef of the Year 2009, Fredrik Andersson, at Råda Säteri, was one of today’s celebrity chefs at the public cooking school organized at the Passion for Food Fair. After the demonstration we were all invited to sample the results.
Photo © Jan-Erik Nilsson and Cheryl Cordeiro-Nilsson
for Cheryl Marie Cordeiro 2010

Today was spent alongside the harbour front at Eriksbergshallen in Gothenburg Sweden. This hall was a part of the old Eriksbergs shipyard that was located here from the late 19th century. It has been given a face lift and been turned into a modern medium sized exhibition hall for specialist events that will not kill your feet or take days to cover. This time the hall was filled to the brim with the best locally produced, first class gourmet food that Sweden could muster. The fair is aimed at professionals, gourmet chefs and restaurants, and basically anyone with a serious interest in first class food.

If you’re a food enthusiast with a sincere interest in the culinary field, you’ll not be disappointed. This is the third consecutive year that this fair is held in Gothenburg and with the best stalls thus far.

It wouldn’t be too far fetched a guess that this food fair will soon create a niche for itself as a ‘must do’ event on the Scandinavian culinary scene. So I’d suggest that you take a look in the calender for next year if you are heading this way and try to make it to this event if it fits with your other plans and general interests. 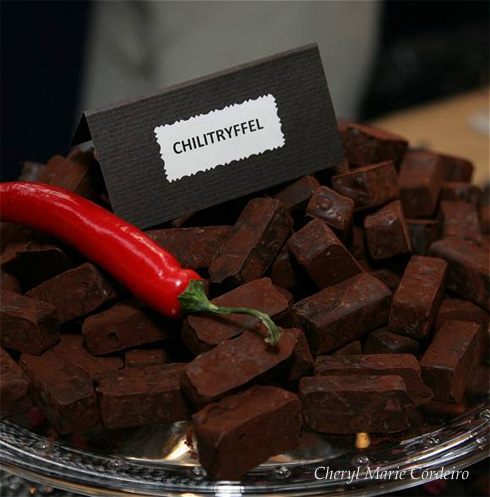 Chili flavoured chocolate tryffels at the Flickorna Kanold stand. No freebies though, but I actually didn’t ask. Brilliant chocolates though.

The exhibitors and organizers had gone out of their way to present something extraordinary for visitors. The atmosphere was friendly and warm and left you with if feeling that you had just said hello to a bunch of friends. The samples and free tidbits were very generously supplied. One of many that encompassed the traditional food fair feeling of generous samples and a happy smile, was Heberleins delicatessen. 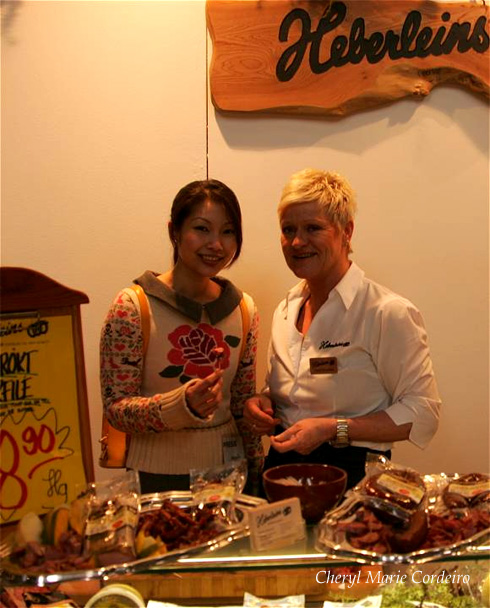 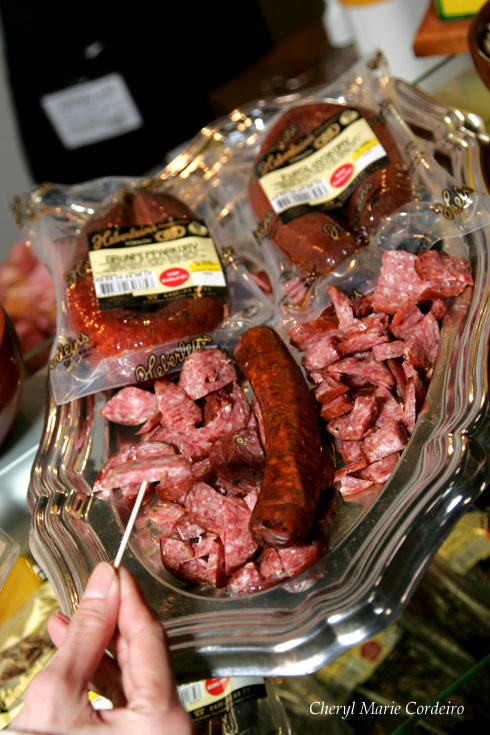 A sample taste of smoked sausage from Heberleins Delicatessen.

But there were more sample foods – everything from pumpkin and pomegranate soup to grilled meat and chocolate with dessert wines – than one could possibly consume in a span of a few hours. I thought the ample food samples a positive approach since it encourages visitors to try something new and encourage them at the same time, to bring something that they love back home with them. 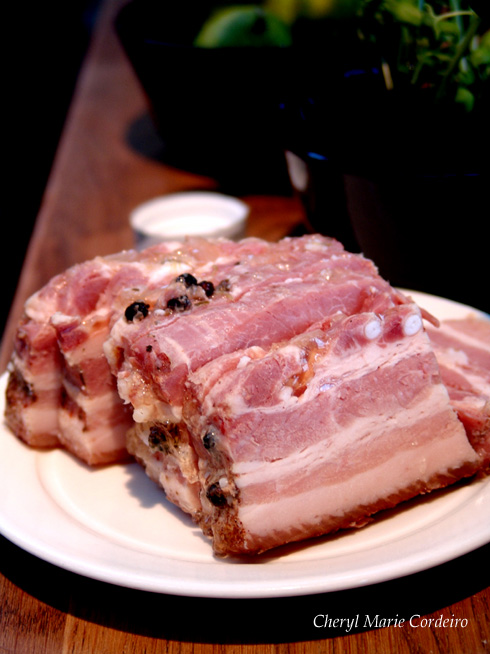 The special focus this year are Swedish local produce from meat, diary products, fruit, vegetables and poultry. As a country that is advanced in ecological and green living, the fair promises to educate and make available produce that is both environmentally friendly and heart-friendly. 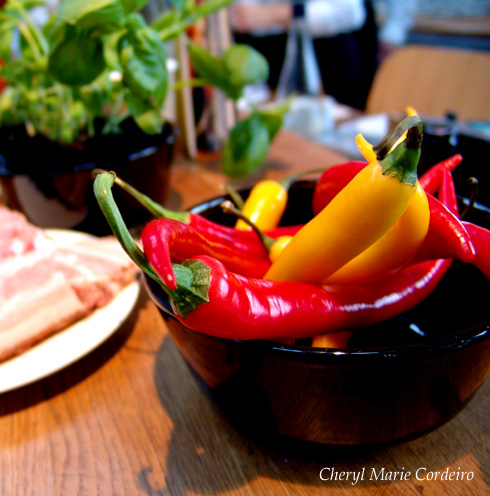 Displays that entice, yellow and red peppers stand at Svenska Gårdar’s stall while a chef puts meat on the grill.

One of the aims of the fair this year is to inspire visitors and home cooks to want to do more in their own kitchen, trying new foods such as wild game and elk / moose meat. Wild meat is still considered exotic by most Swedes where people tend to shy away from cooking as not much general knowledge is available on how to make a presentable dish out of such meats. 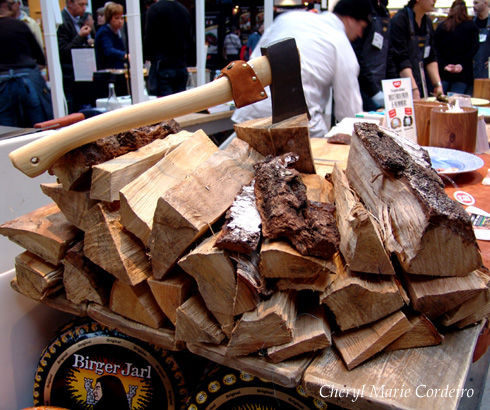 From Jokkmokks Korv Rökeri, where ham and sausages are smoked with Swedish birch wood under the midnight sun, in the north of Sweden. 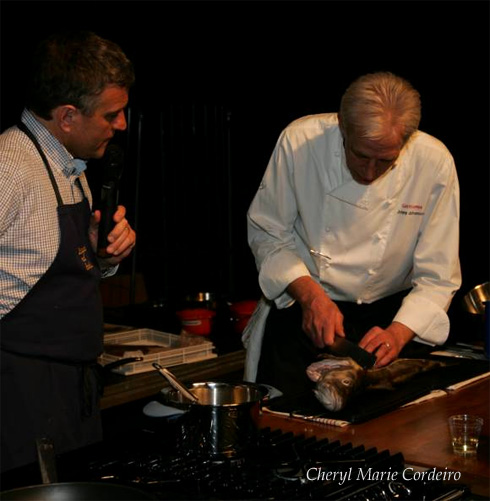 From left to right; Food edutainer and MC Anders Arnell and long time Nobel Dinner chef Johnny Johansson shows how to cook fish and explains how to tell it has been landed by Norwegian fishermen by just looking at how it is gilled. If restaurant schools were all as inspiring as this, I would sign up at once. Now this class was delivered for free, at the Fair.

To show how to use all these splendid produce that was on display the fair had invited an unbelievable group of gourmet chefs and food specialists for presentations that are inspirational, educational and beneficial for all. Visitors were invited to spend time with the chef and food edutainer Anders Arnell and the Western Sweden Academy of Gastronomy Preses Birgitta Rasmusson as MCs, several award winning chefs such as Fredrik Andersson (Best Meat Chef 2009) and our long time Nobel Dinner chef Johnny Johansson. They made their appearance in the fair’s open cooking school, and prepared meals in front of a live and expectant audience that by the end of the session was welcomed to sample the result. The cooking show will continue through the weekend with new guests during the remaining of the days of the fair. 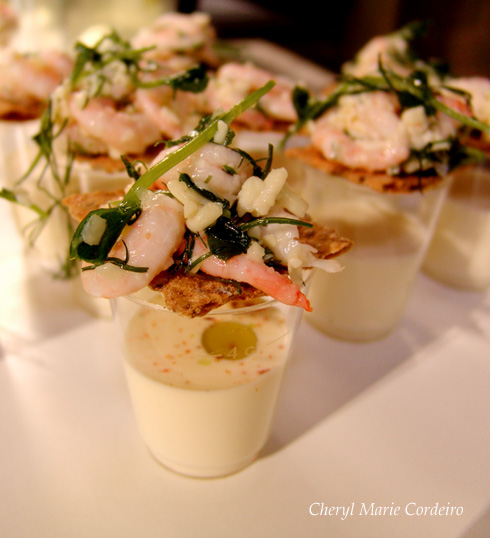 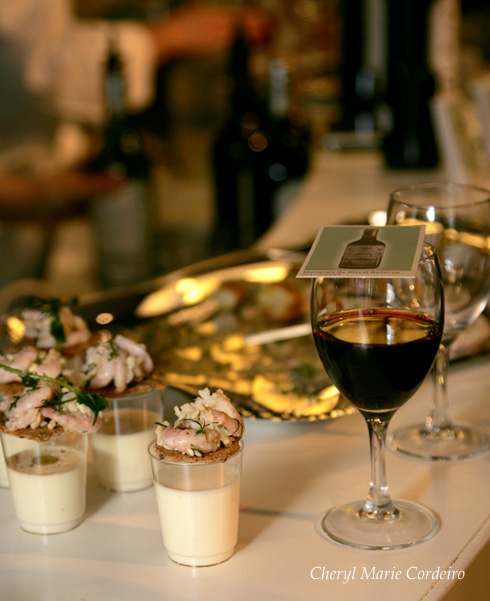 Personally one of my favourite samples came from a stall where they served wines from Spain and Portugal togethe with food samples by the well known chef Katja Palmdahl. The Marques de Riscal Reserva red wine is made from grapes that come from vines that are well over 15 years old of the Tempranillo variety, a variety of grapes that ages well and produces excellent colour and acidity to the wine. This wine has been aged in an American oak barrel. 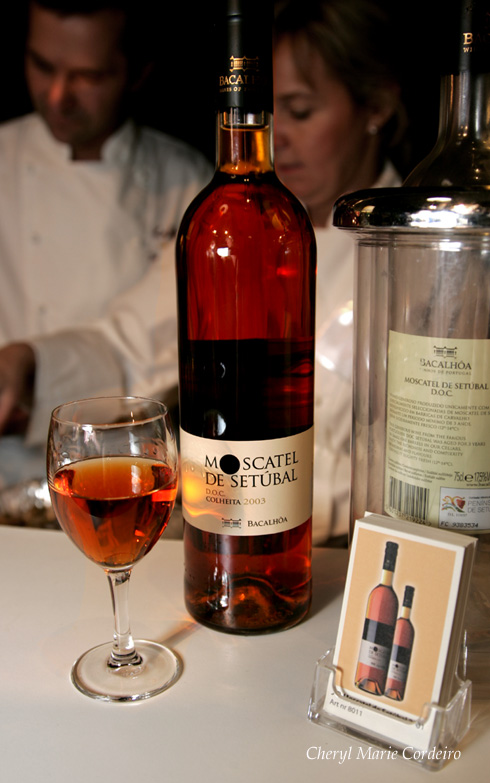 The same stall also presented a sweet dessert wine that tastes like an excellent, well rounded sherry, the J.P. Moscatel de Setúbal 2003. This wine is a jewel to find and a good example to how anyone can benefit from the hints of experts at this kind of events. This wine is relatively unknown, made from the Muscat grape and is a wonderfully aromatic mixture of apricots, raisins and honey that complements most soft cheeses and even cheesecake. The sale of alcohol is monopolized in Sweden so to buy for private use, you’ll need to do that at Systembolaget, one of many Swedish oddities that needs to be explained to foreign guests. But never mind, just take my word for it that this is how it works. 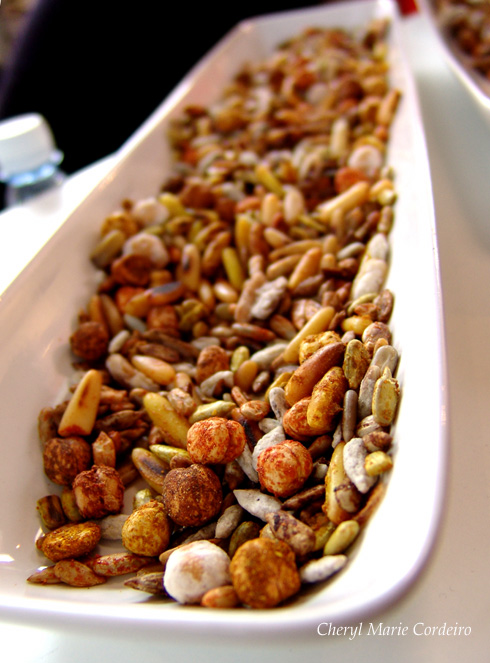 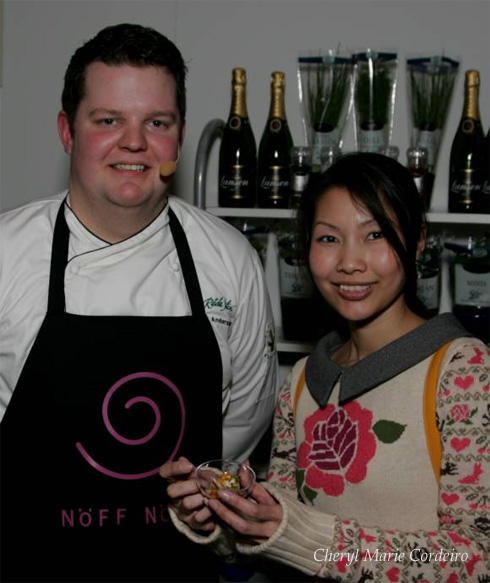 After the open cooking demonstration the audience were invited to sample the result. From left to right Fredrik Andersson, winner of Best Meat Chef 2009 championship and Cheryl Marie Cordeiro.

This food fair is one for those who have a genuine interest for food and new discoveries in the culinary sphere. Interesting stellar cooks who inspire and teach and even food competitions such as the Oyster Opening European Championship 2010 will be held over the weekend. It’s an event not to be missed if you’re in Gothenburg, Sweden!